The Pathways for Prosperity Commission on Technology and Inclusive Development examines how to turn the potential risks of technological change into opportunities for inclusive development.

Please note: this research programme has now been successfully completed. The work is being built on by the Digital Pathways at Oxford programme.

By bringing together a diverse group of leaders from government, business, and academia, the commission will inject fresh perspectives, ideas and evidence and drive a global conversation on inclusive growth in an era of technological disruption.

One of the most heartening stories of the past generation is humanity’s fight against extreme poverty. In just 25 years, the number of poor people has been cut in half, to fewer than 800 million. Whether this positive trend continues depends on how we respond to the new forces shaping our world – in particular, rapid technological change.

Most academic and popular discussion about new technology is focused on what it will mean for rich economies. There are limited studies on the likely impact on the developing world, especially the poorest countries. When there are discussions about the potential effects of new technologies they also tend to swing between optimistic and pessimistic extremes.

Policymakers in developing countries need practical, evidence-based guidance on steps they can take to harness technology’s potential for development and poverty reduction and mitigate against possible negative effects.

The Commission is led by three co-chairs: Melinda Gates, co-chair of the Bill & Melinda Gates Foundation; Minister Sri Mulyani Indrawati, minister of finance of Indonesia; and Strive Masiyiwa, founder and executive chairman of Econet. The Blavatnik School’s Professor Stefan Dercon, former chief economist of the UK Department for International Development (DfID), and Professor Benno Ndulu, former governor of the Central Bank of Tanzania, will lead the commission as its academic directors.

Pathways for Prosperity is founded and managed by the Blavatnik School of Government and funded by the Bill & Melinda Gates Foundation.

COVID-19 can push developing countries to improve the governance of digital technologies. 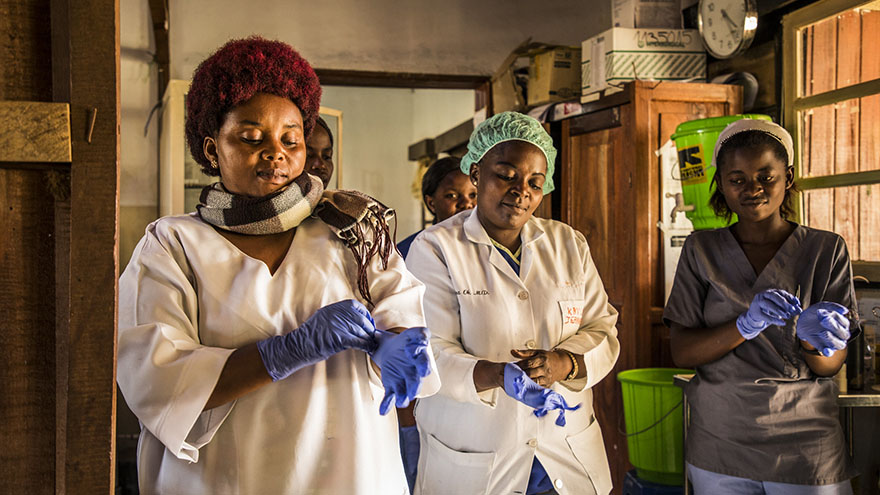 Countries around the world are adopting increasingly stringent policies to contain the spread of COVID-19, and digital tools have been important allies in governments' responses to the virus. The internet has of course proved invaluable to fill the void left by social distancing, allowing individuals to continue to work, study, and stay connected. Data from digital devices has also been used to track the spread of the virus and to map how populations move between locations.


On Easter Sunday, the UK Health Secretary Matt Hancock announced plans for a new NHS app to identify and contact people who have been in contact with COVID-19. Companies are already stepping up and offering innovative solutions of their own - such as the contact tracing API recently
announced by Apple and Google. Location data has already been used to trace the virus in countries such as Italy, Spain, Norway, and Belgium.

The use of location data and tracking apps has sparked a heated debate in these countries, and some experts claim there is not enough evidence to support the immediate deployment of these technologies. But for developing countries the risks are even greater. Poor and fragile countries will be hit the hardest not only because their health system is ill-prepared to cope with the pandemic, but also because they lack the right policy and regulatory environment to support the use of digital tools.

One concern is that governments using emergency powers are trying to expedite the implementation of new technology tools, often ignoring legitimate social concerns and the lack of appropriate safeguards. For example, less than half of low-income countries have data
protection and privacy legislation in force. In the absence of such laws, there
are no clear rules establishing what type of information is being collected, for
how long and where their data is stored, and who has access to it. This risks
undermining the effectiveness of developing countries' responses to the virus
and exposing already vulnerable citizens to additional harm. In Jamaica, the
government has used COVID-19 as justification to fast-track the implementation of a highly
controversial digital identification system. The Jamaican government hopes the
new ID system can help security forces to enforce curfew rules and to identify
citizens eligible to receive social benefits. A national ID system had already
been declared
unconstitutional by the Supreme Court, who found that it undermined the right to privacy.


Another key
issue from a regulatory perspective is how to ensure that countries will roll
back extraordinary measures when the need to fight COVID-19 subsides. Some of
the most realistic lockdown exit plans rely on the use of an unprecedented
digital surveillance apparatus, which will significantly increase governmental
intrusion into citizens' private lives. The Indian state of Karnataka, for
example, is using a new mobile app to check compliance with quarantine
rules. The app not only follows users' movements through GPS, but also asks
them to submit hourly selfies to prove they haven't left the house. The
government of Ghana launched a location tracking app that will inform the Immigration
Service telephone numbers of people who had recently been to COVID-19 hit
countries to monitor whether or not individuals are required to go into
self-quarantine. In Saudi Arabia, the app “Tawakkalna” (meaning "rest assured")
will help the government to monitor people self-isolating and in quarantine and
to manage movement permits.


Intrusive
measures such as these may only be justified during a state of emergency, and
even under extraordinary circumstances should be subject to
the rule of law. But
without the institutional checks and balances in place, these newly-built
techniques for citizen monitoring and control could easily be expanded to other
use cases and get entrenched in the long run. Improved legal certainty will not
only benefit individuals - in particular the more vulnerable ones - but will
also support businesses, as it minimises their risks.


The expanded
use of some digital technologies by governments also dovetail with the
interests of the private sector and it could become difficult to divest power
from the big tech firms who have accumulated it during the crisis. Data can be
very valuable in the fight against the virus now, but it can be also valuable
for commercial exploitation at a later point. The private sector is playing a
critical role in finding innovative solutions, but in the absence of clear
rules and processes governing these technologies, there are no assurances that
health data provided to fight the virus now won't be used for different
purposes in the future - for instance, shared with health insurance companies.
Big tech companies are already seeing an increase in their user base - with Google's YouTube audience
soaring in the past weeks. The pervasiveness of their devices and applications
also make them strong candidates to win the battle for the market of digital
contact tracing solutions and could entrench their dominant position even
further.


But not all
is doom and gloom. Despite the many challenges, COVID-19 could be a catalyst
for positive regulatory change in developing countries. The absence of laws and
policies governing the digital space raises important concerns for low- and
middle-income countries, but it also presents them with an opportunity to use
the crisis to build a positive regulatory legacy. As our research at Digital Pathways shows, good governance of technology
is key to help the poor and most marginalised people to harness the benefits of
digital transformation.

The crisis has brought to light regulatory issues that have long been overlooked by policymakers. The National Bank of Ethiopia announced a directive allowing non-financial institutions to offer mobile-money services. Alongside opening the financial services market to telecom companies, the measure also encourages people to go cashless and to avoid trips to the banks, helping to control the spread of Coronavirus. In
Ghana, the Monetary Policy Committee (MPC) waived the requirements for additional documents (such as ID and proof of address) to open a basic mobile wallet, making mobile money technology more accessible - in particular to women and vulnerable individuals. The South African telecom regulator released additional broadband spectrum to meet the increase in internet demand during the lockdown. The new licensees are required to support and create virtual teaching and remote classrooms, paving the path to expand the use of educational technology solutions. These are only a few examples of the many ways the pandemic can push developing nations to ramp up the use of digital services in a more inclusive way.

It is true that developing countries often lack the capacity and institutions to design and enforce digital regulation, and trying to build the plane while piloting it will undoubtedly be a difficult task. But there is no better time to take action than now. COVID-19 has exposed existing fragilities in developing countries' technology governance regimes, but for governments it also represents a golden opportunity to bridge regulatory gaps and to design and implement important digital regulation that will outlive the crisis.

Beatriz Kira is a Senior Research and Policy Officer for Digital Pathways at Oxford, which builds on the work of the Blavatnik School's Pathways for Prosperity Commission.

The future of work in Africa

Digital technologies and the developing world

In Tech Tonic podcast, Stefan Dercon explains the findings of Pathways for Prosperity new report and how, used wisely, technology can enable development

The Digital Roadmap: How developing countries can get ahead

How can digitalisation be an 'enabler for development'?