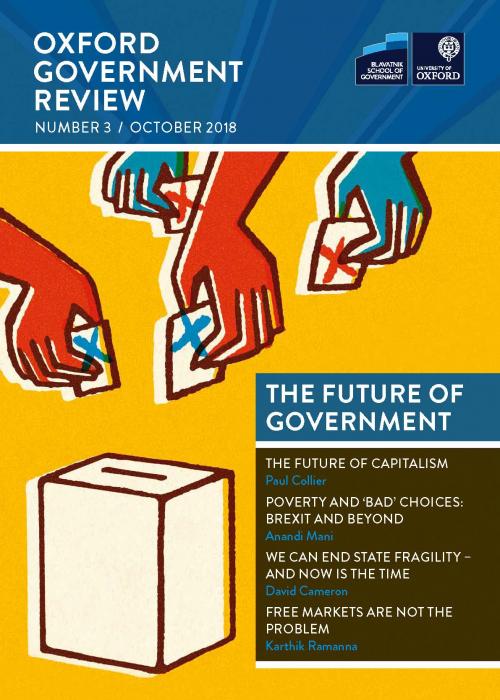 "Amidst a lot of pessimism, the world needs bold and creative thinking about how to govern, how to unite societies, and how to foster entrepreneurship, jobs and growth. This new issue of the Oxford Government Review seeks to spark such thinking." Professor Ngaire Woods, Dean of the Blavatnik School of Government

The third issue of the Oxford Government Review focuses on the future of government and features a selection of the most recent and compelling thinking from Blavatnik School faculty and external contributors who have worked closely with us.

Karthik Ramanna proposes returning some common sense and morality to the free market, while Paul Collier looks at where capitalism went wrong and how to get it back on track. Pepper Culpepper highlights the place of banks and “banklash” in the current malaise, while Emily Jones considers the global nature of financial regulation.

Inequality is rising. Jo Wolff asks how we can promote egalitarian living at the city level, while Anandi Mani looks at how poverty affects decision-making.

Several of our writers consider innovation in the way governments serve their citizens: Mara Airoldi reports on the exciting work being done in the Government Outcomes Lab; Diego Piacentini, who led the Italian government’s digital transformation, shares the challenges and successes of his work; and Kamal Bhattacharya, a Commissioner on the Pathways for Prosperity Commission, discusses the potential of AI for developing countries. Running with the theme of changing technology, Dapo Akande looks at the ethical and legal issues posed by new military methods.

Our writers also consider the functioning of democracy. Our alumna Quratulain Fatima looks at women’s participation in the recent Pakistan elections, while Julien Labonne stresses the importance of good information for voters about campaign promises. Former UK Prime Minister David Cameron shares the thinking of the Commission on State Fragility final report and suggests that, in fragile states, rushing to elections isn’t the answer.