The third issue of the Oxford Government Review pulls together a selection of the most recent and compelling Blavatnik School thinking.

All around the world, governments are having to face greater challenges than ever, both at home and on the international scene. The rise of populism, the backlash against globalisation and the potential disruption caused by new technologies are just some of the issues that make governments’ work harder, and their future uncertain.

“Amidst a lot of pessimism, the world needs bold and creative thinking about how to govern, how to unite societies, and how to foster entrepreneurship, jobs and growth. This new issue of the Oxford Government Review seeks to spark such thinking.” Professor Ngaire Woods, Dean of the Blavatnik School of Government 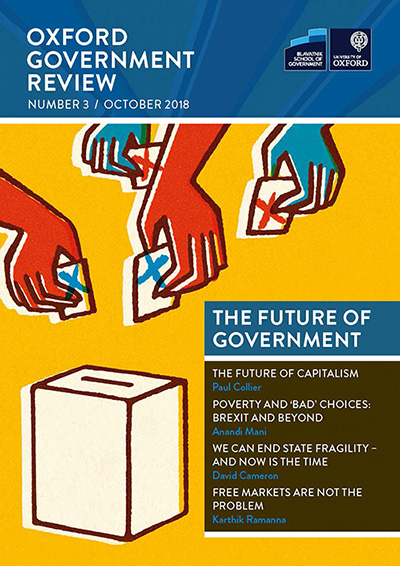 Amongst our academics, Paul Collier puts forward a new vision to ensure that capitalism works for everyone; Karthik Ramanna argues that it’s time to return some common sense and morality to the free market; Pepper Culpepper’s project brings together three elements of democratic response – policy, public opinion and the media in relation to the banking crisis.

Inequality and ‘bad’ choices are the topics of articles by Jonathan Wolff and Anandi Mani, respectively, while Mara Airoldi explores the debate about the outsourcing of public services.

In this issue, readers will also find articles from practitioners who have been closely involved with the School, such as the UK’s former prime minister David Cameron, who co-chaired the Commission on State Fragility, Growth and Development. Diego Piacentini, who leads the Italian government’s digital transformation and was one of the speakers at this year’s Challenges of Government conference, shares the challenges and successes of digitalising the Italian public service, while Kamal Bhattacharya, one of our Pathways for Prosperity commissioners, discusses the potential of AI for developing countries.

Finally, we asked Quratulain Fatima, a Master of Public Policy alumna, to explain what the government of Pakistan has done to address the issue of female voter turnout in the recent elections.