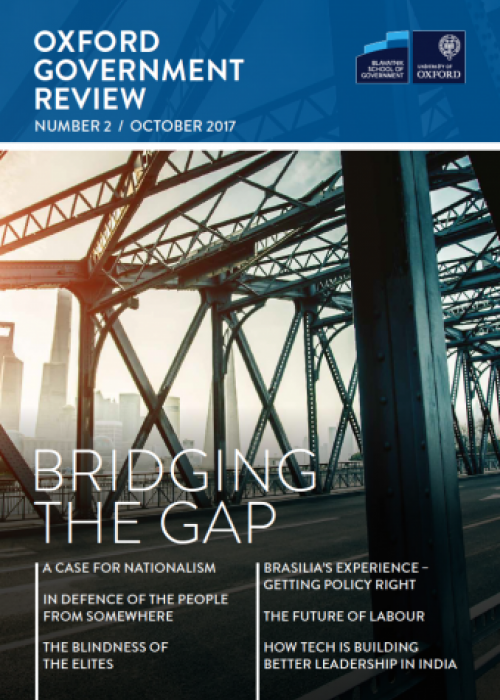 “Across the world a political revolt is unfolding, fuelled by growing gaps between the general population and the ruling elite. Politically, many people no longer feel that mainstream political parties and candidates represent them. Economically, the gap between the 1 per cent and the rest is accelerating and in many countries jobs are becoming more precarious and less likely to lead to a rising standard of living. Socially, across most of the world the opportunity for better education, health, housing, and other services is becoming more distant, and societies are becoming more fragmented and fearful. The result is a growing discontent not just with established politicians, but with longstanding institutions of government.” Professor Ngaire Woods, Dean of the Blavatnik School of Government

The second issue focuses on the divide between voters and the elites. Inspired by the conversations and discussions of the 2017 Challenges of Government Conference, our contributors reflect on how to bridge the political, economic, and social gaps that have generated a revolt against the status quo.

Blavatnik School of Government’s Tom Simpson and Maya Tudor discuss nationalism as part of the solution, while former Israel minister Yuli Tamir reflects on the "liberal blindness" which is driven by rationality and individualism. Leany Barreiro Lemos, secretary of state in Brasilia, brings the successful experience of her city. Blavatnik School's Jonathan Wolff explores the questions raised by technological change for the future of employment, while Janaagraha's Srikanth Viswanathan discusses how technology can enable large scale citizen participation.