Heading to the negotiating table 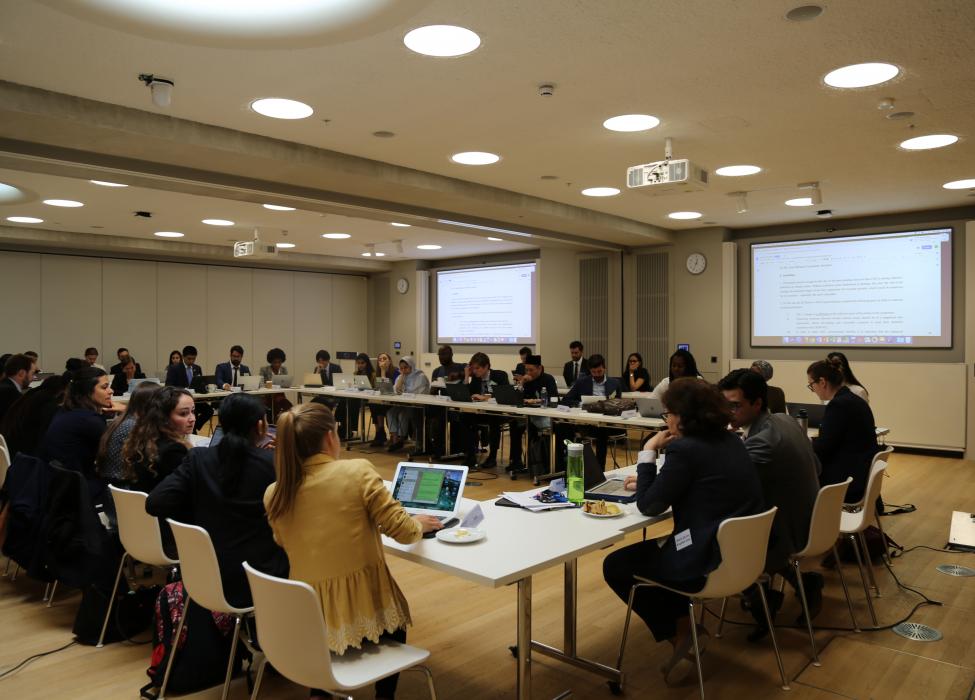 One of the primary goals of the Master of Public Policy is to equip students with the ability to move outside purely theoretical frameworks and apply their knowledge to real-world scenarios. The Policy Challenge simulations, which took place last week, allow students to draw on what they have learnt throughout the year as they take to the negotiating table to tackle real-life policy challenges.

This year, the Policy Challenge module is split into three themes: climate, trade and, for the first time, counterterrorism. Following weeks of preparatory research, lectures and expert briefings, students took on the role of key figures representing countries or political interest groups and entered into negotiations. While topics may change from year to year, the simulations always require students to engage in strategic thinking, persuasion and teamwork to achieve the interests of the party they represent, as well as develop an in-depth understanding of wider issues surrounding the negotiations.

The climate talks simulated the United Nations Framework Convention on Climate Change (also known as COP25) conference, just six months before the real one takes place in Chile. With the action of governments currently deemed insufficient to keep the global temperature rise below 1.5 °C, the COP25 climate talks offer a crucial opportunity for countries and other actors to commit to more ambitious action. For our students sitting at the negotiating table, reaching an agreement on how to do so required maintaining an awareness of the various economic, political, legal and social challenges surrounding the climate change issue.

The trade simulation reflected the last stages of the Trans-Pacific Partnership (TPP) negotiations in 2015; despite US withdrawal in 2017, the TPP remains the most far-reaching trade agreement in existence and continues to set the bar for contemporary trade negotiations. Students were required to look beyond purely trade-related issues to navigate the complex geopolitics that this sort of negotiation entails. Barbara Weisel, Ambassador Koji Tsuruoka and Ambassador Roberto Zapata (Chief Negotiators for the TPP for the US, Japan and Mexico respectively) shared their first-hand experience of the process and advised on negotiating tactics.

The complex intersection of technology and counterterrorism was at the core of the third simulation, which was split into two scenarios. One scenario looked at regulation of social media platforms hosting content likely to incite acts of violence, and another focused on whether tech companies should create ‘backdoors’ to allow governments to access encrypted data from the devices of suspected terrorists.

“The counterterrorism simulation was deliberately a bit different from the other two, in that the students had to grapple with a fairly new issue,” says Anna Petherick, Departmental Lecturer in Public Policy at the School and co-convenor of the counterterrorism simulation. “They had to understand the underlying technological issues, as well as take into consideration more conceptual matters like free speech, personal freedom and to what extent the state has the right to intervene. It’s been really impressive to see how they’ve gone about creating new legislation from scratch.”

Outside of the official negotiations, groups of students convened across the building – whether in seminar rooms or in corridors – forming alliances and delving into the details of their respective agreements. Lione Alushula, an MPP candidate from Nairobi, said: “The trade simulation was a quintessential example of how negotiations ‘away from the table’ influence the final result ‘on the table’.”

Emily Jones, Associate Professor in Public Policy, was pleased with the outcome of the trade simulation, in which a successful agreement was reached. “The students did an incredible job in getting to grips with everything. Trade deals are incredibly wide ranging and, on top of that, they represented a really diverse group of countries and worked out how their audience at home would react.”

After an intense two days, the Policy Challenge once again provided a valuable learning experience of the realities of multilateral negotiations, and proved to be an exciting end to the term before the students head off on their summer projects.