An exciting day of policymaking for local school students 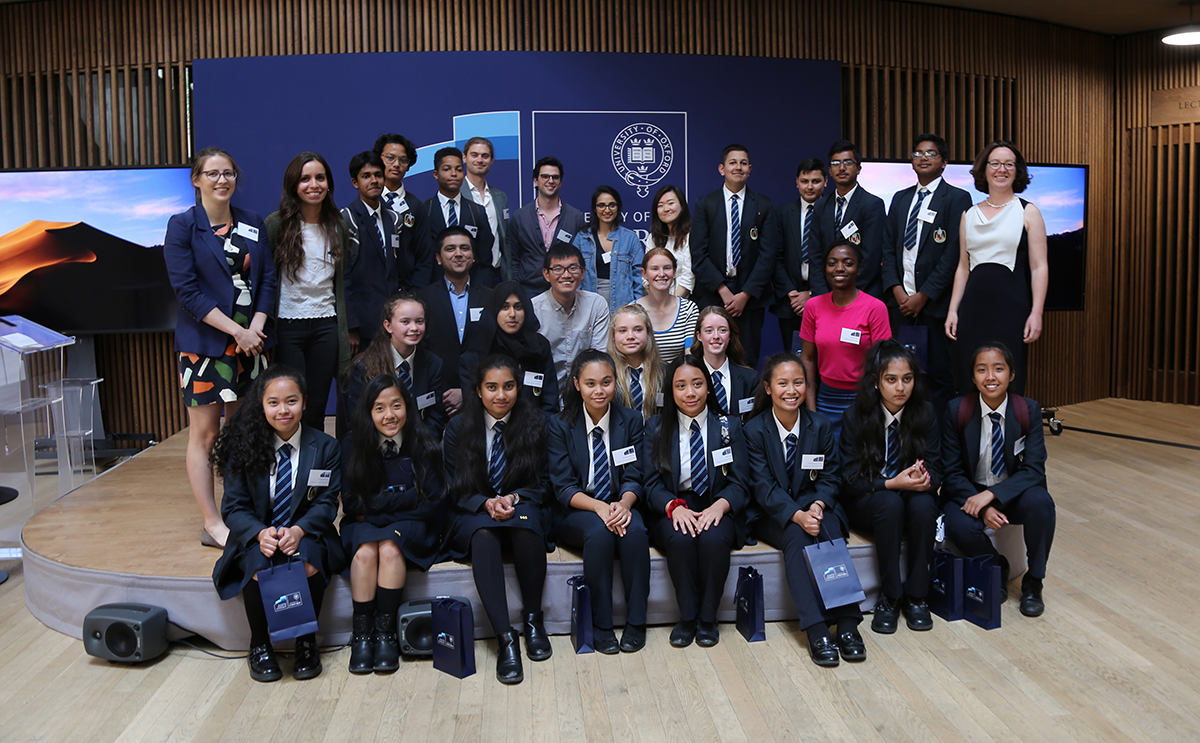 Last week, a group of Master of Public Policy (MPP) students took a break from the pressure of final deadlines to welcome local school students into the Blavatnik School for a day of hands-on policymaking. Now in its third consecutive year, the event, which was supported by the City of Oxford Charity, saw 19 students from St Gregory the Great Catholic High School in Cowley come to take part in the Policy Slam. This year the school students took on the role of policy advisors, preparing a presentation to advise ‘ministers’ (played by MPP students) on one of two chosen policy issues.

The day started with a welcome talk from Adam Webster, Departmental Lecturer in Law and Public Policy and Co-Director of the MPP, who shared his own trajectory from growing up in rural Australia to becoming a lecturer at Oxford. He encouraged the group of 14- and 15-year-olds, who will be facing decisions about their future as they take their GCSEs (the academic qualification taken by pupils aged 14–16 in England, Wales and Northern Ireland), to think about the issues that are important to them and pursue what they are passionate about.

The students then split into groups with their MPP student facilitators and were briefed on the subjects on which they would be presenting. One group were tasked with advising a minister on a new health campaign, with the other group looking at whether the UK government should increase its spending on space exploration.

As the students brainstormed their ideas, the MPP facilitators encouraged them to consider issues from every angle, pre-empting any criticisms they might receive from the ministers. They also got a taste of the competing interests that policymakers have to deal with as they moved on to a session with ‘subject matter experts’, consisting of MPP students representing different political interest groups.

Throughout the day, both groups considered a wide range of questions surrounding their policy issue. The science group discussed how to justify an increase in spending on space exploration against competing needs such as healthcare; how space exploration could help meet the needs of an expanding population; and the value of international collaboration, as well as the potential for conflict. Meanwhile, those looking at health policy considered how to implement a campaign that would respect people’s autonomy; the potential negative public reaction to a junk food tax; how to leverage celebrity and other partnerships; and the factors that differentiate a political campaign from a PR campaign.

After lunch with their facilitators, the groups made their final preparations before presenting their final advice to ministers. Thanks to their extensive planning beforehand, the students were well-prepared to answer the ministers’ demanding questions on their topics.

The day ended with a talk from Emily Jones, Associate Professor in Public Policy at the Blavatnik School, who encouraged the students to share their own future aspirations with MPP students. One student, who expressed an interest in pursuing a law career, but felt that her dislike of public speaking might hold her back, was able to hear from MPP student José, a trained lawyer who worked in the Human Rights Litigation Unit at Mexico’s Ministry of Foreign Affairs before going to Oxford.

“I am here at Oxford because my mother stood up for my education,” said MPP student Shoaib Rizvi, who was part of the organising team for this year’s event. “With the Policy Slam, I wanted to open our doors to students who see Oxford as out of reach, yet within their community. I hope to create a window of inspiration for these students to come to universities like Oxford and realise their full potential.”

He continued: “To engender hope in young people, it is vital for teachers and community members to create and invest in mentorship opportunities so that these students can succeed in their aspirations.”

Once again, the Policy Slam provided an excellent opportunity for the MPP students to engage with the wider Oxford community, reflecting their commitment to public service and encompassing the ethos of the Blavatnik School.