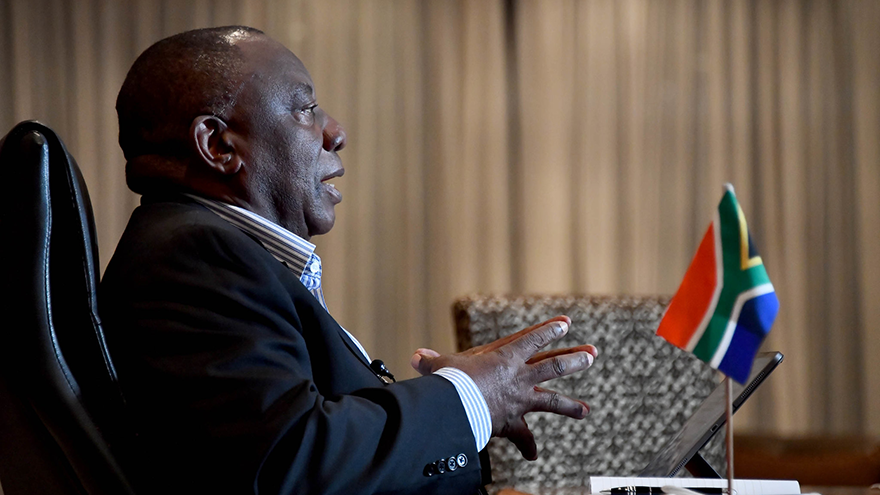 South Africa is at a crossroads. It is a phrase that has so often been used to describe the myriad of challenges the country has faced over the years: the struggles against apartheid, the dawn of democracy or the scandal-ridden decade under former president Jacob Zuma. Through much of these episodes, South Africa has always been able to walk back from the brink – a testament to the country’s spirit of resistance and resilience. But with over half a million confirmed COVID-19 cases – accounting for over half of reported cases on the continent – South Africa again finds itself at a crossroads.

In addition to the devastating health
impact, it is widely expected that the economic fallout from COVID-19
will be devastating for the country. The South African government has been
walking a tightrope trying to protect an overstretched and underfunded health
system, while also trying to rescue a stagnant economy devastated by a decade
of looting and state hallowing under Zuma. But with infections rapidly increasing
and a 30% unemployment rate – with
estimates showing close to 3 million COVID-19 related job losses – the
country faces an unprecedented health and economic crisis.


According to the health minister, Dr Zweli Mkhize, despite the rapid increase in the rate of infection, the country was approaching its COVID-19 peak, as demonstrated by the low fatality rate. South Africa’s fatality rate has been significantly lower than the global average, due in part to its young population. However, shortages of key medical equipment, such as oxygen, hospital beds and PPE, have put enormous strain on the health system and constrained the government’s ability to respond effectively to the crisis.


South Africa had what was widely regarded as one of the most effective responses at the start of the pandemic. The government acted swiftly to contain the initial spread of the pandemic by imposing one of the strictest lockdowns in the world. The lockdown bought the country’s health system adequate time to prepare. However, a slew of “irrational regulations” and rampant corruption dented trust in the government’s ability to control the spread of the virus. As Dr Anna Petherick, Departmental Lecturer in Public Policy at the Blavatnik School and a member of the Oxford COVID-19 Government Response Tracker’s (OxCGRT) research team, observes, “South Africa responded quickly in some aspects and not in others.”


In episode 7 of A Look at the Issues – a public policy podcast produced by the Blavatnik School’s Master of Public Policy (MPP) students – I explored what went wrong in a country that almost got it right. I am joined on this episode by Dr Kerrigan McCarthy from the National Institute for Communicable Diseases, who discusses the science-based approach that informed the initial public health response to the pandemic. She also talks about how the country was able to draw on previous experience with public health campaigns, especially with HIV/AIDS and tuberculosis, to conduct widespread community testing and contact tracing efforts. Also featured in this episode is Dr Miriam Altman, convenor of the COVID-19 Economic Ideas Group and Professor of 4IR Practice at the University of Johannesburg, who talks through the economic impact of COVID-19. Later on in the episode, Dr Petherick discusses why the Blavatnik School chose South Africa as a case study in this year’s Policy Challenge II module, which sees MPP students undertake negotiations and policymaking simulations on real-life policy issues.


Suta Kavari (MPP 2019) is currently studying for a Master of Public Policy at the Blavatnik School of Government. He is the host of the student-led podcast A Look at the Issues.

A Look at the Issues, the new student-led podcast from MPP students, is hosted by Suta Kavari, researched and edited by Jasmina Bidé and Shevika Mishra. It is produced by Anthony Liveris and project managed by Desma Natome, with support from Blavatnik School staff.