Four lessons on how to run a policy commission 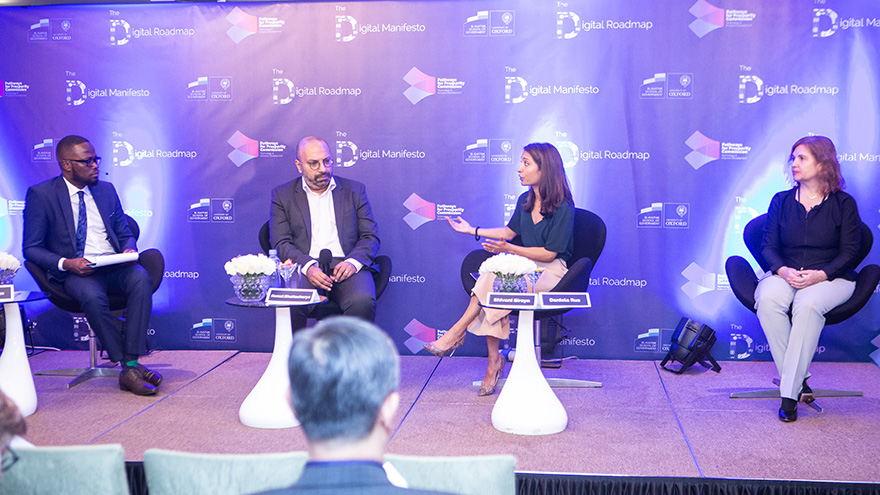 I’ve just finished running a global commission based
here at the Blavatnik School of Government: Pathways for Prosperity, co-chaired
by – among others – Melinda Gates. It was set up to challenge the narrative
that in developing countries, technology necessarily equals catastrophic job
losses and widening inequalities, and to explore the opportunities that it
might offer those economies instead.

Global commissions are fairly commonly used tools in the
policy reform toolkit (as well as their variants such as the Centre for Global
Development’s working group)
so I’d like to reflect on lessons learned, not least because we’ve been
successful. Our reports were widely picked up in the media (globally e.g. Financial
Times, Le Monde, CNN
as well as numerous national publications, broadcast and blogs). Our analysis
has been used by the Africa Union and the UK’s Department for International
Development (DFID) in their respective digital strategies; our methods and
framing have been taken up by the UN Economic Commission for Africa (UNECA) and
the World Bank; and our analysis has been welcomed by governments from Botswana
to Malawi and from Indonesia to Colombia. And we did reset the terms of the
debate: at Smart Africa, arguably the continent’s most politically important annual
technology event, the discourse has shifted from doom and gloom, to a
discussion of opportunity, with our work frequently cited as the reason.


Most importantly, we supported countries to move in the
direction of positive policy reform. In South Africa, following our partnership
with local organisation and with support from the highest levels of government,
there is now a target in place to create half a million new jobs in the
business processing outsourcing (BPO) sector. One in five of these jobs will be
targeted at excluded young people, and the plan has been adopted by the South
African Department of Trade and Industry (DTI). This is part of a wider analysis and scoping of
the opportunities of digital for the country which we supported.


So what made this commission successful?


First, carefully
consider your commissioners and how you work with them. We deliberately
invited some unusual suspects to the table: Shivani Siroya, for
instance, was a first-timer. Commissions tend to be stacked with the same faces
but fresh perspectives deliver invaluable insights and may be more willing to
engage more substantially and more frequently (in the case of Shivani, she
shared some of her company’s previously unreleased data with our research
team).


We quickly realised that engagement peaks – and in reality may
only ever happen – when the work coincides with a commissioner’s own agenda.
Sri Mulyani Indrawati, the finance minister of Indonesia and our co-chair,
played a pivotal role in the launch of our two earliest reports because she was
hosting the IMF/World Bank annual meetings where they were released, in Bali in
October 2018. We learned to pick our moment to make a call on their time.


I thought of the commissioners as a crack-shot advisory
committee. Their inputs were invaluable in shaping the strategic direction of
the research. But that decided, we knew as a secretariat (including the
academic co-directors based here at the School) what we wanted to say. This
meant that we didn’t write by committee, but instead wrote and used commissioners’
inputs to refine and improve. That said they felt, I hope, that consultations
were genuine.


Second, make your
offer compelling and relevant to policy makers. Commissions can take many different
forms – from trying to inform a specific policy to blue-sky thinking on new
intellectual areas. A big part of running one is quickly recognising what form
it should take to best respond to the task. We realised – although this took a
little time – that we needed new intellectual framing and new ideas, but the
commissioners advised that implementation in-country would also be vital. This
prompted us to turn our analysis into a policy tool
which was a game-changer in terms of impact, and meant that our thinking was
based in part on real-world experience.


We were very clear on what policy makers needed. We translated
our papers into readily absorbed policy briefs in plain language; we offered
principles rather than policy prescriptions; and in our country pilots, we partnered
to deliver domestic priorities rather than try to impose our own. We didn’t ask
for anything in return (no multi-person donor visits, or logframe-driven reporting
requirements) other than a little political capital from the government. This,
as well as the trust engendered by the commissioners’ calling cards, was why
were we invited in by president’s offices (in the case of Benin, South Africa
and Ethiopia) and the prime minister himself (Mongolia), and why our work was
taken seriously more widely.


We were highly ambitious, but at the same time didn’t try to
cover too much. In two years, we produced five major reports, three country
projects, workshops and events around the world, as well as running
commissioners’ meetings. This was a lot. Initially we had too few staff, and
were overly reliant on consultants who produced excellent work but frequently
increased transaction costs because, understandably, they had no
appreciation of the internal politics and preferences of commissioners.
We later scaled up the office.


But we didn’t try to be everything to everyone. We
consciously didn’t consider environmental or sustainability issues in our work;
we didn’t discuss the intersection with fragility; and we didn’t attempt
systematic widescale multi-country consultation. Instead we were opportunistic
about our outreach – asking everyone we met on the way.


Third,  have a clear pathway to impact. We found
media interest in our work peaked when the commission was announced and then at
the time of a first success – and for some audiences this would be the only
time to get cut-through with a message. We quickly figured we couldn’t wait
until the end to make a big impression. Our final report
is a useful summary of our accumulated knowledge, but in reality we had much
more impact with our Charting
Pathways report, launched in the first year. Incidentally, we also had an
early failure, which served to focus minds: just a couple of months after
launch we met with commissioners who rightly slapped down our research plans
because we hadn’t taken the time to get their buy-in.


Finally, pay serious attention to what’s next. We thought about legacy from the outset, determined to not be a flash in the pan. I spent as much of my time thinking about, working on and fundraising for the future of the initiative as delivering it. I’m very happy to say that has come to fruition in the shape of Digital Pathways at Oxford, which will now focus on the biggest gap we identified in our two years of engagement – the challenges of governing digital technology. This means the Commission’s success has a chance of being a lasting one.


Elizabeth Stuart is the Executive Director of the Blavatnik School's Digital Pathways at Oxford, which continues the work carried out by the Pathways for Prosperity Commission on Technology and Inclusive Development.