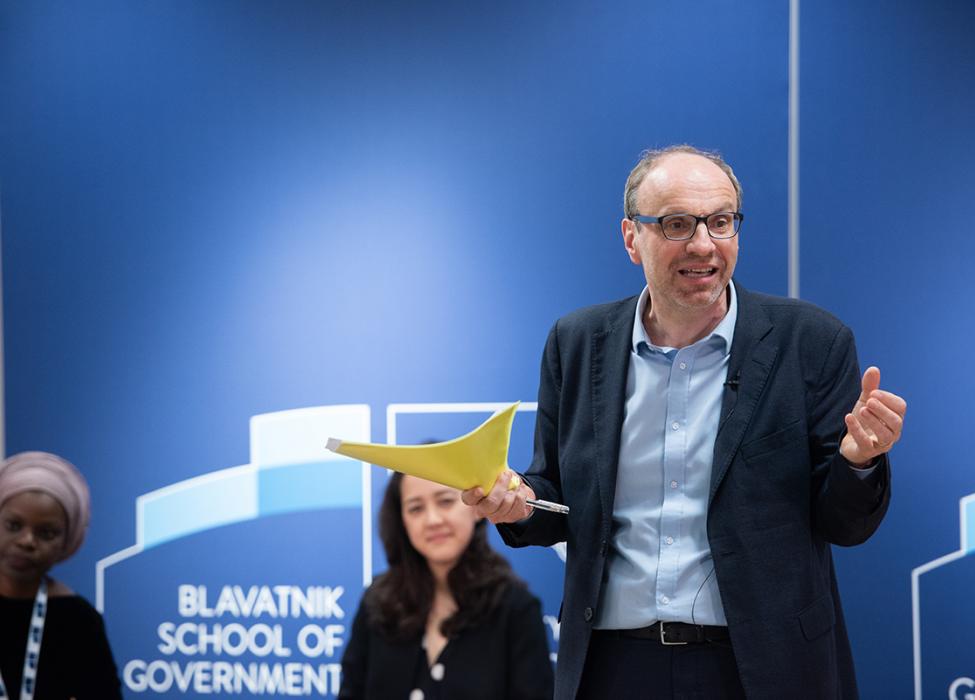 Despite facing outrage from many Conservative MPs and strong criticism from three former Tory prime ministers, last week the UK government won the vote to back a reduction in foreign aid from 0.7% to 0.5% of gross national income.

The UK’s aid budget had already suffered significant cuts over the past year: soon after merging the Foreign and Commonwealth Office (the foreign ministry) and the Department for International Development (DFID, responsible for administering overseas aid), Foreign Secretary Dominic Raab announced a £2.9bn package of cuts.

In September 2020 Stefan Dercon, Professor of Economic Policy at the Blavatnik School, was appointed Policy Advisor to the Foreign, Commonwealth and Development Office (FCDO), the UK government department tasked with foreign affairs and overseas aid. A former DFID chief economist, Stefan now advises the Foreign Secretary directly on all aid spending and international development policy – alongside his commitments within the Blavatnik School and University of Oxford.

When we interviewed him for our most recent annual report, Stefan shared his thoughts on the complexities of working at the intersection of development and foreign policy.

What do you make of the decision to merge the two departments?

It was obviously a political decision, and both the Foreign Secretary and the Prime Minister have given official statements on this. My job is to make sure that DFID’s expertise on international development is not lost, and to work on the upsides of this merger, making the most of the opportunities offered by a more integrated foreign and development policy. Take climate change, for example: in the past, the government would spend on programmes that reduce emissions or help countries to adapt; now it is also able to use such programmes as part of negotiations, encouraging collective action. Similarly, on issues of food insecurity and the risks of famine in settings like Yemen or Ethiopia, we have the chance to better integrate humanitarian relief with the diplomatic work on humanitarian access and the protection of vulnerable people in conflict. Having your ambassador in Berlin contributing to fundraising for a crisis, or the ambassador in Dubai focused on how some countries may be influenced to give better humanitarian access in Ethiopia, can only be a positive step. And so is a Foreign Secretary meeting with his G7 colleagues and able to discuss girls’ education or famine risk in the developing world.

In the face of cuts to the aid budget, how do you go about advising on spending priorities?

It is clear that £4.5bn in cuts is brutal. However, the remaining £10bn is a substantial amount. The Foreign Secretary and the Prime Minister set the areas of priority – climate change, global health, food security and girls’ education. My advice focuses on how to spend most effectively within these categories using cost-benefit analysis and exploring where the marginal return is highest. But development spending is a multi-year activity and a country is often locked in with various spending commitments, some legally or politically stronger – for example with GAVI, the global vaccine alliance, the World Bank, or WHO. The constraints were many, and very hard trade-offs had to be made.

In principle, I try to focus on neither. I prefer to focus on programmes that have impact. Spending just because there is need leads to poor spending, as it assumes that spending money on a problem will solve it. Spending on short-term transactional interests does not help anyone either: tied aid (where we spend in order to support UK firms) has been shown to be highly ineffective, while expecting quick quid pro-quos overstates the size and role of aid even in poorer developing countries. Having said this, the UK is driven by giving to places where need is high – more than 50% of the UK’s bilateral aid goes to sub-Saharan Africa, and this has not at all changed. Furthermore, there has long been a relative bias towards certain countries – but this is not simply due to geopolitical or economic interest. The fact that the UK gives more to Commonwealth countries, or to East Africa and the Horn, is linked to the longstanding relationships it has with these countries. Aid is best spent as part of long-term partnerships – it is, then, no surprise that this apparent bias exists.