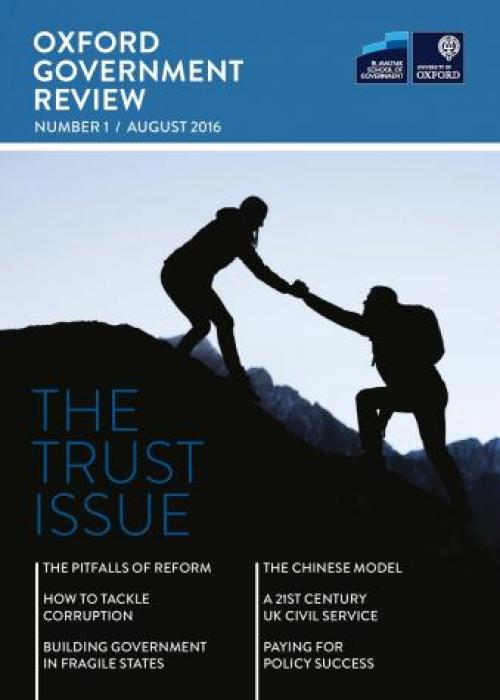 "In 2016, governments are in the firing line. Their populations suspect them of accelerating globalisation for the benefit of the few, letting trade drive away jobs, and encouraging immigration so as to provide cheaper labour and to fill skills-gaps without having to invest in training. As a result the ‘anti-government’, ‘anti-expert’, ‘anti-immigration’ movements are rapidly gathering support. The Brexit campaign in the United Kingdom, the Presidential run of Donald Trump in the United States, and the Five Star movement in Italy are but three examples."  – Professor Ngaire Woods, dean of the Blavatnik School of Government

The first issue of the annual Oxford Government Review focuses on trust – or lack of trust – in government. Our contributors shed an innovative light on this issue. McKinsey’s Andrew Grant and Bjarne Corydon discuss the importance of transparency and accountability of government, while Elizabeth Linos, from the Behavioural Insights Team in North America, and Princeton’s Eldar Shafir discuss how behavioural science can be utilised to implement better policy, and Geoff Mulgan, CEO at Nesta, provides insights into how harnessing technology can bring about increased collective intelligence.