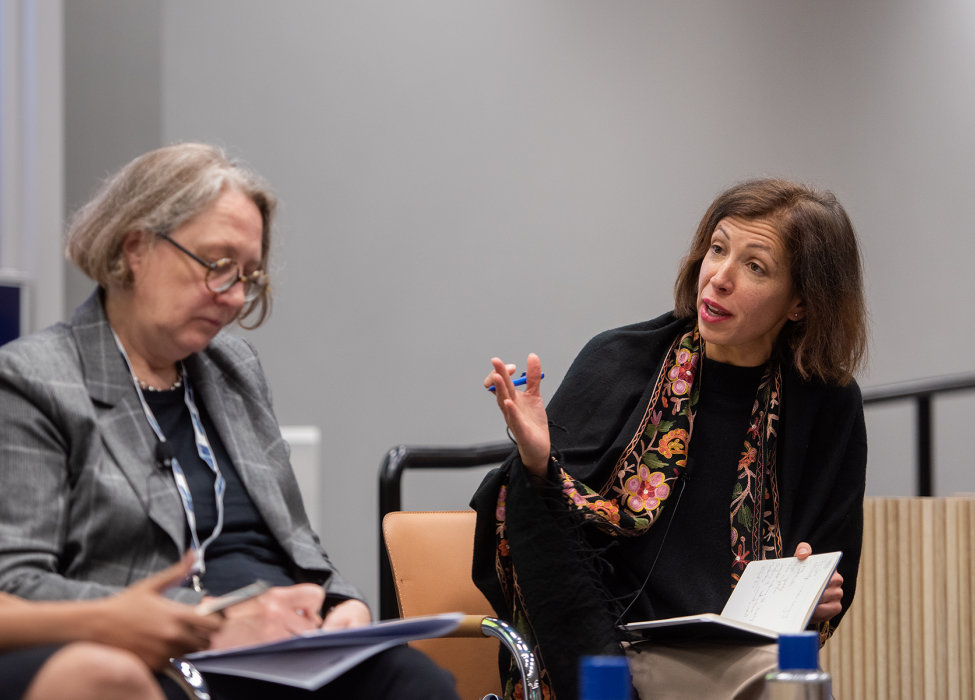 Dr Maya Tudor is Associate Professor of Government and Public Policy at the Blavatnik School of Government. Her research focuses on the origins of stable, democratic and effective states across the developing world, with a particular emphasis on South Asia. Recently, she has been examining questions of nationalism and its relationship to inclusive democracy.

“There’s a strong case to be made that nationalism is the most powerful political ideology in the world today. We’re currently seeing micro-identity politics becoming more important, especially to young people, but nationalism and religion are the only two ideologies that can scale up all across the world.”

Nationalism is a particularly important set of ideas because popular ideas of who constitutes the nation legitimate the use of state power. “In key moments of national policy change, such as when states wage war, jail large groups of people, or create national health services, the governments taking these actions almost always harness the power of nationalism to do so.” For example, the social solidarity that emerged in post-World War II Britain as a result of the war effort was used to power the creation of the National Health Service. “In this case, nationalism led to the creation of a tremendous public good.”

A wide body of research asks what a nation is and where nationalism comes from, but there has been little research into nationalism’s effects. “There is a presumption on the part of many politicians and academics that nationalism is intrinsically bad and, partly because of a strong emotional legacy from World War II, it has been assumed that it is not worth researching in terms of its effects. My research is pushing back on that, building a case that nationalism is a resource that is not fundamentally good or bad.”

Recent history demonstrates how nationalism can deliver opposing outcomes: “It’s often forgotten that, at the same time as democracies in Europe were being destroyed in the name of nationalism, democracies in various other parts of the world – such as India, Indonesia and across Sub-Saharan Africa – were being created in the name of a new nation. This raises an important research question that I’m looking into in my next book: under what conditions is nationalism a resource that helps build democracy, and under what conditions does it help undermine or destroy democracy?”

“My hypothesis is that where you have narratives of a nation built on race, religion or ethnicity, democracies are structurally less stable. When national narratives make any of these categories central to citizenship, you create second-class citizens. During crises, it’s easier for politicians to point the finger at these second-class citizens. This can lead to democratic breakdown, as substantial portions of the population have their civil liberties quashed. Over time, as societies become polarised, members of favoured groups who defend the rights of second-class citizens can be targeted too.”

The changing national narrative in India provides a case study to support this hypothesis. “During the decade before and after independence – a critical time period where the nation was envisioned and settled institutionally – India had a highly inclusive vision of the nation. In 2014, you had a Prime Minister come to power based on two major messages: economic development and Hindu nationalism. Based on research I’ve looked at, the most important driving factor of about half of the Modi vote in 2014 was his focus on being an effective manager of economic development. As economic growth failed to materialise in Modi’s first term, he has increasingly emphasised a narrative of the Indian nation that is based on Hinduism.”

“What we are now seeing is minorities who are not part of the core groups being systematically deprived of their rights. Just last week, India’s capital witnessed its worst violence since a Prime Minister was assassinated in 1984, and possibly since independence in 1947. Of course, nationalism isn’t the only force driving political outcomes such as elections.”

“In India during the last 20 years, intergenerational mobility among scheduled castes and scheduled tribes [the official designation of historically disadvantaged castes and tribes] has risen, but this is not true of Muslims. That pattern probably predates Modi, but Modi’s elevation of Hindu nationalist rhetoric is almost certainly intensifying it.”

While many populist politicians embrace nationalism, other sections of society are vocal in their rejection of it. “The human rights community is one group that has pushed back against the legitimacy of any kind of nationalism. But the reality is that many of the most important policy decisions of our generation – for example, on inequality and climate change – will be tackled by national governments adopting national policies. Given that governments have every incentive to use nationalism to legitimate their policies, the potential of nationalism to influence policy change on a global scale is significant.”

For those seeking to promote progressive causes, nationalism may be an untapped resource: “Think about how change came about on issues such as civil rights and women’s voting rights in the US: these key social movements effectively used the rubric of inclusive national ideals to expand the ambit of citizen’s rights. It’s a mistake to leave nationalism on the table for the forces of nativism; it can be just as compatible with the forces of progressivism if you are willing to fight that battle.”