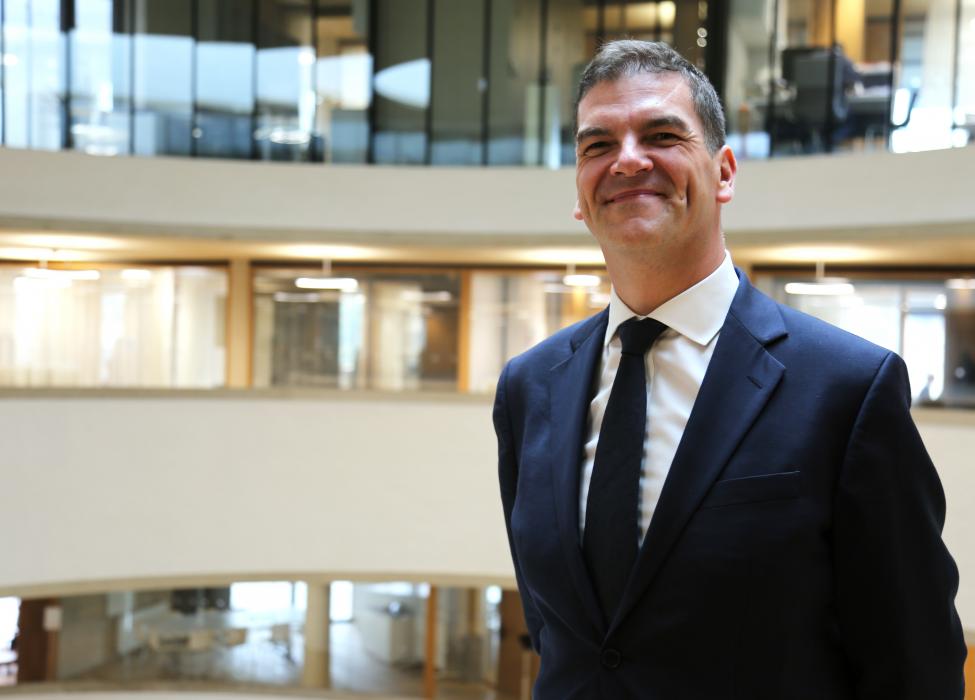 Oliver Robbins, until recently the UK’s Chief Negotiator for Exiting the European Union, is to become the inaugural Heywood Fellow at the Blavatnik School of Government.

The purpose of the new visiting fellowship, created in memory of Jeremy Heywood, Cabinet Secretary from 2012 to 2018, is to give a UK Civil Service Permanent Secretary the opportunity to explore issues relating to public service and policy outside of the immediate responsibilities of government duties.

The Heywood Foundation and the Blavatnik School, University of Oxford, have established the Heywood Visiting Fellowship with support from the Cabinet Office. The Fellow will be associated with Hertford College, Lord Heywood’s former college.

Professor Ngaire Woods, Dean of the Blavatnik School, said: “Lord Heywood was an inspiration to many public servants, not just in the UK but around the world. He upheld the values of an impartial, independent civil service while relentlessly seeking innovative ways to improve its service to citizens and governments. We are proud to be working with the Heywood Foundation to sustain his legacy through the creation of the Heywood Fellows. We look forward to welcoming Olly Robbins as the first Fellow.”

Olly Robbins said: “Jeremy, with his pride in the Civil Service and its values, remains an incredible inspiration to me and many other civil servants. It is an enormous privilege to be given the opportunity to reflect on some of the challenges the Civil Service faces, as the first Heywood Fellow.”

Suzanne Heywood, Chair of the Heywood Foundation, said: “On behalf of my fellow trustees I would like to congratulate Olly on this fellowship, which was created to continue the passion that Jeremy Heywood had for policy innovation and diversity. We are delighted that Olly will be our first fellow and I know that Jeremy would have felt the same way.”

Jeremy Heywood – Lord Heywood of Whitehall – served as Cabinet Secretary from January 2012 to October 2018. He was also Head of the Civil Service from September 2014. Jeremy Heywood had previously served three Prime Ministers in 10 Downing Street as Principal Private Secretary to Tony Blair (1998–2003) and Permanent Secretary in Number 10 to Gordon Brown (2008–10) and to David Cameron (2010–12). In previous roles in the Civil Service, Jeremy Heywood served as Principal Private Secretary to successive Chancellors of the Exchequer, Norman Lamont (1991–3) and Kenneth Clarke (1993–4). Jeremy Heywood was committed to innovation in public service and to broadening the civil service so that its diversity more fully represented the citizens it serves. These priorities lie at the heart of the work of the Heywood Foundation which was established in his memory.

Oliver Robbins joined the Civil Service in 1996. He spent the first ten years of his career at HM Treasury and was then Principal Private Secretary to both Tony Blair and Gordon Brown, Deputy National Security Advisor to David Cameron, and Second Permanent Secretary at the Home Office. In July 2016, Mr Cameron appointed him the Permanent Secretary responsible for coordinating HM Government’s approach to withdrawing from the European Union. After Theresa May became Prime Minister, Olly set up and led the Department for Exiting the European Union, while continuing to act as the Prime Minister’s EU Sherpa, and the senior official responsible for coordinating both advice on EU exit and negotiations with the EU. From October 2017, he moved back to the Cabinet Office as these coordinating functions were brought directly under the Prime Minister. He was appointed Companion of the Order of the Bath in The Queen’s Birthday Honours, 2015. He was made a Knight Commander in the Order of St Michael and St George in 2019 for public service.