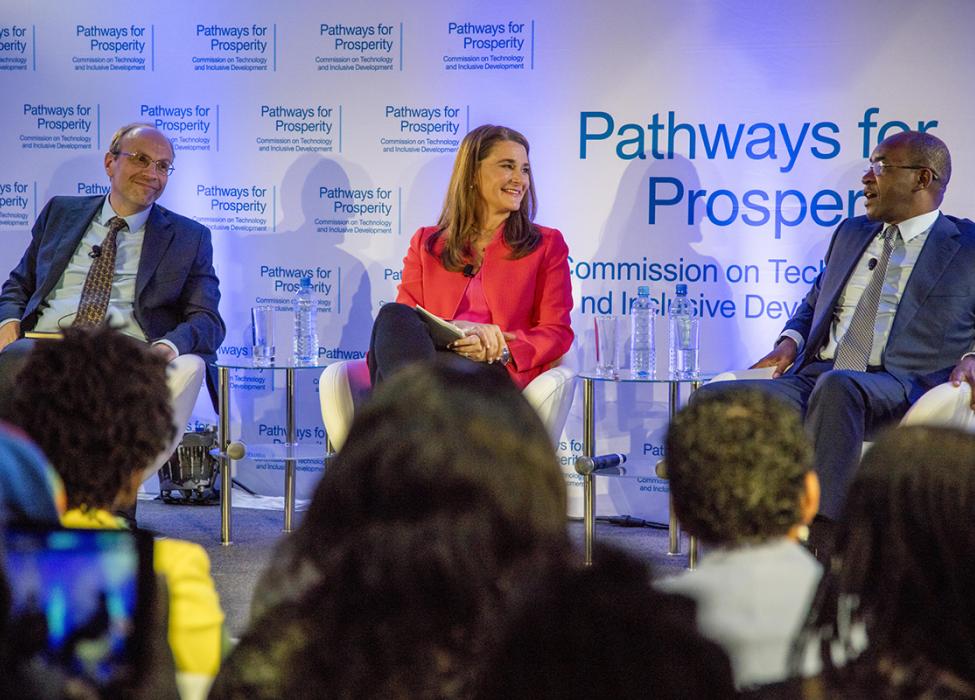 The Blavatnik School of Government is delighted to announce the launch of Pathways for Prosperity: Commission for Technology and Inclusive Development, a new initiative that will explore the impact of frontier technologies such as automation, artificial intelligence, 3D printing, energy generation and storage, and biotechnology on developing countries.

The commission, founded and led by the Blavatnik School of Government, and funded by the Bill & Melinda Gates Foundation, brings together a diverse range of leaders from government, business and academia to provide evidence and analysis, as well as concrete policy recommendations, to help developing countries’ governments navigate this rapidly evolving landscape.

The Pathways for Prosperity commission will be led by three co-chairs; Melinda Gates, co-chair of the Bill & Melinda Gates Foundation; Minister Sri Mulyani Indrawati, minister of finance in Indonesia; and Strive Masiyiwa, founder and executive chairman of the telecommunications company Econet.

‘The world has made incredible progress over the past 25 years, with the number of people living in extreme poverty being halved to about 800 million. Whether this positive trend continues depends in large part on how we respond to the new forces shaping our world, specifically rapid technological change’ said Blavatnik School’s Stefan Dercon, one of two academic directors with Benno Ndulu, former governor of the Central Bank of Tanzania.

Today's launch takes place in Nairobi, Kenya and coincides with the World Economic Forum in Davos, Switzerland, where global leaders are gathered to discuss the importance of creating a ‘shared future in a fractured world.’ The commission emphasises the need for the global conversation to include the role of technology in driving progress and inclusion in developing countries.

‘Innovation can help people transform their lives, but only if they have access to it,’ said Melinda Gates. ‘This commission brings together diverse thinkers and doers committed to ensuring that everyone, no matter how rich or poor, can take advantage of technological innovation.’

While some technological advancements may disrupt or block traditional routes out of poverty by making certain jobs obsolete, some new technologies could offer an alternative roadmap to inclusive development. For instance, the widespread use of digital financial services in Kenya has enabled 75% of people over 15 years old to have access to bank accounts (up from 10% in 2005), and mobile financial services such as M-Pesa have lifted 2% of the population out of poverty.

Today’s launch, a panel discussion moderated by Larry Madowo, a Kenyan journalist and news anchor, is the first of several events the commission will hold around the world over the next two years.