Consciousness and free will within the modern physical worldview

Humans not only act in the world but consciously experience it, such as the delectable taste of Nutella, the sharp sting of an infected tooth, or the terror and ecstasy of a near-death experience. For this lecture, neuroscientist Dr Christof Koch will discuss progress achieved in locating the footprints of such conscious experiences to the posterior part of the cerebral cortex, the outermost layer of the brain, introducing a general theory of consciousness, Integrated Information Theory.

The theory explains in a principled manner which systems are conscious, based on their architecture, and has been used to build a device to assess the presence of consciousness in patients with disorders of consciousness, such as vegetative state patients. The theory predicts that consciousness is much more widespread than commonly assumed, possibly including most animals. On the other hand, digital computers, though they may behave as intelligent as humans, will not be conscious. Consciousness is ultimately about being, not about doing.

This event will be moderated by Professor Karthik Ramanna.

This event will also be livestreamed on our YouTube channel.

Christof Koch, PhD, is a neuroscientist best known for his studies and writings exploring the basis of consciousness, starting with the molecular biologist Francis Crick more than a quarter of a century ago. Trained as a physicist, Christof was for 27 years a professor of biology and engineering at the California Institute of Technology. In 2011, he joined the Allen Institute for Brain Science in Seattle as their Chief Scientist, becoming the President in 2015. He is now the Chief Scientist of the MindScope Program at the Allen Institute, operating brain observatories to map, analyse and understand the mammalian brain. He is also the Chief Scientist of the Tiny Blue Dot Foundation, which focuses on understanding consciousness, its place in nature, and how this knowledge can benefit humanity. Dr Koch is a frequent public speaker, author of four books, and a vegetarian who lives on a small island in the Pacific Northwest and who loves big dogs, rowing, climbing, running, and biking. 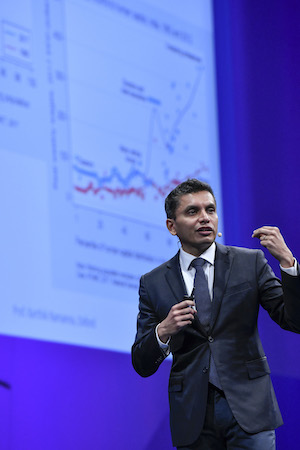