The Xinjiang Production and Construction Corps: an Insider’s Perspective 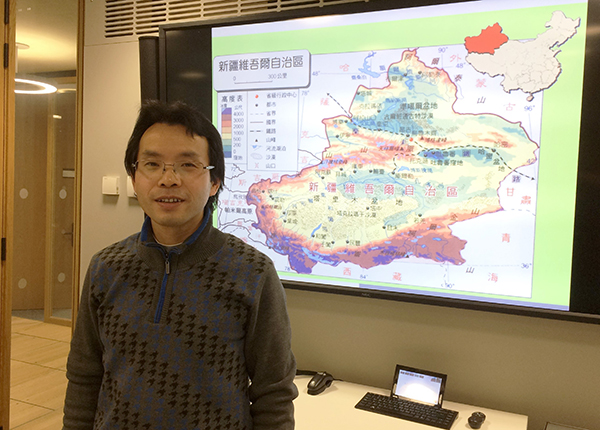 RD: Yajun, in your paper you say that the Xinjiang Production and Construction Corps (XPCC) has been described as one of the most secretive organisations in China. What made this organisation the focus of your research?

YB: In 2008, I was sent by the Central Organization Department of the Chinese Communist Party (CCP) to work as a member of the XPCC for one year, to study the governance and management system of the organisation, aspects of which were poorly understood, even within the XPCC. My book on the XPCC was published in 2010, and I have continued to study it ever since.

RD: What are the roles and functions of the XPCC?

YB: The XPCC was established in 1954 to settle, develop, and protect the north-western border region of China, the Xinjiang Uyghur Autonomous Region (XUAR). This region covers one sixth of the area of China, but contains less than 2% of its population. The first XPCC members were mainly decommissioned soldiers, who were soon joined by many young people, professionals, and peasant farmers from all over China. The intention was to ensure a permanent population of Han Chinese in this ethnically diverse region. The XPCC is presently responsible for almost 12% of the population of Xinjiang. It still has the dual roles of ensuring stability and fostering development.

RD: The early years of the XPCC sound very hard.

YB: Yes, the Chinese government’s policy was to avoid competition with the local population for land, so the XPCC’s regimental farms were established in remote barren regions. The land had to be reclaimed from bare desert and cultivated through back-breaking manual labour. There was virtually no mechanisation or even animal-power for ploughing the land. Nonetheless, the XPCC developed efficient agricultural production methods and became a model for China’s modernisation. In the 1950s and 60s people joined the XPCC in large numbers, proud of being part of this patriotic and successful enterprise.

YB: The XPCC has been described as a ‘strange’ organization. It has a military structure, but is also a hybrid of state-owned enterprise and bureaucracy. The headquarters, based in the capital of Xinjiang, Urumqi, is responsible for 14 divisions, which in turn are responsible for a total of 176 regiments, themselves divided into companies. About 60% of XPCC’s 2.8 million members are associated with the regimental farms, the rest work in industrial enterprises or in the public sector. The XPCC organizes its own administration and judicial systems, and is responsible for the public services and welfare of its members. Nevertheless, it is still nominally under the authority of the regional government of XUAR, although its economic affairs are directed from Beijing.

RD: What difficulties does the XPCC face?

YB: The XPCC’s problems are twofold. It has severe financial difficulties, and relationships between XPCC and the government and population of XUAR are often tense or aloof.

XPCC is in economic difficulties because few of its farms and industries are profitable and it must support huge numbers of retirees. It survives only through massive central government subsidies. It would like to establish more cities with tax-raising powers, but permission is rarely given by the regional government. Overall, although nominally cooperating, XPCC and XUAR often clash over competition for assets and resources such as water.

Xinjiang is beset with ethnic tensions, mainly between the Uyghur people (Xinjiang’s largest minority) and the Han Chinese. XPCC’s role in maintaining stability is mainly in response to emergencies rather than having a proactive role fostering ethnic harmony. XPCC’s quasi-military role is still significant, with perhaps 100,000 personnel undertaking militia training alongside their other day-to-day activities.

RD: What do you see as the future of XPCC?

YB: Two points are important. First, Xinjiang is central to China’s development, especially as China opens up overland routes to the west as part of the Belt and Road initiative. One of the main rail freight routes passes through Xinjiang. Second, the Beijing government sees XPCC as central to the governance of Xinjiang. President Xi reemphasised its roles of security, integration, and development on a visit to Xinjiang in 2014, when he said that XPCC should become ‘a stabiliser of frontier security and stability’, ‘a melting pot of all ethnic groups’, and ‘a demonstration zone for advanced productive forces and cultures.’

Accordingly, XPCC’s recent reforms have taken the following paths. It has intensified its militia training, which for some time previously had been declining. At the same time, it tries to improve relationships with the local communities, for instance by opening up its industries and enterprises to non-XPCC employees. It is looking to improve its economic position by trying to reduce its overwhelming dependence on agriculture and move towards more high-tech industries and urbanisation. It is also trying to improve the efficiency of its agricultural production, and has plans to expand into the poorer southern area of Xinjiang.

In my view, however, these reforms are incremental improvements on ‘business as usual’ and do not represent effective reforms. XPCC remains largely isolated from the local populations and has to do more to gain their trust and respect.

While it is not realistic to expect XPCC to suddenly and completely shift its focus and role, I suggest there are some practical ways in which it could promote good governance in Xinjiang. First, XPCC could provide more education and healthcare services for local residents. In Xinjiang, basic public services are in very short supply and their provision should start to reduce ethnic tensions. More Uyghur-speaking professionals such as teachers, doctors, and nurses would not only benefit the minorities but could also win their respect. Second, urbanisation should be planned to promote integration. In my view, building new XPCC cities is not the way forward. Instead, integrating XPCC districts in existing XUAR cities is a much more promising initiative. Tianbei New District, a joint initiative of XPCC and the city of Kuitun, provides an example of such cooperation.

RD: Are you optimistic about the future of Xinjiang?

YB: I am cautiously optimistic about its future. However, we must recognise the deep-seated roots of separatist extremism in Xinjiang, which has suffered the most violent ethnic unrest in all of China over the past decade. This instability has many causes, including the rise of global terrorism. Both central and local government realize that this problem will not be solved in the near future solely through economic development and better public services, and they emphasise the need for continued anti-terrorism measures. For example, the current general secretary of the XUAR committee of the CCP, Chen Quanguo, said that all levels of authorities had to recognize that the security situation in Xinjiang is extremely serious, and deterrence and control measures will be required for years to come. Nevertheless, I believe that as the CCP is committed to improving governance through enhanced capability and capacity, the implementation of modern governance techniques will eventually bear fruit.

Dr Bao’s paper in which he discusses these themes more fully is available here.

Dr Yajun Bao is a Research Fellow at the Development Research Center of the State Council in Beijing, China, and was a Visiting Researcher 2017-2018 at the Blavatnik School of Government as part of the DRC Partnership.

Dr Ruth Dixon is a Research Fellow at the Blavatnik School of Government.
Development Public sector