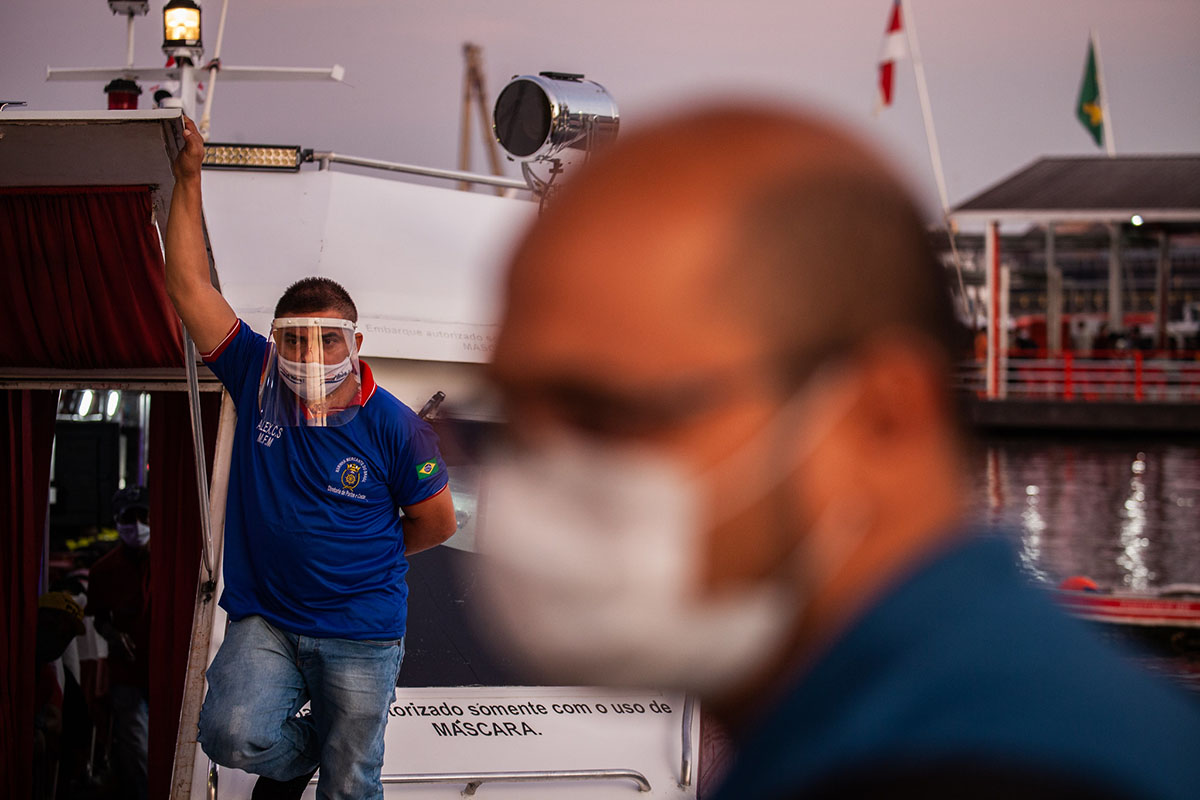 A passenger waits the time of the departure of a speedboat during the early hours of the morning in Manaus, Amazonas, Brazil, on September 19, 2020. IMF / Raphael Alves

Since July 2020, over 150 Brazilian coders have faced political instability, precarious employment, infrastructure adversities, and grief to build a public good to help their country in the fight against COVID-19.

These persevering volunteer coders from all regions of Brazil have committed to systematically code the strength of subnational policies using ordinal scales in 16 policy domains. As the first Oxford COVID-19 Government Response Tracker’s subnational project, they adapted a coding system based on internationally dominant tendencies. They have actively searched for reliable sources in the midst of an official information blackout. And, of course, all the while recording their findings in the tracker database in a non-native language. The outcome of their efforts is a robust dataset, freely available and updated in real-time, covering 81 jurisdictions: the 26 states, the federal district, and 53 cities – the 26 state capitals and most populous non-capital cities of each state. 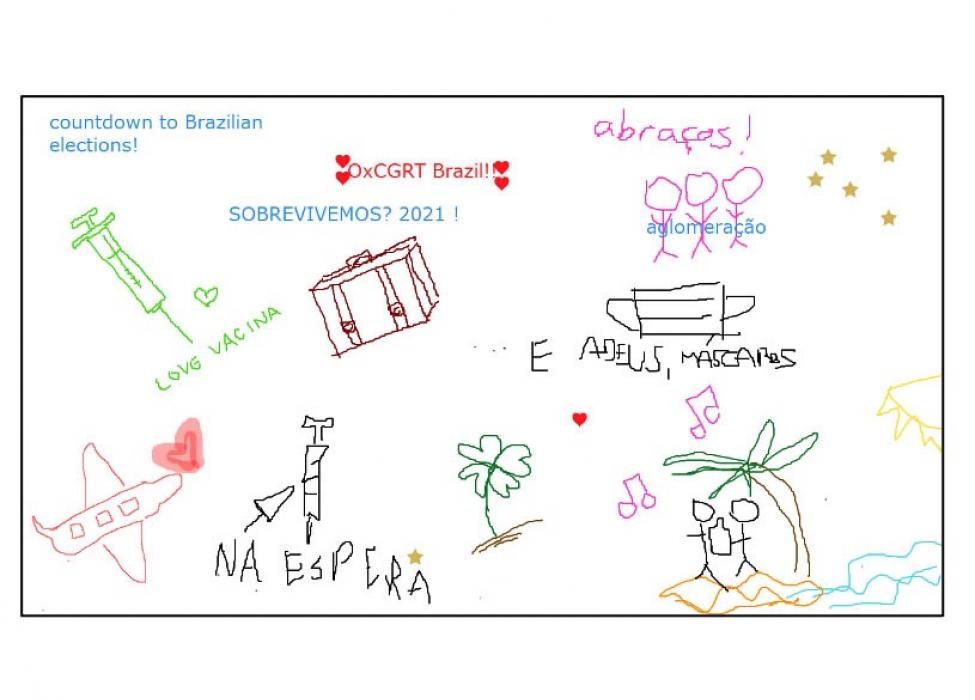 Brazil team’s collective drawing made on Zoom’s white board during 2020’s year-end coding meeting. It translates "love vaccine", "waiting [for the vaccine]", "goodbye, masks", "hugs/agglomeration", "did we survive? 2021!"

The Brazilian subnational coders have had to be creative. Initially in 2020, many sub-national Brazilian governments created web pages to provide information about the pandemic, including the policies that they had put in place (each of the country’s municipalities and state governments can pass their own decrees to enact or revoke preventative measures). But by the end of that year those efforts had ceased, largely due to confusion among local politicians as to whether providing such information counted as political campaigning using a publicly funded site, which would have been illegal in the run up to municipal elections. In other words, the webpages centralising governments’ COVID-19 response policies were generally no longer updated after September, 2020. Moreover, after the municipal elections in November 2020, governments often failed to, or were slow to, restart updating COVID-19 policies on their sites. The only way to complete the Oxford COVID-19 Government Response Tracker coding, therefore, was to dig deep online, and to come up with innovative strategies and research protocols that circumvented the problem.

It was September 2021 when Felipe da Silva Santos was allocated to code Cruzeiro do Sul, a city in the state of Acre, in the northern (or Amazon) region of the country. He had dedicated his weekend to it, as he usually does, but eventually got stuck in the indicator C2 - closings of workplaces. With no official information being released by the city government, and with the news cycle increasingly moving on from COVID-19, Felipe wasn’t finding a reliable source to enter into the database. Frustrated and about to give up, he came across a news report of a robbery in said city. He quickly scrolled down the page until he saw a photo at the end of the article: it not only showed the commercial establishment that had been robbed but all the other establishments around it as well. They were all open and operating, which meant that no measures requiring the shops to close were in place. He had found his source and could finally update that cell in the COVID-19 Government Response Tracker database.

Even when volunteer coders are able to find recent, official information concerning the tracker indicators, they still need to verify whether the policies created by subnational governments are legal reality. This is especially difficult in Brazil because the courts have generally played an important role in mediating conflicts between different levels of government in deciding which COVID-19 response measures should prevail. In particular, the Brazilian Supreme Court, known as the STF (Supremo Tribunal Federal), has been a key actor in deciding the policies that have taken precedence in legal conflicts around the country (for more information on this point, see this expert panel discussion). During the pandemic, the courts in Brazil have revoked and required the implementation of COVID-19 response policies by all levels governments. So, the coders have had to investigate recent rulings and take them into account when deciding how to accurately code the policies in place.

But the challenges of coding COVID-19 response policies in Brazil have not only been about finding and evaluating the information. Often coders must overcome the non-trivial challenge of translating peculiar Brazilian policies into the ordinal coding system of the Oxford COVID-19 Government Response Tracker, which was initially designed with internationally dominant tendencies in mind. To do so, the Brazil subnational team meets regularly to discuss hard cases and to agree on a joint interpretation that could be replicated in other similar cases, and that makes sense in relation to other subnational projects part of the tracker. These conversations and adaptations happen every day, triggered by new policies as well as the coders’ brilliant insights – the questions from Laura Boeira, the first Brazilian coder of the month, always blow our minds. 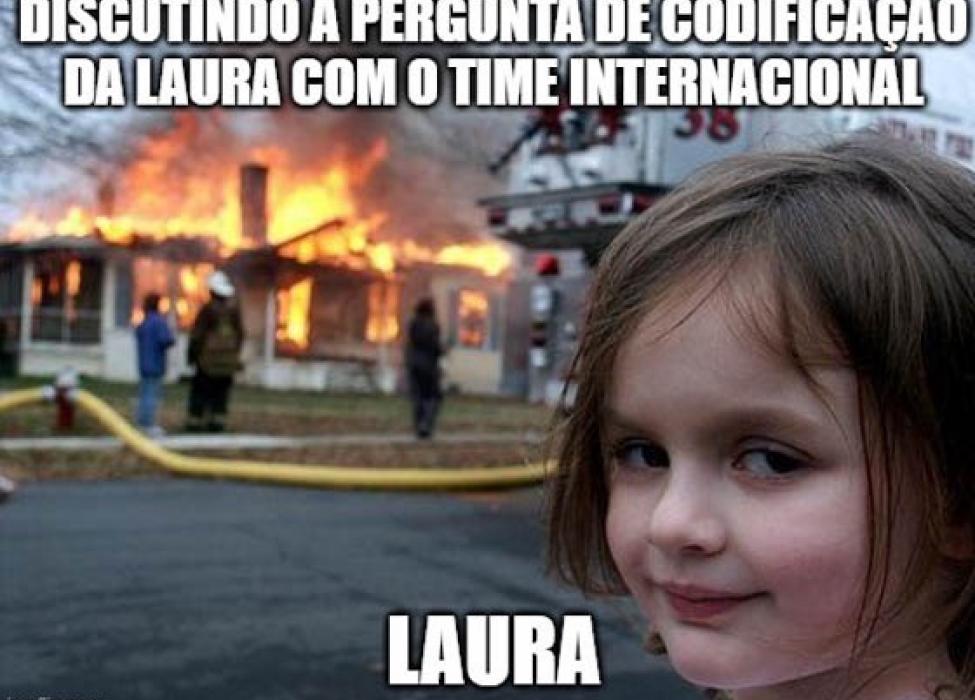 Laura is one of the coders who has been part of the Brazilian collective learning since the early days of the Oxford COVID-19 Government Response Tracker when only states and capitals were being coded, and the members of the team were assigned to different units each week. It soon became clear to the team the importance of ‘long-term relationships’ between coders and their sub-national units. "In Brazil, we often face lack of transparent information, as well as the fact that we are talking about a country with continental dimensions and huge socio-political diversity. The more you know about the way things are done in a certain place, the easier it gets to find the hidden spots where COVID information lies" says Laura. One highlight of the experience? "The incredible level of collaboration among coders who are always willing to share tricks, curiosities, or frustrations with the group". As new codes arose, each and every person from the Brazilian team offered their thoughts and interpretations in an everlasting exercise of sense-making.

The success of the Oxford COVID-19 Government Response Tracker, and the very existence of the project’s working papers and other outputs, should be credited to our amazing volunteers. In Brazilian Portuguese, "gambiarra" means to use improvised objects or methods to solve a problem. Have you ever pushed your back against a wall as a way to scratch it by yourself? Or used a long stick to turn down the lights after you were already in bed so you wouldn’t have to get up? If so, then you have made a gambiarra. And this term can be used to describe the creative way that our team of Brazilian volunteers have found to bypass the obstacles they faced along the way. And in doing so, they have helped to build and keep up-to-date the most comprehensive dataset of COVID-19 government response policies available for any country. The Oxford COVID-19 Government Response Tracker project has recently turned two years old, and this subnational dataset has been running for close to all of that period. We hope this dataset will yield lessons for policymakers long into the future.

Maria Luciano is subnational lead and Julia Sampaio is research assistant for the team Brazil of the Oxford COVID-19 Government Response Tracker. Laura Boeira is Executive director of Veredas Institute.

The Brazil team are very grateful to all the volunteers who have made the coding possible (see this page for a full list of names).