A matter of life and death: a note on the ‘Policing and Pandemics’ webinar 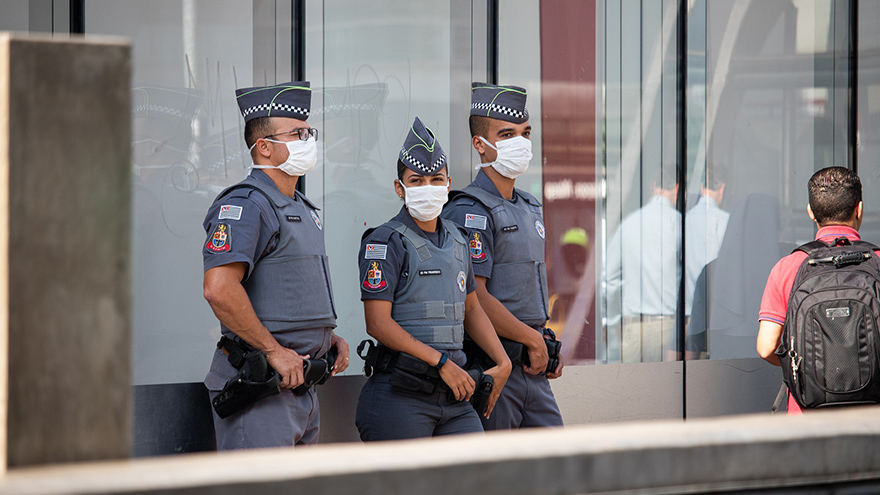 The role of law enforcement during the COVID-19
crisis has come into sharp focus the world over. Last April, the Blavatnik
School of Government organised a webinar for its alumni on policing and
pandemics. Led by Christopher Stone, Professor of Practice of Public Integrity
at the School and international expert on policing and criminal justice reform,
the webinar was attended by more than 40 alumni from around the world.

Police and civilian loss of life


Professor Stone began the webinar with details of
police officers on the frontlines who have lost their lives due to the virus
and the resulting huge cost to police organisations. The risks to police forces
assisting countries in tackling the crisis are huge, making it very complicated
and challenging for leaders to decide how best to utilise police personnel. Acknowledging
the sacrifices of police officers around the world, Professor Stone spoke about
the difficulty of balancing the health risks to police officers, the reduction
in numbers of police caused by the pandemic, and the increased need for police
services.


Tragically, in some countries the forcefulness of
police responses appears to be far greater than justified by the danger
presented by the epidemic or by the failure of some residents to comply with curfews
and lockdowns. Civilian loss of life due to police violence seems to be the
result either of reckless encouragement by commanders and political leaders,
such as in the Philippines, or of undisciplined, poorly supervised deployments
in countries such as Nigeria, Uganda, India, and South Africa.


While these extreme incidents have been
attracting attention, Professor Stone highlighted that they are but a tiny
fraction of overall police-civilian interactions around the world during the
pandemic. The ubiquitous nature of these lockdowns means that there are millions
of police-civilian interactions around the world. As the crisis progresses, it
is important for governments to account for how they have trained and instructed
police forces to interact with civilians.


The role of training and preparation


Governments everywhere have known a global
pandemic was inevitable and have planned for a moment like this for at least a
decade. Concepts like ‘social distancing’ are not new to police leaders in many
countries, even if constables and front-line police officers were likely
hearing them for the first time, much like many of us. Professor Stone shared
some examples of plans made by police organisations more than a decade ago. lLong
delays in the production of vaccines, specific requirements of lockdowns, the
need for trust and partnerships with local communities have all been anticipated
in extraordinary detail in many of these documents. Yet these plans seem to
have contributed little during COVID-19 and most police organisations have been
improvising as they go. They have been unprepared and unclear about what is
expected of them. Understanding why this happened is essential as we look at
learning lessons from the pandemic.


While restrictions on movement are in place in
most countries, there is a tremendous amount of variation in the specifics of
what different countries are requiring of their residents during the crisis.
Police forces are being asked to enforce very different versions of lockdowns,
protocolsand rules.  Some countries such
as Hungary have put severe penalties in place for interfering with quarantine
(including prison sentences), others have simply imposed tight curfews; some countries
have prohibited any outdoor exercise, while others, like Sweden, have
implemented very few restrictions. Countries like South Africa and India have
prohibited the sale of alcohol during lockdown, giving rise to new policing issues
for example corruption and bootlegging.


An opportunity to increase public trust and
strengthen partnerships


National emergencies often present opportunities
for police organisations to win greater trust and confidence from the public. Professor
Stone recollected his experience of living and working in New York City in the
aftermath of the September 2001 attacks, the last time the city was largely
shut down. The lockdown of parts of Manhattan produced some conflict between
police and civilians at the make-shift checkpoints, yet public support for the
police shot up to an all-time high. Would this be possible in the world today? Can
police responders grow in esteem and public confidence and trust increase? Although
such an increase in trust and confidence is not yet evident anywhere, it may still
be possible for some police organisations to accomplish something of this kind.


The COVID-19 pandemic is likely to remain a
danger for some time as the world braces for second and third waves, and new
quarantine orders. Police need now to be strengthening their partnerships with
health professionals and trusted local authorities if they are going to play
their roles effectively as this pandemic continues. Building alliances and
harvesting trust in the coming days, weeks and months is crucial. Remaining visible
and accountable, inviting scrutiny (even beyond what the law requires) will
help police leaders build trust and protect their forces on the frontlines. The
role of police leadership takes on a renewed importance during a crisis of this
nature.


Need to make common cause


During the Q&A session, an MPP alumna from
Uganda pointed out that developing and low-income countries have very different
challenges from higher income ones, with issues of poor public buy-in and
awareness of the importance of following norms and rules. Professor Stone said it
is possible that in Uganda and other low- and medium-income countries,
journalists, academics and civil society organisations could collaborate with
professional members of police forces to encourage more adherence to the rule
of law. Use of force, as we’ve seen in Uganda and other countries, burns trust and
voluntary compliance really quickly, and a partnership between oversight and
command is very important for long-term positive consequences for
police-civilian relations.


We concluded the webinar by reflecting on how this crisis will teach us a lot – whether it’s about the police forces around the world, or about human rights activists and journalists. Even where there is very little trust and inexcusable violence, there will be some within the police forces who will be interested in improving accountability. We need to join forces with them. It is not impossible for even the most beleaguered of police forces to gain in trust if they learn to police this pandemic in close partnership with health professionals and their communities.


This note is based on a webinar conducted by the ‘Policing and Criminal Justice’ alumni group of the Blavatnik School of Government. A new alumni webinar to discuss racism and police violence after recent events in the United States is scheduled for next week.


Urmila Pullat (MPP 2014) is an alumna of the Blavatnik School of Government and moderator of this webinar. She is an independent lawyer and researcher based in India.


Christopher Stone is Professor of Practice of Public Integrity at the Blavatnik School of Government.