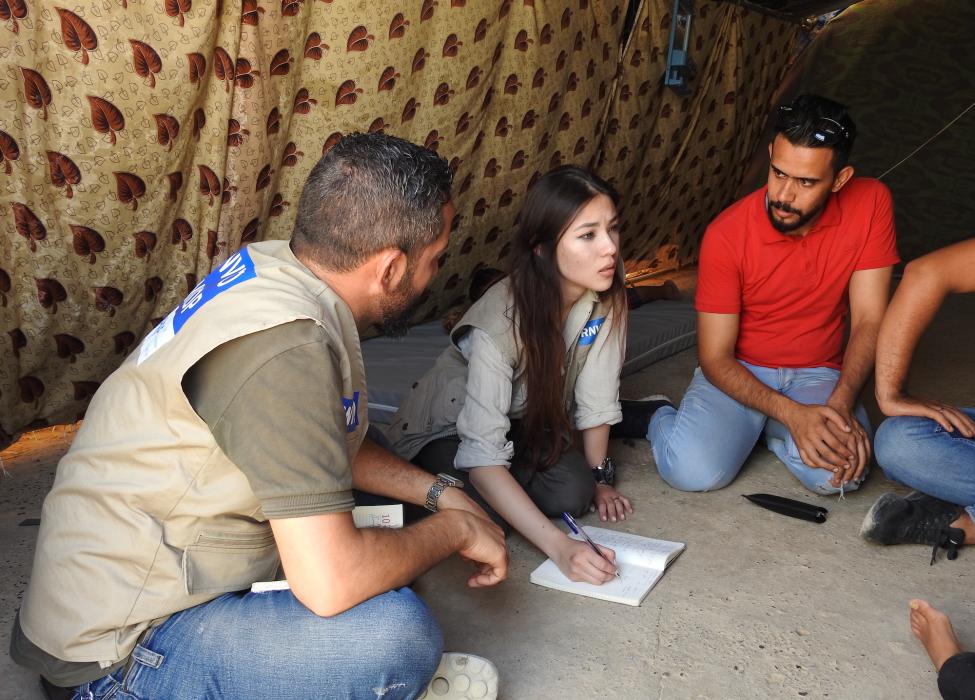 Aleksandra K. Wisniewska (MPP 2017) was an undergraduate student in 2015 when the refugee crisis unfolding on the Mediterranean Sea came to international attention. Seeing what was going on across Europe, while her own home government boycotted the EU’s quota plan of asylum-seeker allocation, Aleksandra rushed to join the effort. At just 21, she began volunteering during search and rescue actions at sea, securing landings of dingy boats off the island of Lesvos, Greece. Her efforts resulted in organising emergency aid transports to crisis hotspots, and inspired the creation of the first Polish rescue patrol operating on the Aegean Sea. But she was marked forever by what she had seen. She felt a responsibility to understand the reasons for desperation that had pushed the mothers to put their own children through such a dangerous journey.

“Perhaps” she thought, “if I attempt to first understand it, I can someday prevent it.”

After the anti-smuggling laws led to the criminalisation of lifesaving humanitarian assistance at sea, Aleksandra became a field researcher carrying out data collection in French refugee settlements, around the time the French government was planning the destruction of the so-called “Jungle” in Calais. Next, Aleksandra went to work for UNDP Istanbul’s International Centre for the Private Sector in Development in Turkey on fostering employment opportunities for Syrian refugees, and then for the UNDP Syria Sub-regional Facility on the Regional Refugee and Resilience Plan in Jordan. While working there, she decided to fly into Iraq, where she witnessed the deadly urban warfare of the Battle for Mosul, and visited what the Iraqi forces labelled ‘ISIS family camps’ where some of the women, children and elderly fleeing the bombed city were being kept. A generation of children born under the self-proclaimed caliphate were refused citizenship, leaving them stateless and unable to return to areas of origin.

Becoming acutely aware of the need for effective policymaking, further compelled her to study public policy to learn the skills required to help with the effort to rebuild the war-torn societies.

“When I applied to the School, I wrote on my application that as soon as I finished the programme I am planning to return to Iraq to try to contribute in some way to finding a policy response.”

The Blavatnik School of Government appealed to Aleksandra because it represented a new, diverse and progressive project within a historic institution. However, the contrast for Aleksandra between the devastation of Mosul and both the grandeur of Oxford and the normality of daily life as a student was stark. Adjusting to her new life as an MPP student was not easy:

“I had just come from this completely different world and could hardly imagine that these two worlds were coexisting… I had to force myself to adjust quickly and kept telling myself that pragmatically, this is where I need to be to gain the knowledge and skills necessary if I want to meaningfully impact the worst humanitarian crises.”

When the time came for Aleksandra to organise where she would carry out her MPP summer project, there was only one place she had in mind. Convincing her course leaders to undertake the project in a conflict zone, however, was no small task. When Aleksandra successfully persuaded the MPP teaching staff to let her return to Iraq, she joined a leading Iraqi NGO responding to the siege of Mosul, running a camp of 70,000 internally displaced persons in a desert, and community centres providing psychosocial care for children affected by ISIS. While serving next to her Iraqi colleagues, she completed her summer project written work on the problems of stigmatisation and forced displacement of the local civilians perceived as the “wives and children of ISIS”.

After her time in Iraq, Aleksandra heard that one of her heroes from the humanitarian world, Janina Ochojska, the founder of Polish Humanitarian Action, was planning to run for election to the European Parliament. Aleksandra, having learned from her MPP colleagues on running political campaigns, was keen to offer herself to support her role model in their first entry to the political sphere, and joined her core campaign team. Focusing on issues of migration, environment, inclusion and civil society, they managed to secure a mandate with 307,227 votes, the second-highest result amongst opposition candidates in Poland.

Following her foray into political campaigning, Aleksandra returned to the world of humanitarian work. Having learned that Polish Humanitarian Action had just opened a new operation in Yemen, she put herself forward to run it. She first coordinated a project responding to a cholera epidemic, and soon lead the relief effort as the Head of Mission. When the pandemic struck and emergency evacuations started, Aleksandra was among only 80 international humanitarian aid workers in the whole of South Yemen who remained to continue running the humanitarian response. A chance encounter led her to meet another MPP student from a previous class who had also stayed to help with the relief efforts, which provided them with a lifeline of friendship through this challenging period.

During the pandemic Aleksandra and her team rebuilt and equipped a health facility, hiring doctors, nurses, midwives and pharmacists and began running it. Soon, the facility was seeing up to 1500 patients per month. The operation has since grown to seven medical facilities, including three in frontline areas affected by the most active conflicts in South Yemen. Over the past two years, Aleksandra’s team of 20 programmatic and operational staff, 100 medical personnel across the facilities, and experts supporting the mission from Warsaw, have served over 200,000 persons in need.

Since graduating from the MPP, Aleksandra has been named first for Social Impact in the "25 Under 25" ranking by Forbes Poland. After returning from her last assignment in Yemen, she was recognised with the KARSKI2020 Award of the Jan Karski Educational Foundation for "fortitude, self-sacrifice, courage in support for others during the 2020 pandemic", and she received the Green Hero 2021 award of the BNP Paribas Film Festival & UN Global Compact Poland Network for "fortitude in actions and commitment to human rights".

Aleksandra’s experiences in protracted humanitarian crises caused by armed conflict, have led her to believe that the real potential for change must be sought within the political sphere. Consequently, this is where Aleksandra sees her future public service.