Tim Nusser, a voice for young people in politics 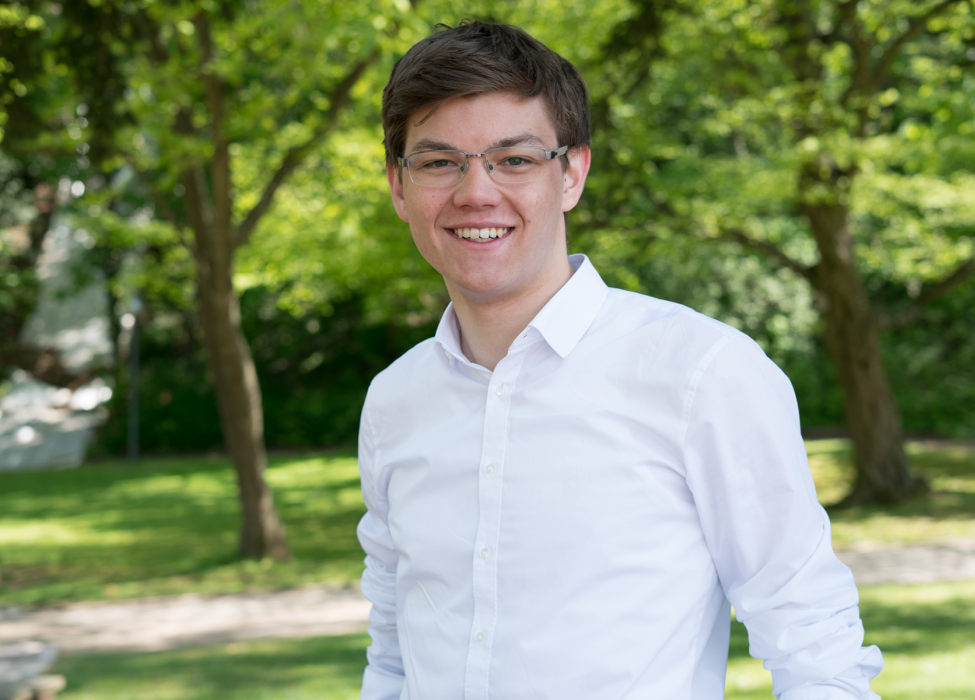 Having barely turned 23 years old when he started the Master of Public Policy, Tim Nusser is one of the youngest students in the MPP class of 2019. Having come to Oxford just two weeks after his undergraduate graduation, he is no stranger to embracing new challenges.

Tim has always been interested in politics but, as a keen footballer during his teenage years, playing several times a week left him with no time for political engagement. It was a knee injury that stopped him from playing that set him on a path to political activism. “The German parties all have ‘foundations manifestos’ [Grundsatzprogramme], which set out their core values and political visions. Nobody ever really reads them, but I suddenly had all this time on my hands.” Reading these manifestos gave Tim a chance to challenge his perceptions of the parties and he found himself aligning with the vision set out by the Free Democratic Party. Frustrated by the sense that the party at the time didn’t reflect what was in the manifesto, Tim filled out membership forms for the Free Democrats and its youth wing, the Young Liberals.

“I wasn’t happy with the current situation and I asked myself what I could do to bring about change – if I wanted liberalism to be enacted as it was represented in the manifesto, I would have to play my part in that.”

His first campaign for the 2014 European elections was a challenging experience. “The party was at a low point and you would always see the same few people out canvassing – but it did give me a crash course in campaigning.” Tim’s perseverance gave him the opportunity to take on extra responsibilities, progressing on to become a member of the Young Liberals state board by the time he started at university, and later becoming the youngest member of the federal board.

In the summer of 2016, the Free Democrats in the electoral district of Heidelberg found themselves without a viable candidate for the 2017 federal elections. Tim reflected on his initial reasons for joining the party.

“I had wanted to create change, and what better way to do this than to be the main local representative for your party in the elections.”

In German elections, voters have two votes: one is a direct vote for a member of parliament in their constituency, and the other is for a political party. For the second vote, Germany’s 16 states each draw up a state party list and the vote share from the second vote determines which candidates from these lists end up in parliament. Tim worked to build relationships across his local electoral district and was successfully nominated as the Free Democrats’ candidate in Heidelberg. He also made it onto the state party list at number 21. Although he did not ultimately end up as an MP (the Free Democrats’ vote share meant that the first 12 candidates from the state party list were elected to parliament), the experience provided a valuable insight into the realities of political campaigning.

Given his experience to date, it is no surprise that Tim is an advocate for young people entering politics – one of the central issues under discussion at this year’s Challenges of Government Conference, which Tim attended.

Tim applied to the MPP due to an interest in the course’s content, but also because of the School’s public service ethos. “The ethical aspect of policymaking seemed to be a running theme throughout the course description. I also read Paul Collier’s latest book, The Future of Capitalism, directly before applying, which contributed to my interest in studying at the School. Some of the questions posed, especially in terms of how to restore moral values beyond individualism, aligned with my experience in a liberal party.”

The international nature of the MPP was also a factor that made studying at the Blavatnik School stand out.

“The MPP for me was an opportunity to not only study abroad but also to be in an extremely international programme. Because German universities, especially at undergraduate level, are very homogeneous in their makeup, this seemed like a prudent thing for my personal and professional development.”

Overall, Tim considers the learning environment and culture of intellectual curiosity as a highlight of studying in Oxford. “When you’re spending time in the college MCR [the ‘middle common room’ for graduate students in Oxford and Cambridge is both a physical room and a student body in the college], you get talking to people who do all sorts of different things. I’ve had conversations with scientists on how scientists can influence policy and what role they should play in the policymaking process, and I’m looking forward to bringing that conversation into the classroom for our Evidence in Public Policy module.” In his college accommodation, Tim shares a floor with two fine arts students, one finance student and a physics student. “You’ll be in the kitchen and hear people having an in-depth discussion about the art projects they’re working on. This kind of thing happens very frequently here – everyone is doing amazing things in their own field and it’s good to feel like a part of that."