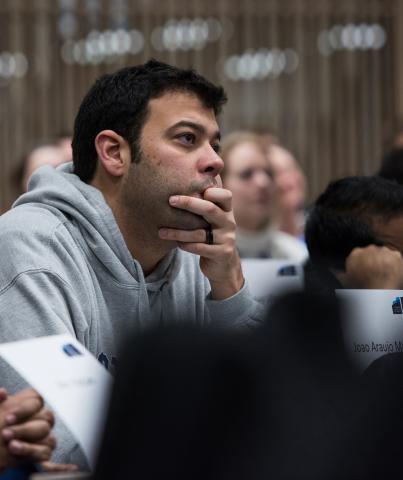 Brazilian national and political scientist, João Francisco Maria (MPP 2015), is one of five students this year to receive an Oxford-Lemann Fellowship. The scholarship is awarded to Brazilian nationals who are ordinarily residents in the country, and who have both demonstrable academic merit and interest in creating social change in Brazil. (visit the Blavatnik School Funding options page to find out more).

João more than met the criteria, having spent years working for various NGOs, and within the federal government where he acted as a coordinator for a major programme tasked with improving water supply for rural poor areas, as well as having undertaken work with isolated indigenous communities in the Amazon.  He also spent over a year living in a slum near Brasilia, working with the area’s garbage collectors, in order to learn why the area was invisible to decision makers, and what he could do to improve their standard of living.

In 2014, João ran as a candidate to the parliament of his state for a newly formed political party, headed by Marina Silva, called REDE Sustentabilidade. Following the elections, João decided to undertake an MPP in order to develop his understanding of the ways in which government and public policy work. “I wanted to learn how I could bring about real-world applications of my vision for public policy in Brazil,” he said.

“I have friends who are Lemann Fellows,” explains João. “I knew they’d received not only financial assistance, but were also part of a network of leaders who were all making inspiring changes in Brazil, from implementing youth engagement programmes, to undertaking top-level social and political policy transformation.” He knew he wanted to become a part of this community, so began researching institutions with whom they partnered with. As soon as he read about their ties with the Blavatnik School in Oxford, his mind was made up.

“It’s a true honour to be a recipient of this scholarship. It’s only because of this support that I was able to take up my place at the School, and I’m excited to return to Brazil to utilise the lessons I’ve learnt on the MPP.”

This year João has honed his comparative analysis thanks to the diverse nature of his classmates, as he’s been able to compare global political systems and policy challenges. “I found my Negotiations class to be very helpful, too, as it gave me a solid foundation of skills and strategies which I will be able to use daily in my professional life.”

With the year drawing to a close, João has begun pondering his next steps: “I aim to stand for election in Brazil again in 2018, but before that, I want to continue my research into improving public policy relating to water supplies for poor communities.”