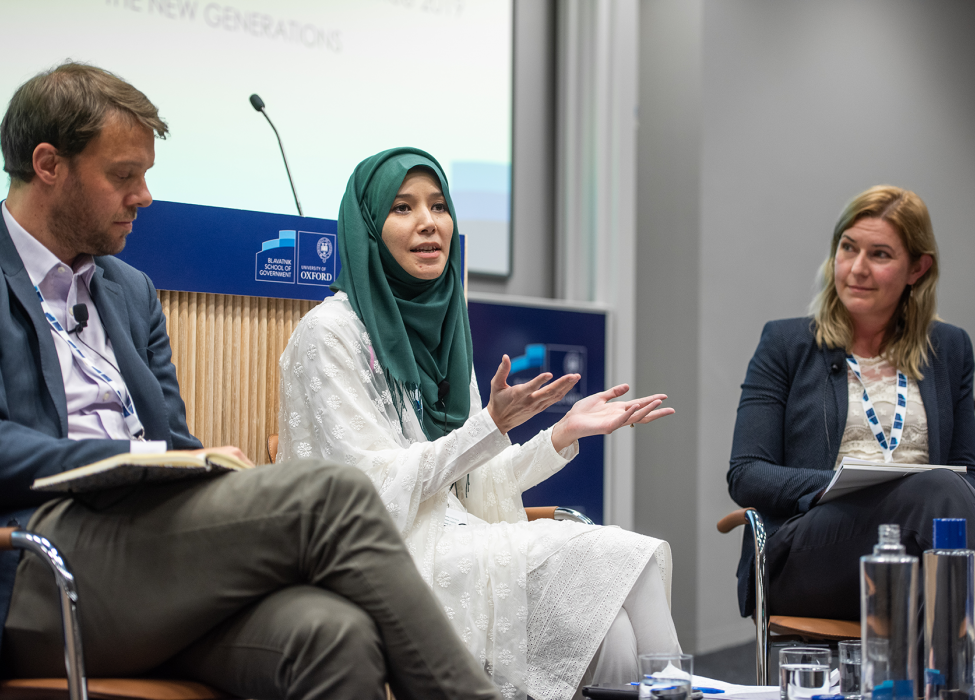 Batool Asadi (MPP 2020) first came to the Blavatnik School of Government in November 2019 as a speaker at the Challenges of Government Conference. Working in the elite Pakistan Administrative Service (PAS) at the time as an Assistant Commissioner in Balochistan – the first female to serve in this capacity – Batool discussed her experience working to combat corruption and improve integrity in the civil service. An advocate for institutional reform in Pakistan, she points to the fact that many of its laws and institutions have not been updated since British colonial rule. “Reform in Pakistan is urgently needed to revamp democracy and ensure that the public service meets the needs of the population it serves,” she says.

During the two days of the conference – meeting other delegates and speaking to faculty members – Batool set her sights on the Master of Public Policy (MPP). “I was inspired by the speakers and the content of the conference, and also by learning about the diversity of the MPP class,” she says. “I made a resolution that I had to be here next year.”

“Now I’m at the School, the opportunity to discuss and share ideas with classmates from all across the world is incredibly valuable. There is a culture of open-mindedness where everyone has a genuine desire to learn from one another.”

The MPP is helping Batool develop a more nuanced attitude to policy issues – the Foundations module, co-convened by Tom Simpson and Jonathan Wolff, has been a primary factor in this. “Foundations has helped me to see the importance of acknowledging different contexts – if a policy works really well in one place, it can’t necessarily be applied elsewhere.”

“The MPP won’t give you simple solutions to policy challenges because, more often than not, these don’t exist – but it will give you a framework to find your own solutions.”

As an Assistant Commissioner, and later as Deputy Secretary (Staff) to Balochistan’s highest-ranking civil servant, the Chief Secretary, Batool had already come across a range of complex policy issues in her work. Her role encompassed a number of duties, including giving inputs on draft legislation and facilitating policy implementation. She worked on policy areas from school enrolment to polio eradication – all while acting as a trailblazer for women in the PAS.

It was after passing the competitive examination for entry into Pakistan's civil service that Batool had the opportunity to work in Balochistan. “I was often asked why I decided to go to such an underdeveloped area,” she says. “Most women who passed the entry exam were sent to more developed provinces like Punjab and Islamabad, and there were very specific ideas about what sort of jobs were suitable for women.”

“I was told women couldn’t undertake complex and challenging tasks involving problem solving, law and order, public nuisance matters, direct implementation of government policy and so on. I took this as a challenge, and wanted to show that it’s not acceptable to deny women’s ability to take on such roles.”

This desire to improve women’s representation was Batool's initial motivation for pursuing a career in public service.

“In order to make policies that work for women, you need women in power. Being in a position of authority enables you to move things in favour of the worst-off people and give a platform to those whose voices often go unheard.”

She began to witness a shift in attitudes during her time in the PAS; she started work as the only female civil servant at Balochistan’s provincial headquarters in Quetta, whereas today there are 12 female officers working there. “A lot has changed, and I hope to see this progress continue,” she says.

Batool is looking forward to further developing the practical skills needed to be an effective civil servant, taking modules on public budgeting and management of public organisations. She also views the development of soft skills such as listening and collaboration as one of the MPP’s key strengths. “Civil servants must be able to listen to others and be tolerant,” she says. “Being part of such a diverse class deconstructs your preconceived notions of what policy should be and creates this tolerance.”

“Public service is often criticised for being too resistant to change and not listening to the voices of those it represents – the MPP is giving me the skills to work towards building a public service that works for everyone.”

Batool is a Vicky Noon Scholar.