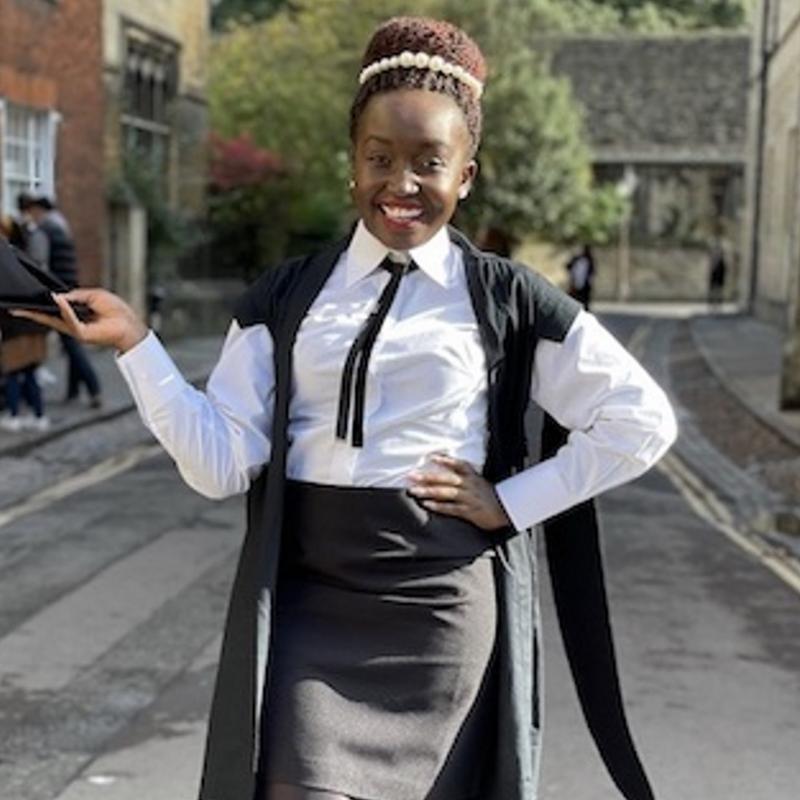 In 2016, Esther Soma graduated from Yale University with a degree in Global Affairs. She was awarded a Yale fellowship to pursue research on mass-atrocity prevention and soon transitioned to work as a Policy Assistant for an international peacebuilding organisation.  Working on conflict-resolution in South Sudan, sparked in her an interest in policymaking. However, she felt there were gaps in her knowledge she could only fill by being on the ground in South Sudan and getting to know the communities she was trying to serve better.

Keen to return to her home country to contribute to the peacebuilding efforts, Esther moved to South Sudan a year later. She initially supported women networks’ advocacy initiatives and was nominated to provide Technical Support to the delegates in the Peace Agreement negotiations. Esther was then hired by UN Women to  support their peacebuilding advocacy, and engagement with women’s networks to ensure that gender issues were not excluded from the national peace process.

After the peace agreement was signed in 2018, Esther moved to support the agreement’s implementation, collaborating with policymakers at the international and national level. During this time, she came to realise that although she had the experience of working with civil society and at the international multilateral level, she needed more of an understanding of the policy sphere. She decided it was time to return to her studies.

“I was talking to policymakers in both the international and national sphere, proposing  reform ideas and views to them. I felt that it was time to acquire the skills to do this policy work too.”

Based on her work in women, peace and security in South Sudan, Esther began considering postgraduate studies in public policy. She had become aware of the Chevening scholarship in the UK and was drawn to it. She decided to pursue the scholarship and began researching programmes in the UK.

The MPP at the Blavatnik School of Government caught Esther’s eye thanks to its holistic approach to understanding policy, drawing lessons from law, economics, philosophy and more. The diversity of the MPP class was also a pull for her, as she believed interacting with classmates from all over the world would enrich her learning experience.

When applying for the scholarship, Esther reflected upon her entire education and career so far to demonstrate that she possessed the leadership and community building skills that Chevening seeks from applicants. Her experience leading on funding proposals, her peacebuilding work in South Sudan and the networks she has maintained since high school were all examples that made her a strong candidate for the scholarship.

“You need to put time into the application. You need to have a clear understanding of yourself, what you want out of a master’s degree, and what you want to do after – even if it’s just an idea of where you’re going.”

Contacting her references in advance in order to brief them on the skills that Chevening expects, along with areas that would be useful to highlight also helped to put Esther’s mind at ease during the process. In fact, in doing so, she discovered that one of her former managers who was acting as her reference had been among the first Chevening Scholars back in the 1980s.

When Esther was offered the scholarship, she was thrilled:

“I would not be able to do this without a scholarship so I am hugely grateful to Chevening for this. The knowledge I am getting from this experience will never leave me; it will only be built upon.”

Having been in Oxford only a short while so far, Esther has been struck by the sense of community she is already feeling with her Chevening colleagues. The many social activities the scholars and classmates have organised have already made adjusting to life in a new city much smoother. While she expected incredible class content and passionate teaching, given it was something that attracted her to the MPP in the first place, experiencing it first-hand still managed to impress her. She has already been forced to think outside of her own experiences, and to listen to and consider a range of other views.

So far, the MPP has delivered on the promise Esther saw in it. She is confident that her classmates and Chevening network will push her to develop the skills and tools she needs to help build lasting peace in South Sudan.