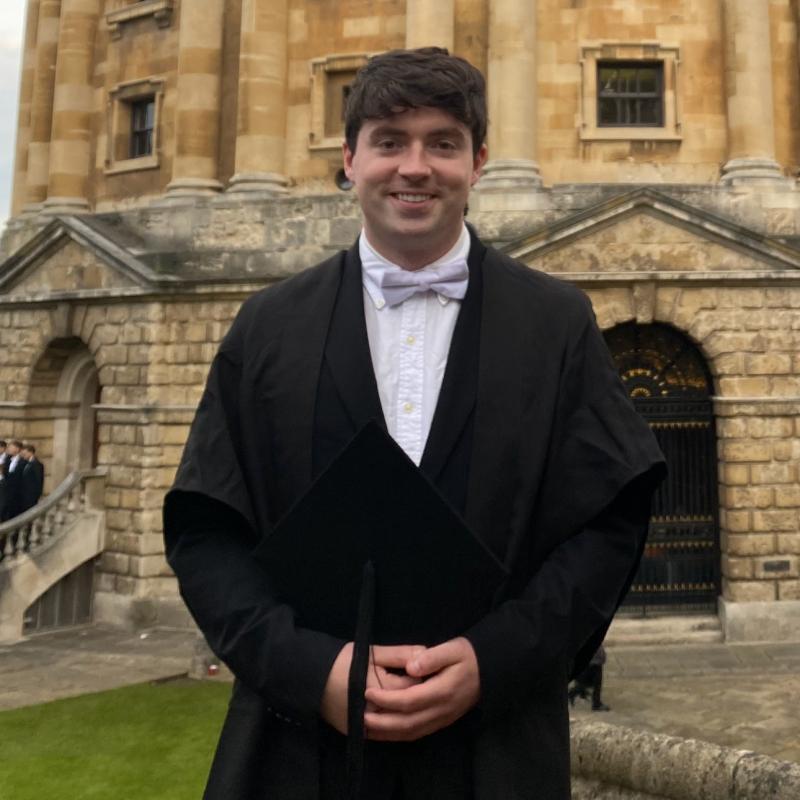 Hailing from County Laois in the midlands of the Republic of Ireland, Eimhín McEvoy (MPP 2021) has been active in politics since his undergraduate studies in law when he joined the centre political party Fianna Fáil.

After working with the party in Brussels and following placements at the UN in New York and OECD in Paris, Eimhín volunteered on several national political campaigns. He then returned to his home county of Laois and got stuck into local politics.

Having gained five years’ experience in management consulting and qualifying as a Chartered Accountant (ACA) where he worked with a number of private and public sector clients, he became familiar with the challenges that come with leading change. However, he began to realise that he was lacking the level of hard technical expertise and experience required to navigate the policy side of an elected official’s role effectively.

With future ambitions to run for local election on a platform focusing on health, quality of life, climate resilience and urban renewal, Eimhín began looking into postgraduate courses that would enable him to explore these areas in more depth, build technical policymaking expertise while equipping him with the soft skills to negotiate change, build coalitions and implement policy.

“If you run for election, you need to be emotionally ready and empowered to make change happen in addition to representing your community. For me, the MPP offered a chance to engage in self-reflection, work on my soft skills such as public speaking and debating and to bridge the gap in my hard technical policy knowledge for when I run for office. When I found out about the Blavatnik School I knew that no other institution would do. This was the place to study public policy if I wanted to deeply engage with fellow students, learn to make real change, be supported on my journey and hit the ground running.”

Now at the School, Eimhín’s eyes have been opened to how challenging and complex it can be to make real evidence based public policy reform in government. Yet the MPP is ultimately teaching invaluable lessons in how to bring people together from across the political spectrum, to work across the aisle and bring people with you to design policy in a collaborative process that crucially does not further polarise communities.

"Teamwork and collaborating with people with contrary views plays an important part of our personal development at the Blavatnik School. The diversity of the student cohort cannot be matched by any public policy school in any corner of Ireland or the UK. Some of my best friends here at Oxford are those who hold the most divergent political views to mine.”

Returning to education after several years in the private sector was initially tough, however, Eimhín notes that the Blavatnik School’s faculty, lectures, curriculum and communal nature seamlessly integrate and adapt to those with professional experience to share and not just those seeking a purely academic experience.

“Other public policy schools in Ireland and the UK do not use the case method in their teaching. For me, the case method has been invaluable in understanding how real-world leaders practically take on policy challenges in difficult circumstances and often with very limited information and few allies. This is directly applicable to what I want to do after the course.”

Eimhín is not alone in his ambitions to run for office amongst his MPP classmates and has been actively involved in the student-led initiative ‘Ready to Run’. This informal group has invited high-profile speakers from the political sphere to visit the school and speak candidly about their experiences. From the basics of canvassing, speech writing and debating to hearing from former MPP students who currently hold public office, the initiative is helping to equip students who wish to seek elected office with the practical and strategic tools that they will need to run successful campaigns.

For Eimhín, this learning exchange was made possible with the support of the Political Leadership Scholarship which has represented a fundamental step in his journey to elected office in the future. The scholarship enables those already actively engaged in politics in Ireland and the UK to be supported in their studies at Blavatnik School, bridging the gap between budding practitioners and academia.

“It is becoming increasingly apparent in Ireland and elsewhere that young people cannot afford to enter politics given the upfront costs. Local politicians in Ireland do not earn high salaries and so it would not have been possible for me to fund the course and subsequently run for office. As someone from my background whose parents were never given the chance to go to university, I’m immensely grateful for the support that the Political Leadership Scholarship has given to me and my family to pursue this course, something which I hope to repay to my community.”

Yet there is more to the scholarship than just financial support. For Eimhín, the scholarship presents an opportunity to build networks and genuine friendships with the next generation of leaders in Ireland and the UK, whose leadership will be underpinned by strong values, pragmatism, integrity, compassion and the ability to build coalitions in polarised times.

“The scholarship enables discussion and cooperation between futures leaders of both countries who will hopefully rebuild relations across the Irish Sea which regretfully have come under huge strain in recent years, due to the outfall of the UK’s exit from the European Union and the resulting struggle to uphold the Good Friday Agreement and peace in Northern Ireland.”