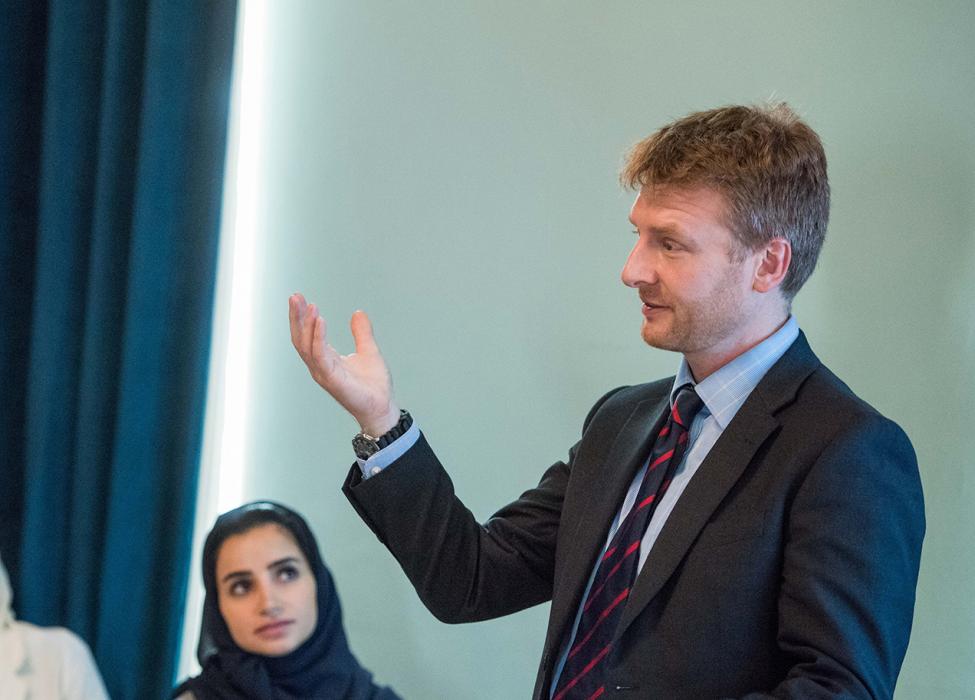 What is the nature of trust, when is trust justified, and how is it sustained? These are the core questions of a book that Dr Tom Simpson, Associate Professor of Philosophy and Public Policy, is currently writing and which is directly relevant to policy and government.

“There are many societal benefits that come from high trust. There’s a very strong correlation between high trust societies and economic growth, and governments in these societies tend to be effective, with low levels of corruption.”

A way to measure trust is to identify the proportion of people in a society who think that, generally speaking, other people can be trusted, which in turn creates trust in institutions. “If there’s a high level of trust between individuals, you see a society-wide effect.” Tom’s research explores the factors which undermine trust, and the conditions in which high levels of trust can be maintained.

As a former soldier, he is also interested in the ethics of security and technology, and advises the UK government on related policy issues. He has given evidence to the UK parliament’s Joint Committee on Human Rights, and to the Intelligence and Security Committee, the parliamentary select committee which oversees intelligence agencies. He has also worked with the All-Party Parliamentary Group on Drones, and was cited in the Group’s report on the UK’s use of armed drones, published in July 2018. His academic writing on the ethics of war includes a paper on the morality of unconventional force, which looks at the moral norms that ought to govern the grey area between war and peace.

“We are used to a clear distinction between war and peace. We’re now seeing this distinction break down, with the increasing use of special forces, electronic surveillance and intelligence agencies to combat terrorist and criminal networks that span borders. These policies pose largely unasked questions within philosophy, and this research topic will become even more relevant over time.”

Tom’s research also covers political territory. His paper ‘The Impossibility of Republican Freedom’ argues that legal and social freedom can only be secured with high levels of civic virtue. “A significant strand of political theory proposes that we can do without virtue, and we secure freedom solely by focusing on making institutions. This misses the essential role that individuals play, in their commitment to protecting others’ freedom - we can’t do without civic virtue if we want to ensure citizens’ freedom. This is one of the ways in which trust is essential for stable, prosperous, free societies.”

In the 2017/18 academic year, Tom convened an event series on ‘Aspects of Conservatism’, bringing speakers to the Blavatnik School to discuss different areas of the conservative outlook. “People are looking for alternatives to the centre-left consensus that dominates public life. The right is both widely dismissed in the academy, and electorally successful. I’m trying to explore the intellectual basis for the policies and outlooks found in this space.”

Brexit is another topic of interest, and Tom has written about the call for a second referendum, a prospect which he is strongly against because of its implications on trust.

“If it happened, it would be profoundly destructive of trust. Anxieties around trust are part of what animated the vote to leave the European Union in 2016, and these anxieties were not illegitimate. Democracy should be responsive to people’s concerns, yet politics has become simultaneously technocratic and dismissive towards the plurality of citizens’ actual attitudes. The depth of this disrespect for the electorate has become apparent with the willingness of leaders to overturn the referendum verdict. There’s a real need to restore trust in our governing class and the institutions that run society.”