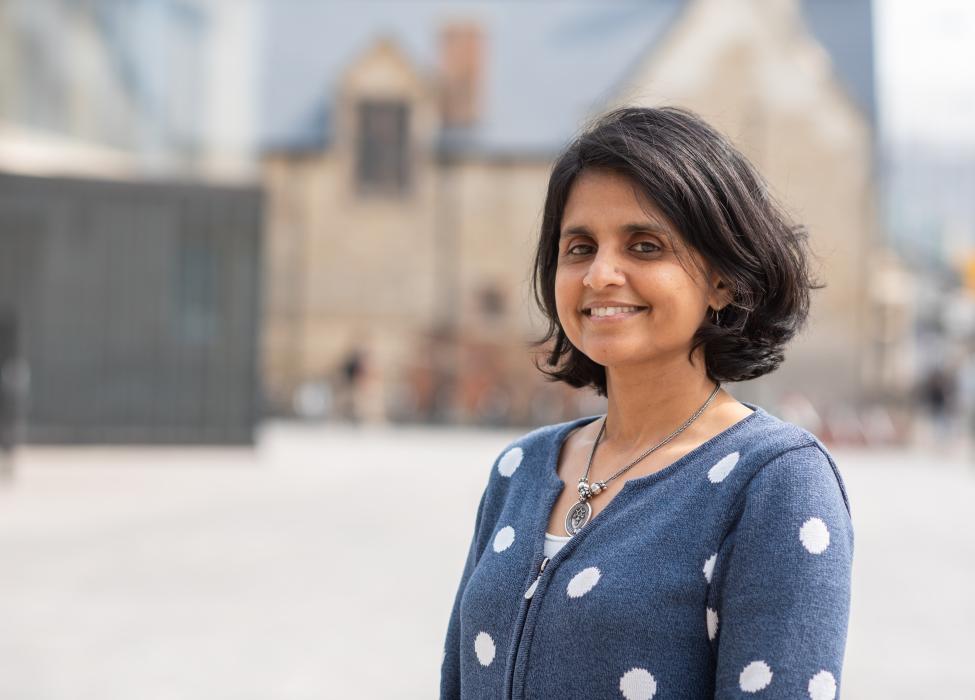 Anandi Mani is Professor of Behavioural Economics and Public Policy at the Blavatnik School of Government. Her research interests are in the area of development economics, with a specific focus on the behavioural economics of poverty and social exclusion, gender issues, and public good provision.

Research on poverty is particularly relevant at a time when upward income mobility is decreasing in various parts of the world. In the Anglosphere, inequality levels are now roughly as they were at the turn of the twentieth century. In the US, between 1979 and 2007, the top 1% of households received income growth of 241%; meanwhile, most US workers experienced near-stagnation in terms of real purchasing power.

“Given these statistics, it is not surprising that people do not know where to turn, and politicians who offer simplistic answers become appealing. People are having to work harder and harder just to stay in the same place. You have to motivate yourself to keep going by believing that your hard work will eventually pay off.”

This narrative, linking hard work to guaranteed success, is central to the debate around wealth redistribution, which forms part of Anandi’s work. “Most people see meritocracy as important, but how do we separate the role of hard work versus luck to establish what each person ‘deserves’?” In an experiment asking participants to propose tax rates on incomes earned through luck or effort, Anandi found that views of the non-poor about tax-based redistribution are shaped by a self-serving narrative of their own outcomes. “The rich, especially those who succeeded through effort (the ‘meritocratic rich’), do not favour high tax rates, because they believe effort should be rewarded – but they discount the possibility that those who ended up poor may have put in as much effort and just had bad luck.” Maintaining a favourable self-narrative even trumped financial self-interest: non-poor participants were less likely to look for evidence that could contradict their favourable self-narrative, even when incentivised to do so.

Another focus of Anandi’s recent research is the link between poverty and decision-making. “There are a lot of choices that poor people make which seem self-defeating. There is systematic evidence that people who are poor are tardier in terms of keeping appointments, they have fewer conversations with their children and so on. Given that many of these choices are not obviously about a lack of money, there is often a lack of sympathy and a sense that people are poor because of the bad decisions they make.”

While some of these decisions may seem inconsequential, they have a cumulative effect. For instance, research has demonstrated a significant gap in vocabulary between children from low- and high-socioeconomic status families at just three years old, partly in relation to the amount of conversation that parents have with their children. This suggests that such everyday choices of the poor could be leading to worse outcomes.

“My research agenda was to see if the causality works in reverse: is there something about being poor that depletes your mental resources so you cannot pay attention to the things you know are important and therefore make worse choices?”

Anandi’s research has included surveying sugarcane farmers in India before and after harvest and tracking drought-ridden farmers in Brazil over the course of a full rain season. “We are exploring two important elements of being poor: the first is having less money and the second is having an uneven income stream. The World Bank has set the poverty line at $1.90 per day, but the reality in developing countries is that – even if you are earning that amount – you don’t receive it in a steady stream: sometimes you’ll get nothing and sometimes you’ll get more. We find that this kind of uncertainty and the vulnerability it brings are significant factors in depleting attention.”

The next step is to look at solutions. “It is the poor who would benefit most from purchasing insurance; they’re the most vulnerable to heading into a downward spiral if, say, the main breadwinner in the household loses their job. Despite this, it is very hard to get poor people to take up insurance, as they feel it’s a luxury for so many reasons. That is an interesting problem as a behavioural economist: if the uncertainty is the biggest factor depleting mental attention, how do we design products that provide more steady income and assurance? And how would we make it available to them if not by purchasing it?”

“It’s striking that, overall, the psychological challenges of poverty are qualitatively similar in developing and developed countries. I would say the same is also true in the other strand of my work, gender and political participation. When it comes to women holding elected office, even in developed countries, the numbers are surprisingly low: on average, around 22% of elected political positions within countries are held by women."

Unlike in other career fields where work is being done to address gender disparities, such as STEM, getting into politics does not necessarily involve following a linear career stream. “In some of my recent research, we wanted to understand the groundswell processes that give people the relevant experience, networks and exposure to make them viable political candidates, and we found that there were gaps with regard to women’s involvement in these processes. Having found the areas where these gaps exist, we can now look at how to change this, thus creating a clearer pathway for women to enter politics.”