For this special discussion, the current President of Colombia joins Dean Ngaire Woods remotely via Zoom to talk about his new book Camino a Cero (The Road to Zero), an in-depth study into Colombia's strategy for achieving carbon neutrality by 2050.

Please note this event will take place online through Zoom. 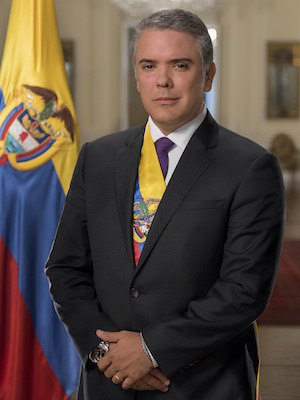 Born in Bogotá on 1 August 1976, President Duque received his law degree from Universidad Sergio Arboleda, where he majored in philosophy and humanities. He is an expert in economic affairs, with executive studies in Harvard, a master's in public policy and public management from Georgetown University and a master's in economic law from the American University.

He has worked as a columnist and professor. He was Head of the Culture, Creativity, and Solidarity Division at the Inter-American Development Bank (IDB), where he worked on social innovation, entrepreneurship, youth, and creative economies. He acted as consultant to the IDB presidency and as senior advisor for Colombia.

He was elected Senator of Colombia from 2014 to 2018. As a Senator he put forward several Laws of the Republic: the Orange Law that promotes creative industries and culture as an engine for development; the Law on Severance Funds, which permits parents use their severance funds to pre-pay their children’s education and that of their dependent persons; the Law on Defibrillators, that provides that all public places and emergency transport be equipped with resuscitation equipment in Colombia; the Law on “B Companies” that provides the conditions for creating and establishing commercial companies of Collective Benefit and Interest; and, is co-author of the law that extended maternity leave from 14 to 18 weeks.

In his latest work, ‘Camino a Cero’, he explains the country's strategy to achieve carbon neutrality in the year 2050. He argues that Colombia only represents about 0.6% of all global GHG emissions, but that it is one of the most vulnerable countries to the devastating effects of climate change. “Our beautiful country is the second most biodiverse on the planet and has 52% of the world’s moors. The way Colombia acts is, then, a benchmark and a great call to global action and, above all, a call to the richest and most powerful nations to keep in mind that if Colombia does so, they should follow the same way", he emphasises.

Ivan Duque, in addition his legislative activity, has been a relevant figure in several of the country’s recent political developments. He drafted, submitted, and defended the legal challenge against the Legislative Act for Peace, before the Constitutional Court, that curtailed the fast track and allowed Congress to make changes to the implementation of the peace agreements with the FARC. In 2016 Semana magazine and the Fundación Colombia Líder (“Colombia Leader Foundation”) chose him as one of the country’s outstanding leaders and during his three years as congressman he was elected best Senator by his peers, and by several local organisations that follow and provide metrics on the work of Colombian legislators.