A year after the Beirut blast: Is Lebanon falling into the abyss?

A stopped clock became a metaphor for Lebanon's political paralysis. 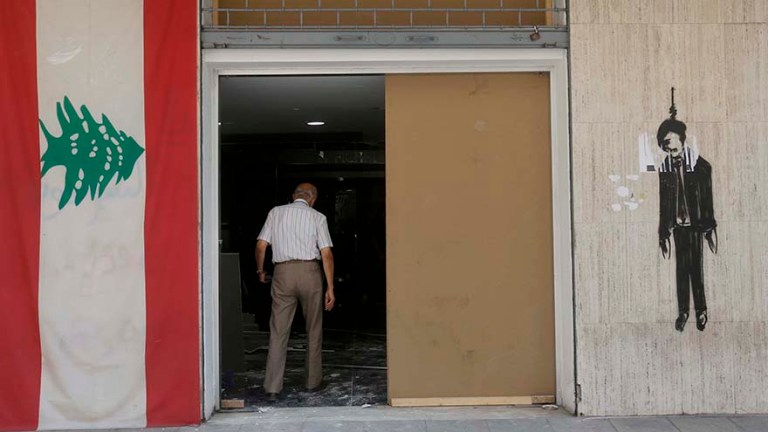 Beirut, 4 August 2020. Amid the rubble caused by one of the most powerful non-nuclear explosions in history, lay a clock with hands frozen at 6:09 PM. The clock not only marked the exact moment of this tragedy, it also became the metaphor for the political paralysis over the years that plunged Lebanon into darkness.

One year later and still without a government, Lebanon faces one of the most severe global crises since the mid-nineteenth century. More than half of Lebanese citizens live in poverty, some begging on the streets for money or rummaging through bins for scraps of food to eat.

For the first time in years, citizens across all social classes are feeling the impact of the crisis as medicines are missing from shelves and electricity runs only two hours daily. While some queue for hours on the road to fuel their cars, others fight in stores over powdered milk costing them their monthly salary.

With no political restructuring plan in sight, survivors will continue to be held hostage in a land that shows no signs of a better future. In turn, conflict and social unrest may arise and send shockwaves across the region.

The one-year anniversary of the explosion provides reason to mourn its victims as well as reflect on the dangerous consequences of an outdated political system that could put Lebanon on the path to becoming a failed state.

Lebanese citizens currently face the most drastic deterioration of their human rights in decades.

Since the start of the economic crisis last year, the streets of Beirut witnessed a couple of public suicide attempts. The blast and COVID-19 pandemic that exploded amid a financial crisis were the tip of the iceberg of a larger crisis destroying peoples’ futures.

Lebanon hosts the largest population of refugees per capita in the world. Almost nine out of 10 Syrian refugee families live below the extreme poverty line and some Lebanese families have moved into Palestinian refugee camps as they can no longer afford to pay rent. A government that fails to provide the most basic public services and exacerbates a refugee crisis can be regarded as a failed state.

Shortly after the blast, the absence of any government support was evident. Victims were left on their own, sweeping the streets from the rubble, repairing homes, searching for bodies and assisting the most vulnerable. Many survivors endured psychological trauma, resulting in added stress from the multiple crises.

Donations from the diaspora are now the last source of hope for those who cannot afford to leave, taking a large toll on people’s mental health as clinical depression is on the rise. Yet with medical staff emigrating and power cuts in hospitals, mental health care is also becoming inaccessible. Previous generations, who have fought blood and tears for their country during the civil war, have now become restless after losing their savings to hyperinflation.

When a nation like Lebanon is weakened at all levels and the standard of living drastically declines, political and social unrest become a default consequence.

A state of paralysis

Lebanon’s leadership vacuum has been the result of an administration headed by a sectarian incompetent militia – hungry for both power and fortune. The long absence of political reform, elections, and the creation of a credible coalition, combined with the collapse of the state’s legitimacy are increasingly pointing to a failed state.

The country’s unique power-sharing system, originally aimed at ensuring that all religious communities were equally represented, received much international praise for its ability to overcome diversity. However, the high number of decision-makers has made it impossible to fulfil the basic government responsibilities such as providing clean water, access to electricity or simply regulating the economic system, as each seek to advance their personal interests and maintain power. In reality, the power-sharing system hides a political system with autocratic features, political repression and opaque elections.

From political gridlock to corruption, it has become incredibly hard for people to believe in justice and accountability through the traditional mechanisms provided by the state such as bringing a case before a court. This has caused some victims to take to the streets holding nooses and claiming that killing politicians is their only self-defence. When a state cannot protect its citizens, violence becomes an anticipated social reaction and another characteristic of a failed state.

As many of the president’s relatives are also in power, this leaves space to assume that his refusal to form a competent government is to buy time for his son in law, and former Minister of Foreign Affairs and Emigrants, to become the next president – putting personal gains above public service in times of urgent need for solutions. This in turn only exacerbates nepotism and political instability.

Lebanon is one of the world’s most indebted countries and in March last year defaulted on its debt. The financial crisis is partly the result of a carefully orchestrated Ponzi-scheme, combined with government incompetence and embezzlement operations.

While politicians have so far relied on the tourism industry, along with foreign aid and remittances from the diaspora to keep the economy afloat, the lack of a stable source of revenue will lead businesses to shut down, and in turn limit tax revenues and undermine foreign investment. Such a vicious cycle of debt and economic crisis puts Lebanon on the path to failure. With the risk to lose $20m a month due to a highly volatile exchange rate, the United Nations’ financial aid may be worthless.

Furthermore, the country is at the centre of geopolitical tensions. Shortly after the blast, the President of France, under which Lebanon was a protectorate, exercised pressure on the Lebanese president to form a government within days. Yet, more than 304 days later, the president refused two cabinet proposals and an old prime minister was re-nominated.

The leader of Iran-backed Hezbollah also recently announced that any missing fuel or medicine could be supplied by Iran.

Fuel supplies from Iran could mean additional sanctions on politicians and reinforced tensions between US-backed Israel and Iran who use Lebanon as their chessboard. While Iran-backed Hezbollah’s increasing influence has been perceived as a threat to the country’s independence by many, others have seen it as the only solution to the crisis.

These constant interferences raise questions on whether Lebanon will ever be able to achieve full control over its territory, again putting Lebanon on the path of a failed state.

Any clock with hands frozen requires a new battery to provide power. Lebanon’s political clock has been stuck in time for the past 50 years. The recent resignation of prime minister, Saad El Hariri, was not the first, nor the nomination of the new prime minister Najib Mikati.

The country needs new power urgently: a new competent, transparent and functioning government to lift it from the rubble – one that looks above its own personal interests.

By remaining in power for 30 years and focusing on sharing power only, Lebanese politicians have destroyed the nation and gotten away with murder, nepotism and corruption. Acknowledging that is a necessary step to preventing the country from officially becoming a failed state.

For anyone wishing to support the humanitarian response on the ground, financially or through other means, take a look at this website and the following list of local NGOs that support the most vulnerable populations affected by the explosion and use the hashtag #TalkaboutLebanon on social media platforms.

Melanie Anne Cremona is a Lebanese-Greek alumna of the Blavatnik School of Government (MPP 2019) and Saïd-Foundation Oxford Scholar. Prior to joining the university, she worked as a Consultant for the United Nations in Geneva where she designed high-profile capacity-building projects for governments on topics related to multilateral diplomacy.

Photo: A man walks into his store completely shattered by the blast. On the wall to his left, hangs a flag of Lebanon and on the wall to his right, is a painted image of a hanged politician. Credit: Marwan Tahtah.