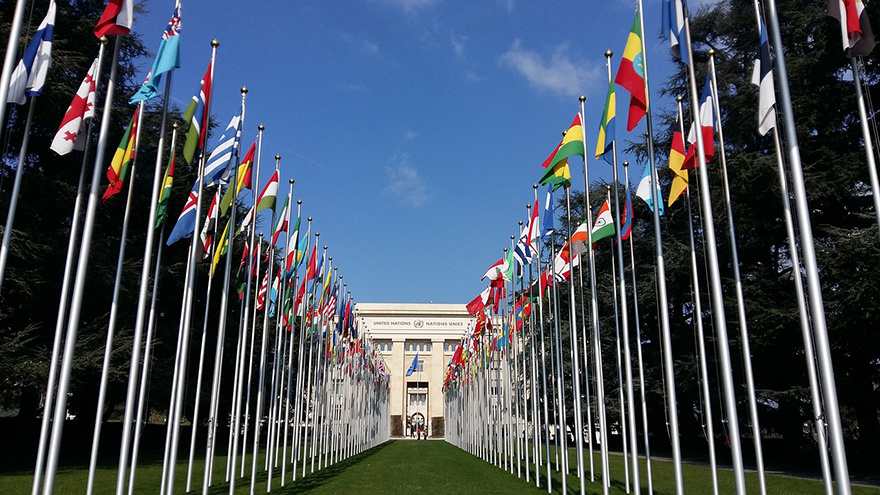 The changing scene of global trade

After graduating from high school, I spent the summer of 2011 at the Université de Fribourg in Switzerland. I visited international organisations, interacted with international experts and senior officials, learned about trade and advocacy, and developed an understanding of the role of international organisations in solving global problems – as well as the systemic challenges and weaknesses of such organisations. Since then, it has become obvious that the management of global trade systems needs to be radically rethought – yet, at the time, the glimpse of hope for the potential positive impact of these organisations was powerful.

Almost a decade has passed since my visit, and I still recall the awe of walking into the William Rappard Room, also known as the Council Room, at the World Trade Organization (WTO). The architect Ugo Brunoni – also known for the spectacular sphere-like Église de la Sainte-Trinité in the centre of Geneva – designed the room beautifully. It was built to provide a large-scale meeting area for WTO member countries, and like every other student in my programme, the first thing I did was to look out for my country’s seat – the Saudi seat. We spent that day listening to WTO officials discuss their mandates and challenges. I vividly remember a WTO staff member describing the Banana Trade Dispute, which sounded surprisingly complex to my eighteen-year-old self.

The WTO has extra roles to play nowadays – from facilitating the transformation to a global digital economy, to playing a role in the realisation of the United Nations’ Sustainable Development Goals. In the context of the COVID-19 pandemic, an important priority is to keep critical supply chains for essential goods – including medical supplies, food products, and ICT goods and services – open and functioning. Furthermore, the WTO must balance these short-term actions with its long-term goals.

The next WTO Director General

In November 2020, a new WTO Director-General (DG) will be appointed. The new leadership could contribute to galvanising collective action on the shared concerns of member states as they grapple with COVID-19 and its aftermath. To understand what is required from the next WTO DG, it is important to recognise the most pressing concerns facing the trade community today. The European University Institute (EUI Research Repository) ran a recent survey of the trade community regarding the priorities confronting the next WTO DG. Around 800 responses were received for most of the survey questions. To better understand the results, we can categorise findings into two categories: first, the preferred characteristics of the next DG; and second, the stakeholders’ priorities for the WTO.

The preferences and priorities of the trade community

There is firm agreement on desirable professional attributes
for the next DG. Respondents to the survey gave the most significant weight to
management experience, followed by political experience. Moreover, the majority
of respondents agree that the selection of the next DG should be purely based
on expertise and competence. It is less of a priority to respondents to rotate
between a developed and a developing country national. Respondents also accord
less support to the notion that the DG should not be from one of the three most
considerable trading powers such as the EU or China. There is also a strong
agreement on the new DG having personal connections and recent professional
experience with three types of players: 1) international organisations; 2) the
capitals of the most considerable trade powers (Beijing, Brussels, Tokyo and
Washington DC); and 3) international business.

The highest priority
area confronting the next DG is addressing the dispute settlement crisis. There
is a distinction between government respondents based in Geneva and respondents
based in capital cities on how to go about trade dispute settlement, with
Geneva giving a lower rank order to discussion on reforming the dispute
settlement system and attaching a very high priority to reinstating the appellate
body (AP). Other priorities for WTO stakeholders include improving compliance
with notification obligations; clearing up differences on special and
differential treatment; and strengthening the policy monitoring process.

Today, COVID-19 has accelerated the digitalisation of organisations globally. The results of the survey of WTO stakeholders suggest agreement on more use of video conferencing. This includes making decisions through meetings that involve the participation of officials via video conferencing facilities. The result signifies agreement on making use of such technology a standard option for WTO meetings. Perhaps if I were eighteen years old today, I could have expected a virtual tour of the WTO.

The WTO hasn’t been refreshed in a long time. Now is the
time to rejuvenate, so the institution is fit to support the post-COVID-19
global economy. There are eight candidates nominated to succeed Roberto Azevêdo
for the post of WTO Director-General.

His Excellency Mohammed Al-Tuwaijri, Saudi Arabia’s nominee, has a profile that makes him unique among candidates. His managerial background spans across borders and sectors, with experience leading international financial institutions, such as HSBC, in the Middle East. He also holds a deep understanding of trade and global capital flow and, having served as Minister of Economy and Planning of Saudi Arabia (2017–20), brings the perspective of both policymakers as well as traders. During his time in this role, Saudi Arabia witnessed a major socioeconomic transformation, during which Al-Tuwaijri contributed to the establishment of a delivery unit. This unit is in charge of ensuring progress, measuring performance and spotting gaps in programme delivery.

One of the most critical tasks for the next DG is to encourage members to explore how different elements of institutional reform can help address the dispute settlement conflict. With his vision to enhance WTO processes on negotiations, dispute settlement and monitoring, Al-Tuwaijri might bring the leadership and management style that is needed to revive the WTO.

While the question of
who will lead the WTO is vital, what is even more important is the commitment
of global leaders to work collectively across trade forums to build a sustainable
and equitable world. In today’s unprecedented times, the trade community must
work collaboratively to balance solving short-term COVID-19-related issues with
long-term development aspiration.

Lama Khaiyat (MPP 2016) is an alumna of the Blavatnik School of Government. She is the founder of Awtada, a boutique Strategy and Public Policy advisory firm based in Saudi Arabia. The views expressed in this article are purely personal.