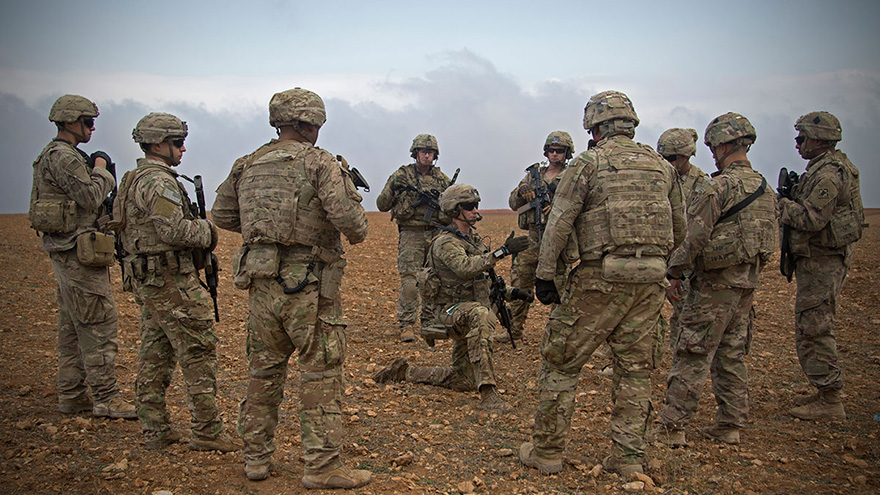 Donald Trump’s pledge to withdraw US ground troops from Syria and Afghanistan has become one of the most controversial foreign policy decisions of his presidency. The political backlash following Trump’s abrupt announcement to immediately remove all 2,000 troops from Syria last December has caused a series of partial reversals, with the latest calling for the withdrawal of 1,600 troops in the coming months. Meanwhile, plans to pull out half, and within five years possibly all, of the roughly 14,000 troops currently stationed in Afghanistan have been pinned to the uncertain fate of ongoing US peace talks with the Taliban.

Although Trump’s desired troop withdrawals may not exactly come as a surprise, his unilateral decision – apparently made without consulting US generals or regional allies – has contributed to the prevailing view that the president is acting on his “non-interventionist impulse” to retreat from the Middle East. But continuing controversy over the timing and scale of troop withdrawals obscures the aggressive steps Trump has taken to vastly expand US military power in the Middle East and reconfigure how it uses lethal force.

Since taking office Trump has presided over a record increase in US military spending. In fiscal years 2017-19 he added a total of $133 billion to the projected defence budgets, representing a 23 percent increase. This rising trend is likely to continue into fiscal year 2020, with the Trump administration preparing to set aside $174 billion of its $750 billion budget proposal for Overseas Contingency Operations – a fund that would allow the administration to maintain high levels of military spending without violating a 2011 law aimed at preventing such spending from contributing to the federal deficit.

The planned drawdown in the number of US troops in Syria comes after Trump sharply increased it, rightly conjuring fears of “mission creep” – to expand the war on ISIS to war with Iran without congressional authorisation. Despite his repeated campaign promises to “get out” of Afghanistan, Trump has followed in the footsteps of predecessors George W. Bush and Barack Obama by deepening US military involvement in the 18-year war, ordering a troop surge in 2017 and bringing the number of forces to about 14,000 personnel. As Chatham House’s Micah Zenko has observed, under Trump the overall number of troops deployed to the Middle East has grown by 33 percent (see the available data here). And the number of Pentagon contractors that supplement US forces has increased by 15 percent in the last year alone.

Notwithstanding impending troop reductions, the Trump administration appears to be increasing US military presence elsewhere in the region. On January 13, the US and Qatar signed a memorandum of understanding for the expansion of Al-Udeid Air Base, which serves as one of the largest hubs for US military operations in the region. Moreover, the administration reportedly intends to expand Muwaffaq Salti Air Base, which is located near Jordan’s border with Syria and Iraq and could potentially serve as a base for cross-border operations. Much to the chagrin of Iraq’s president and lawmakers, Trump has also publicly broached his desire to potentially redirect US troops from Syria to Iraq to “watch” Iran.

To be sure, any withdrawal of ground troops from Syria and Afghanistan would not necessarily signal an end to America’s “endless wars,” but rather their transformation: a shift from large-scale conventional warfare to a relatively “light footprint” in the Middle East. This shift would perpetuate and expand on the counterterrorism strategy adopted by President Obama, which effectively normalised the use of drone strikes in the Middle East.

The Trump administration has loosened Obama-era rules governing the use of drones, eliminating the requirement that targets pose a “continuing and imminent threat” to the United States. And Trump has delegated greater authority to the Pentagon and CIA to make targeting decisions without executive approval – a move that erodes transparency and accountability while expanding the pace of operations.

These changes have coincided with an unprecedented number of airstrikes (manned and unmanned) in both declared and undeclared war zones. In Iraq and Syria, the US-led coalition is believed to have conducted nearly 12,000 airstrikes in 2017, resulting in an estimated 4,000 to 6,000 civilian casualties – a 215 percent increase from the previous year, according to the Airwars watchdog group. In Afghanistan, the US has conducted nearly 9,600 airstrikes in the past two years, a level of activity not seen since the 2010-11 surge under Obama. In 2017, Trump also launched 161 strikes in Yemen and Somalia, more than tripling the number carried out by Obama the year before, according to the Bureau of Investigative Journalism.

In addition, the Trump administration’s counterterrorism strategy exhibits a greater reliance on special operations forces, doubling down on the approach inherited from Obama and markedly increasing the frequency and geographic scope of overseas deployments. In his first year, Trump deployed special forces to 149 countries – equivalent to three quarters of the world – an increase from the previous year that saw deployments to 138 countries. Nearly ten percent of the 70,000 forces that comprise the US Special Operations Command are deployed every single day on missions shrouded in secrecy.

While Trump’s
decision to pull out troops from the Middle East has defied Washington’s
foreign policy establishment and blindsided allies, concerns about an all-out American
retreat are unfounded. The near-universal outcry to his announcement might
point to the militarised
mentality that dominates Washington and binds both political
parties, as evidenced by the rare bipartisan
rebuke to the planned troop withdrawals. But Trump’s
“America First” rhetoric belies his expansion of the military and demonstrated
willingness to use force – with substantially less transparency and
accountability than before. And that should be most concerning of all.

Nima Gerami is a Visiting Scholar at the Blavatnik School of Government, University of Oxford and works closely with the Oxford Institute for Ethics, Law and Armed Conflict based at the School. He previously worked on Middle East policy issues at the Department of State and National Defense University in Washington, D.C.