On poverty of purpose and moral leadership 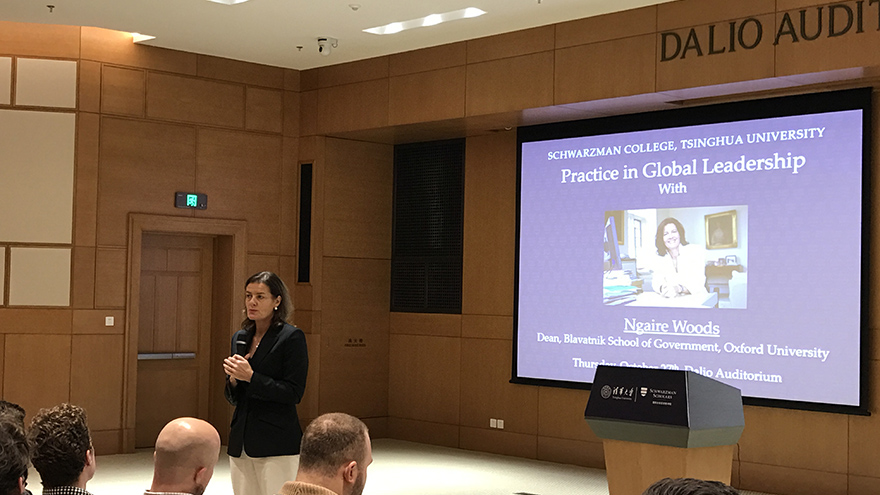 In the past week we had the pleasure to have the Blavatnik School of Government's Dean Ngaire Woods as a guest lecturer at Schwarzman College (Tsinghua University) sharing various lessons, from global governance issues to the challenges in current political leadership. Personally, the lectures brought back a lot of memories and reflections from my own time in Oxford and at the School, in particular raising poignant insights about what leadership and public service entails.


It would be an understatement to say that the politics of our current times are being increasingly challenged. Indeed, the past year in particular has seen a massive backlash in contemporary politics globally from the situation in the EU to the ongoing elections in the US, existing establishments have all received backlash in one form or another. Specifically, this has arisen from an erosion of trust in our leaders and a loss of faith in our system which has manifested itself in form of extremism stemmed from anger and frustration.

There are various drivers for this erosion of trust but perhaps one thing that stood out is seeing how the very leadership that we voted in to represent us has seemingly lost touch with what and whom they represent. These leaders, who are supposed to understand us best, have become the most distant and remote from us. What we are seeing is a leadership elite that results partly in entrenched elitism – being trapped to protect vested interests of the minority few at the costs of the public majority, and more intellectual elitism – which we saw in the UK’s EU referendum: a presumptive belief that they know what’s best for the public when they are actually so far removed from them. Simply put, our leaders have stopped listening and are quickly losing our trust.

Regaining this trust thus has to start with a rethinking of leadership and by extension of the purpose behind leadership. Specifically, it is imperative for leadership to be anchored in the values of “public service” rather than leadership for leadership’s sake. And nurturing this purpose requires developing moral leadership that stems from empathy, reflection and moral imagination.

“You have to let your heart break for it will change what you do with your optimism. So when you see a mother and her children suffering in another part of the world, don't look away. Look right at them. Let them break your heart, then let your empathy and your talents help you make a difference in the lives of others.” – Melinda Gates


That our leadership is listening less and less may well be because modern leadership has become about finding one’s authentic self which has resulted in leaders focusing more on oneself instead of on the community that one serves.

The best way to start listening again is with empathy and hearts, because by shifting their starting point away from themselves and fully immersing in where their community lies, that’s where leaders are not just reminded of who they are serving but also fully embrace the challenges and limitations faced by their communities on the ground. It’s only when our hearts are broken that we truly hear and feel what our constituents are telling us and what we need to do and what we can do to make change happen for them.

"Nothing comes to my desk that is perfectly solvable. Otherwise, someone else would have solved it. So you wind up dealing with probabilities.” – Barack Obama


Even with our hearts broken, it isn’t always easy to know what the right thing to do is. The fact is as with various social issues, public policy and leadership is often about trade-offs, where every decision made is also effectively about the decisions that you won’t get to make especially given multiple goals and constraints.

The key thus lies in developing a habit of continued questioning and. Every decision can be viewed as an opportunity to develop that culture of rationalizing and thinking – including understanding on whose behalf they are making a decision for, who are those who will be affected by the decision and who is it that they must be serving. Part of this also involves being impartial in one’s thinking and ensures that leaders act fairly, which is hugely critical for trust. It is only through this constant process that keeps them grounded on the issues and offers clarity in both their priorities as well as where their red lines are.

“It thrives on moral imagination: the humility to see the world as it is, and the audacity to imagine the world as it could be. It’s having the ambition to learn at the edge, the wisdom to admit failure, and the courage to start again… It’s leadership that rejects complacency, breaks through bureaucracy, and challenges corruption.” – Acumen Fund Manifesto


The heart of moral imagination lies in having both the humility and audacity to drive change forward in spite of the roadblocks along the way. It’s always easy to be entrenched in existing systems and energy can be devoured by circumventing bureaucracies or practical political realities, diverting attention away from the bigger purpose of service. A friend of mine who used to work for the UN puts it best by saying “it’s like focusing to win the daily battle internally, but losing the war externally”.

Moral imagination thus means having the openness to learn from failures and to appreciate those political realities but also having the courage and grit to continually create the change that we want to see. The best way to navigate bureaucracy is to achieve results and impact bit by bit. To that end, it’s always helpful to ask “who else has tried this and why didn’t it work?” and continually develop that habit of learning and hard-edged hope for impact.

Finally, start by thinking – what do we want to do?

Too much of our politics today has suffered from leadership with a poverty of purpose that has eroded our trust and faith in public leadership. It’s only by refocusing the discourse on a leadership that begins with purpose that allows us to rebuild the trust that’s deeply missing in our communities today. So to all the aspiring young leaders, ask yourselves not what you want to become, but what is it that you want to do and for whom do you want to do it – because only a purpose motivated by that is worth fighting for.

Alexander Chan is an alumnus of the Blavatnik School of Government (MPP Class of 2013) from Hong Kong and is currently a Schwarzman Scholar at Tsinghua University.
Public sector Democracy and politics
...
Integrity