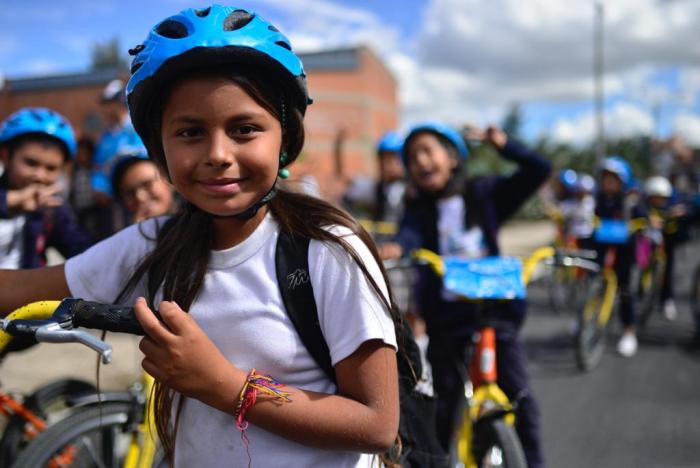 One of the principal concerns for Enrique Peñalosa when he started his second term as mayor of Bogotá in January 2016 was how to make it a better city for women, and particularly for young women. The statistics revealed a bleak reality: 5.8% of young women were poor according to the Multidimensional Poverty Index; per every 100,000 women there were 67 assassinations and 49 sexual abuse cases were reported, and there was a very high number of teenage pregnancies: 48.6 per 1,000 girls between 15 and 19 years of age.

This situation meant that a broad-based approach was necessary to make Bogotá a happier, safer and more just city for young women.
We needed to implement policies from every sector to fully contribute towards
structural change. In our government plan, we included result-oriented goals such
as reducing the number of teenage pregnancies, reducing multi-dimensional
poverty, drastically reducing violence against women and girls, and closing the
gap between the number of hours of household chores performed by men and women.
Additionally, we set out to bolster the gender approach, especially in urban planning
and public transport.


This last objective is deeply related to guaranteeing women’s right to
the city. In 2017, 26% of women over 15 years of age claimed not to leave their
houses at night because they feared they could be attacked on the street and
the number of women that claimed they felt unsafe in public transport was unacceptably
high. We needed to rethink Bogotá and put women at the centre, promoting
inclusivity and safety. All efforts to guarantee women’s right to the city are
important and an ethical imperative for a democratic local government. For me,
as Secretary for Women, and for the team I lead, this meant broadening the
focus of our work and being profoundly involved in the traditionally male-led mobility
and urban planning sectors. Luckily, we found in those Secretariats and in the
Security Secretariat great individuals who understood our concerns and the importance
of including a gender approach.


To achieve our goal, we created ‘Me Muevo Segura’ (‘I move safely’),
an umbrella programme that groups several strategies to improve women’s
experience on public transport and in public spaces. As an initial measure we
created a protocol for the prevention, attention and sanction of violence
against women in public space. This was a complicated task as it involved
getting a variety of actors on board – the Police, General Attorney’s Office, the
public transport company (Transmilenio), the Security Secretariat and the
Mobility Secretariat. Additionally, with the Security Secretary we faced the
challenge of creating the first ever mechanism to support victims of sexual
violence cases occurring in public transport and public space.


It was clear that we needed to do more in terms of prevention and promote
a cultural shift away from machismo (a
concept that encapsulates many aspects of Latin American male behaviour, and
that often reflects male power and female subservience), often at the core of
sexual violence and harassment. We devised and implemented the first ever
campaign to challenge sexism, called ‘Bogotá
Libre de Machismo’ (‘Bogotá free from machismo’),
and soon we will launch a large ‘Me Muevo
Segura’ campaign to raise awareness of harassment in public spaces.


However, these efforts are long-term changes and young women needed immediate
options. So we decided to focus on the bicycle as an empowerment tool, as well
as an efficient mean of sustainable transport. Bogotá boasts over 560km of
bicycle paths and approximately 800,000 bicycle journeys are made every day –
around 22% of which by women. In order to boost the use of the bicycle among
women, we are hosting the first ever international Congress 50–50 More Women on Bicycles, which will convene
representatives of five countries and over 450 Colombian women. Additionally,
we carried out a survey to identify the factors that dissuade women from
choosing the bicycle as their preferred means of transport; the results showed
that safety issues and sexual harassment were the among the main concerns. Therefore,
within the ‘Me Muevo Segura’ programme,
we set out to analyse streets and cycle paths and improve the most unsafe
areas.


The project was selected among the top 10 best initiatives by the
Transformative Urban Mobility Initiative (TUMI), which allowed us to finance it
and to generate data to build evidence-based interventions and policy. The
project involved gathering geo-referenced visual data from 16,145 km of road
network (almost the full network) and 527 km of bicycle paths in 19 of the 20
boroughs that constitute the District of Bogotá. Additionally, over 14,300 women
were surveyed on their perceptions of night safety in the city. The index
generated through these results, and based on eight variables of the UN Women
Safe Cities and Safe Public Spaces programme, provided information on the
locations and factors that determine why women feel unsafe in specific areas of
the city. Once the information is analysed, it will be possible to make
informed decisions that will improve security and urban planning in the city. For
example, we are now able to establish the relationship between lighting and
safety in a given area, and identify common factors in areas with the highest
occurrence of sexual harassment cases.


After three and a half years of implementing an articulated and
cross-sectoral policy, we can say that young women in Bogotá are better off now
than they were in 2015. The figures speak for themselves: a 21% decrease in the
number of assassinations, 29% decrease in teenage pregnancies, 14% decrease in the
number of sexual abuse cases, and 33% decrease in multidimensional poverty. In
addition, among women, practising sport has increased by 46% and bicycle use
has increased by 29%; the number of women attending the rock festival Rock al Parque has increased by 81%; and
35% more women now find parks safe and well-equipped. More work remains to be
done, but these statistics prove that we are on the right track to create a
safer, happier Bogotá for young women, and this is possible only through gender
mainstreaming.


Ángela Beatriz Anzola De Toro is District Secretary for Women in the District of Bogotá, Colombia. She is also an alumna of the Master of Public Policy at the Blavatnik School (MPP 2014).