How should we imagine war? 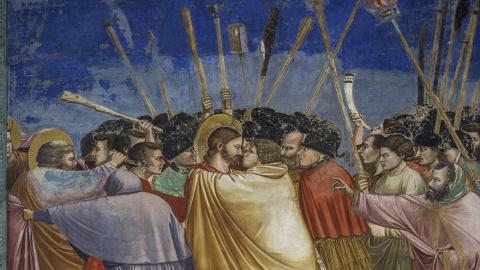 Most diplomats and
policymakers who decide their nation’s security policy or shape UN resolutions
in New York and Geneva on conflicts in Syria, Yemen or Mali have never lived through
a war, or seen one close-up. Like most of us, they must imagine war. They must
see it in their mind’s eye after watching fragments of war in the media and reading
official reports.

So how should policymakers
imagine war? How should they paint a picture of war in their minds so that it
becomes a realistic field of policy to work on in multilateral diplomacy? And,
can we be sure that the way policymakers imagine war in New York and Geneva is
the same way that their political leaders are imagining it in their
capitals?

The American scholar, Jennifer Gosetti-Ferencei, has written a wonderful book about imagination. She traces the role played by human imagination in continuously re-describing the world. In one powerful section, she discusses the imaginative development of western European painting and its various turns from the figurative, through impressionism towards abstraction.

This is the
politically correct way to imagine war in public discourse, and the UN Security
Council has also committed to seeing war in this way in recent years. Yet, in
private, it seems clear that most policymakers continue to imagine war more
simply as an inevitable, unpredictable and sometimes necessary way to achieve
political goals.

Many states also use their imagination today to pretend they are not at war. They ask others to believe that they are really doing something else like counter-terrorism, cyber operations, training and supply, special operations, policing urban violence or state-building. This resort to make believe and euphemism in formal security policy asks that their violence be modestly veiled and imagined as something other than war. This is the deployment of what Wittgenstein called our imaginative capacity for “seeing as”, which Gosetti-Ferencei explains so well. Our ability to see clouds as castles; patterns in the stars as bears and belts, and war as peace.

Security policy could benefit
from a clearer appreciation of how war is politically imagined so differently
by politicians, diplomats, human rights activists and humanitarians. This is especially
important when war is seldom honestly discussed in the political arena. The
imaginative of development of western painting offers a good way in.

War as a humanitarian problem

The humanitarian imagination
eagerly pursues a highly figurative view of war. Hundreds of humanitarian
lawyers and policymakers believe we can describe war in minute human detail and
paint it with precision. We can see it exactly as it is in rich descriptions of
human behaviour and suffering that involves actions that are cruel and kind, lawful
and unlawful.

Like the great
painters of the Renaissance, who strove to imitate every detail of nature and
human life on their canvases, humanitarian policymakers believe we can put war
in perspective and truly describe it on paper, so bringing order, light and
shade to their demands for urgent policymaking.

Like Giotto and his
successors, this figurative view of war focuses on “object constancy” to
imagine that war is a fixed landscape of actors and behaviours from which we
can create a precise tableau with fine brushes and a range of colour, and paint
war exactly as it is.

Humanitarian policy also
bring different “lenses” into play to help them see the detail of war more
clearly as they paint – a gender lens, a protection lens, a conduct of
hostilities lens, a nexus lens – so that every form of violence is captured and
becomes a corresponding opportunity for sound policy and law to ban it or
reduce it.

The figurative commitment
insists we can see war perfectly clearly and so describe it and prescribe it.
We can master war by using rules, laws, sociology, fact-finding, policies,
courts and humanitarian aid as our pigments and our paints, and we then re-order
it bit by bit to protect people and prevent excessive damage.

In short,
humanitarians hold that war can be imagined and seen all too clearly. This
means we can re-engineer war with a sort of Rawlsian order, complete with areas
of overlapping consensus. All it needs is for others to join in the project by imagining
war in the same way.

War as blurred beyond reason

Political
impressionists will tell you instead that war is wild. It is possible to
experience it but never to imagine it and understand it completely. There is no
object constancy in conflict. Everything is moving fast or obscured in Clausewitz’s
famous fog. Like Turner’s paintings of ships churning the sea in a mist, the
power of nature and machines means human beings can barely be held in view as
the currents, clouds and spray of war obscure both human purpose and the human person
from sustained analysis.

Once war starts, political
impressionists explain, it lasts a long time and is intrinsically confused. It
is not usually clear what war is about when it begins, and both cause and
rationale change constantly as a war evolves over years and widens to include
new powers and new grievances, initially unforeseen. Monet’s Japanese bridge may
look fixed and glorious as a blurry set piece but it is, of course, just paint
and not really a bridge at all. Because the bridge kept changing, he also had
to keep painting it again and again. Monet’s view is an image of the world in
flux, and not a view of the world itself.

The same can be said
for long policy reports on war, prepared for diplomats and policymakers with
carefully numbered paragraphs. They are glimpses of war from particular places,
not the war itself, which can never be seen in its entirety and is changing all
the time. Thus, political impressionists hold that war is beyond the power of
human reason and we should not expect to order it or end it reasonably.

Abstract painters
turned their imagination towards a simpler view of the world. Blocks of
powerful colour in Malevich and Rothko; large triangles and circles challenging
each other in Kandinsky, and a rich spattering of different colours in the
large canvasses of Jackson Pollock. These canvases of solid shapes and striking
colour seem best to capture an underlying view of reality. When you cannot see the
world all at once in perfect detail, you can at least sense and respect the deep
forms within it.

The abstract imagining
of war is the most realist and the least human-centric of all. It says that war
is about solid blocks of power, colour and shade that compete over the global canvas
to control it. This politically simple view of war is one that many people hold,
even if they cannot always say they do at the United Nations. It sees war inevitably
arising when different shapes of solid power make new patterns in the world
like China, India, Russia, South East Asia, the US, the EU, the Arctic and
Outer Space today. These blocs of power and space incorporate, accommodate or
challenge one another and, in the process, make either friends or enemies. The
process is profound, unstoppable and hard to humanise at the individual level
on a political canvas.

This abstract view is the
geostrategic view of war that is beginning to dominate political imagination once
again in our contested multipolar world. As major powers prepare for
peer-to-peer warfare once again, we can expect to hear the policy and
diplomatic imagining of war begin to sound much less humanitarian and much more
solidly political.

If this is the case, then it will be especially important to retain a humanitarian imagining of war alongside this geostrategic view. Citizens around the world must encourage policymakers to imagine people as well as power blocs when they conceive their strategies of war. War cannot be imagined only politically when it has so many people in it.

The School Conflict and stability
...
Integrity