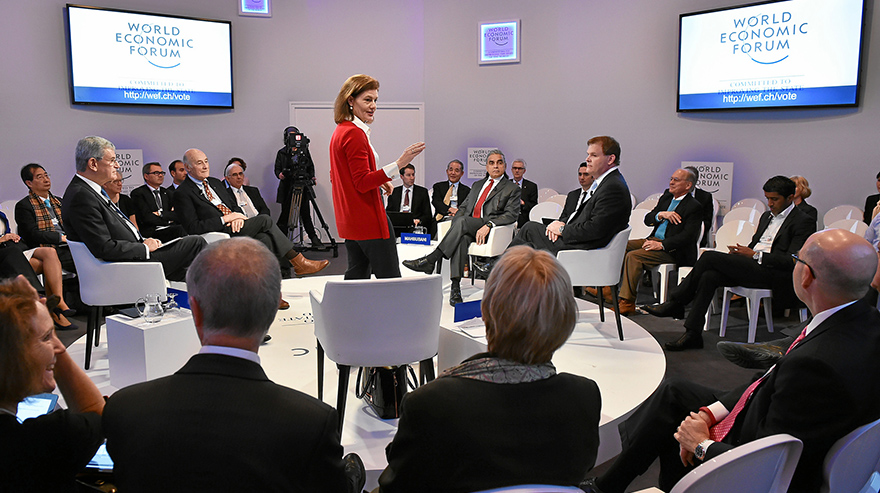 What is the message from the World Economic Forum in Switzerland? Our Dean Ngaire Woods reports from the thick of debate on global affairs.

Davos attracts some unusual groupies. This year the appearance of rapper will.i.am and ‘Happy’ Pharrell Williams caused a collective rush of pin-stripe suits urgently determined to get a selfie with a star. Personally, I managed to quench the urge to prove to my teenage children that Davos is cool — and got cool by tramping around in the snow instead.

Davos brings a couple of thousand people together who seek the chance to engage with one another — whether for three minutes or in an organised discussion. And at its best, Davos raises the bar — it makes people aware that they could do a little more good in the world, and that there are rewards to doing good. As Dean of the Blavatnik School of Government at Oxford, I know that this bar-raising for everyone — business, journalists, governments and NGOs — is important for making government better around the world.

What did Davos say this year about the global economy? Davos was humming with a determined (possibly delusional) optimism about the global economy. The USA will grow, China will hold, oil prices will both stay cheaper (fostering growth) and rise enough not to cause a crisis for producers, and the EU is on track to do better. I like optimism. But I can’t bring myself to forget that at Davos last year we collectively managed to remain oblivious to the possibilities of an oil price crash, the emergence of the ‘Islamic State’ revolutionaries in the Middle East, and war in the Ukraine. It’s definitely not a crystal ball.

But it is a place to hear a wide range of views if you listen hard. In a private breakfast discussion chaired brilliantly by German Gref, head of Russian bank Sberbank, analysts debate Russia’s economic policy. I had heard Russian prime minister Dmitry Medvedev announce his new economic plan at the Gaidar Forum in Moscow the week before Davos, and it was a strikingly protectionist call to ensure that ‘Russian business wins’.

This is understandable in hard times, but unlikely to succeed. While politics and economic crisis are pressing Russia to look inwards, it urgently needs to reach out to the rest of the world for investment, for a workforce, and for resolving geopolitical pressures. Here at the Blavatnik School of Government we’re going to think harder about how we can help.

The Open Forum is a wonderful innovation. In a high-school hall outside the iron-ring security of the Davos meeting, the public (students, activists, Swiss townsfolk) joined me in debating whether democracy is at an end. You can watch the panel discussion in full at the end of this article.

It was humbling to hear the panellists. Ali Tarhouni was stripped of his Libyan citizenship and sentenced to death in the 1980s and has still kept fighting for democracy in Libya, where he is now president of the constitutional assembly in a very fractured transition. Vitali Klitschko, one of the longest-reigning heavyweight boxing champions of all time and a deeply thoughtful and determined mayor of Kiev, is struggling to improve governance in the midst of Ukraine’s conflict. José Ángel Gurría, head of the OECD, spoke passionately about the need for democracies to deal with inequality. Wang Hui, professor of intellectual history at Beijing’s Tsinghua University, reminded us of China’s concerns and history.

The public were split. One half were hugely optimistic about democracy — they were mainly Swiss. The rest had more questions.

Without doubt, my favourite quote of the whole week at Davos was Colorado’s Governor John Hickenlooper: ‘If you really want to persuade someone, listen harder.’ That for me is a great guide towards better government and global cooperation: listen harder to what people (including those you dislike or distrust) need, what they fear, and what they want. And listen equally hard to what has worked and is working, before presuming to impose a solution.

This piece first appeared in Oxford Today, the magazine for Oxford Alumni.