Can we shrink the car? 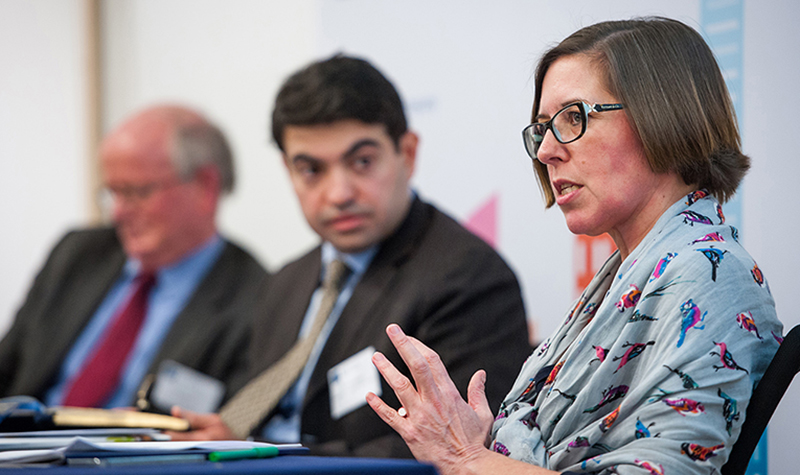 Peppered with questions and comments from the audience and lively, engaging discussion throughout, this deep dive parallel session about the future of public transport in cities was truly enjoyable.

The session was poised to be interesting and thought-provoking from the very beginning when Dr Atif Ansar, the chair for the session opened the floor for questions and comments, before handing over to the speakers. The audience, as is usual of a conference as stimulating as the Challenges of Government conference brought up some key, deeply insightful points that set the tone for the rest of the discussion. The main questions revolved around whether economic growth is enabling cities to ‘flourish’, and, in the present scenario of increasing growth and needs of cities, whether current methods of public transport can scale to effectively meet the demands of burgeoning cities.

David Banister, Professor of Transport Studies at the Transport Studies Unit of the University of Oxford spoke first. The key point raised by Prof. Banister was, ‘‘In order to meet the vision of a ‘city’, how can we make best use of the space available?’’ In a world where demand will far outstrip availability of transport, who owns this ‘space’? The notion of ‘space’ was juxtaposed with the car and for me, the most interesting thing that he elaborated upon was the car is a big part of the problem rather than the solution. ‘Can we shrink the car?’ was in his own words, a radical solution to the issue at hand as cars provide no financial incentive for public transport to develop and prevents alternative use of ‘space’ . His radical solution went one step further to ponder about whether we need to own cars in the first place. I found myself lingering with this thought, wondering about the feasibility of it in my country, India where the system of public transport in the big cities is bursting at the seams, stretched thin and absolutely unable to handle the demands of cities that seem to magically grow exponentially! Prof Banister also hearkened us to the very real but understated issue of public transport contributing significantly to the monster of climate change.

 We next heard Susan Claris (pictured above), Associate Director of ARUP, speak. The emphasis of her talk was on how crucial ‘walk’ is to the whole paradigm of public transport. More interestingly, the link between public transport and health was highlighted by her by focusing on the role of walking. Walking is a low-tech solution that improves physical and mental health apart from having the obvious environmental benefit of reducing pollution by becoming a key component of the public transport system of a city. She gave the example of dementia being the leading cause of death for women in Britain, and the strong links between physical activity and the lowering of dementia risk.

The floor was then open to audience comments on the best and worst cities. Copenhagen, Tokyo, Manchester, Freiburg and Singapore were among the best cities while Brasilia, Cairo and Bangalore led from the bottom. It was pointed out that in Copenhagen, a large segment of the population cycle more than once a week and there is a veritable normalization of cycling as a part of life. People see themselves as normal people, biking and going about their daily routines, and not as ‘cyclists’.  This brought us to the white elephant in the room –behavioral interventions are necessary to incentivize behavior patterns like cycling. Prof. David in a complete antithesis to conventional economist wisdom, declared that people are totally non-rational and it is imperative to engage with them if behavior change is the goal.

The key takeaways from this session were:

I left the session feeling suitably energized to chart a public transport policy strategy for India... but I soon realized then the key aspects that were missing from the discussions. The special challenges faced by developing countries were not touched upon adequately; cycling and walking forming a significant part of public transport in India seems to be eons away given that in most part of the country - footpaths don’t exist!

Urmila Pullat is an MPP student (class of 2014) at the Blavatnik School of Government.