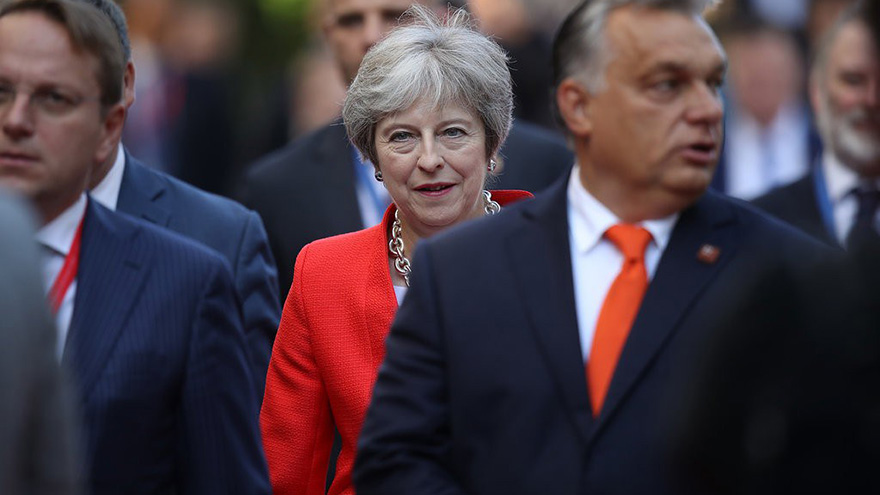 With the European Union’s latest extension of the United Kingdom’s membership in the bloc, onlookers around the world are right to wonder why the Brexit process has proved so intractable. The short answer is that the UK’s government and parliament are trying to achieve three incompatible goals: preserving the country’s territorial integrity, preventing the return of a hard border between Northern Ireland and the Republic of Ireland, and enabling the UK to strike its own trade deals.1

The British are finally confronting the fact that only two of these objectives can be met at any one time. This implies that there are three basic scenarios for moving ahead with Brexit.

The first scenario centres on a “free-trade union,” which would grant Britain autonomy over trade policy and territorial integrity in exchange for the return of a hard border in Ireland. Trade-policy autonomy requires that the UK leave both the EU customs union and the single market. In either case, customs and regulatory checks would have to be established at the border between Northern Ireland and the Republic of Ireland. Though some have suggested that new technologies could obviate the need for physical border checkpoints, no such technologies exist. Hence, a major risk in this scenario is that the return of a hard border would jeopardise the 1998 Good Friday Agreement, which ended decades of violence in Northern Ireland.

The second scenario would offer an answer to the Irish question. The UK could enjoy trade-policy autonomy without a hard border in Ireland by sacrificing territorial integrity. This would involve keeping Northern Ireland in the EU customs union and single market while establishing a border in the Irish Sea – that is, between Northern Ireland and Great Britain.

The problem with this arrangement is that different parts of the UK would have different trade rules and regulations. Not only would Unionists in Northern Ireland object to being separated from the rest of the UK – again, raising the risk of renewed conflict – but Scotland would probably demand its own closer relationship with the EU. And if the Scots decided to pursue another independence referendum, the entire UK could be at risk.

Under the third scenario, the UK could avoid the Irish question and preserve its territorial integrity, but would have to abandon the vision of “Global Britain” by remaining in both the customs union and single market. Under this scenario, there would be no meaningful autonomy over trade policy. This is the essence of the “Common Market 2.0” proposal that has been put before the House of Commons.

Following Norway, the UK could opt out of the Common Agricultural Policy and the Common Fisheries Policy, thereby reducing its EU budget contributions. But it would still have to permit significant migration from the EU – a key red line of the “Leave” camp. Likewise, Britain would still fall under the jurisdiction of the European Court of Justice, albeit indirectly.

Moreover, even a simple customs union with the EU – the option that has so far come closest to commanding a parliamentary majority – doesn’t resolve the Brexit trilemma. While it would grant the UK control over immigration, it would require new regulatory checks between Britain and the EU. It also means that Britain would be locked out of the single market in services, which constituted around 40% of British exports to the EU in 2017, accounting for a surplus of £28 billion ($36 billion).

The Brexit impossibility triangle makes clear why UK Prime Minister Theresa May’s withdrawal deal has been rejected by the House of Commons multiple times. As an exit treaty, it leaves open the details of the UK’s future relations with the European Union, but it does include a legally binding commitment (the “backstop”) to prevent the return of a hard border in Ireland. In the terms of the Brexit trilemma, May’s deal rules out the first scenario of a “free-trade union,” but leaves the inevitable choice between trade-policy autonomy and territorial integrity for the next stage of the Brexit negotiations. It is this ambiguity that worries many MPs.

For their part, hardline Brexiteers are determined to secure autonomy over trade policy, which means they would accept a border through the Irish Sea. But then Scotland would demand its own special arrangement vis-à-vis the EU, putting the UK on track for a major constitutional shakeup, and possibly dissolution. Avoiding this scenario means sacrificing autonomy over trade policy for the sake of the Good Friday Agreement and territorial integrity. But this would upset hardline Brexiteers and could split the Conservative Party, a risk Theresa May has been unwilling to take.

British leaders need to acknowledge that all Brexit scenarios involve tradeoffs, and the country urgently needs to hold a national debate to rank the electorate’s preferences. The choice is between one of the three Brexit scenarios and suspending the Brexit process altogether. Without a mature and frank discussion, the UK will continue to bear the costs of interminable uncertainty and indecisiveness.

But, of course, a proper debate requires effective leadership that highlights the choices and creates space for compromise. If the wounds of Brexit are ever to heal, voters will have to move past transactional, tribal politics and embrace leaders who are willing to reach out to the other side and speak honestly about policy tradeoffs. Only by working together will the UK arrive at an outcome that all can respect and live with.

This article was originally published by Project Syndicate on 12 April 2019.

Emily Jones is Associate Professor in Public Policy at the Blavatnik School of Government, University of Oxford.

Calum Miller is Associate Dean and Chief Operating Officer at the Blavatnik School of Government, University of Oxford.