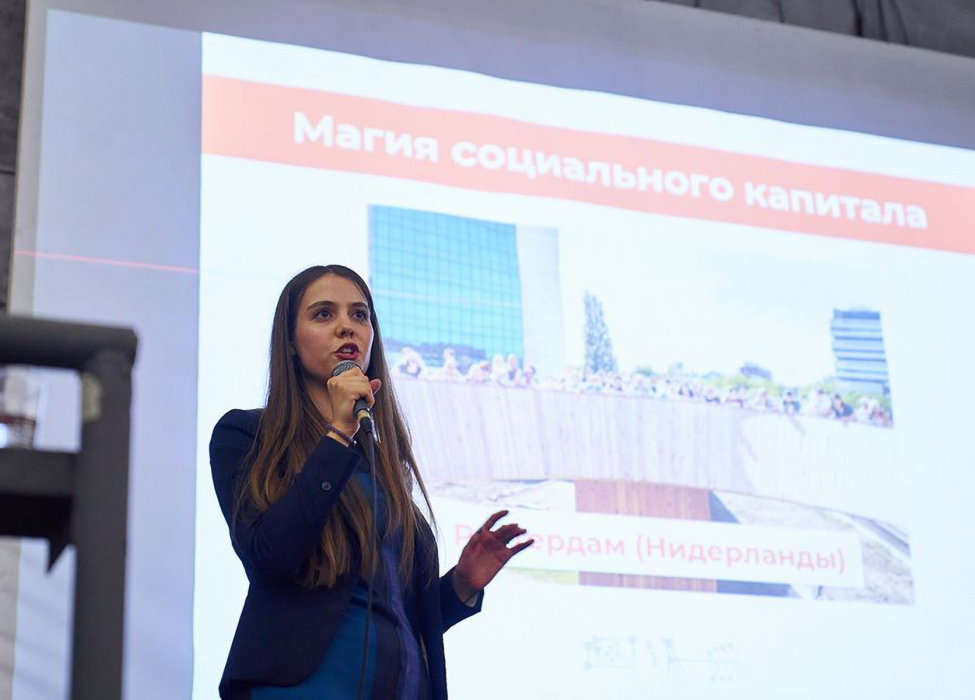 Vera Kichanova (MPP 2016) is a passionate advocate for the potential of cities: “They are places where social capital is created, and where goods, ideas and services are exchanged,” she says. “With urbanisation happening at rapid speed, we need to create a comprehensive, cross-sectoral vision for urban development.” As a policy researcher at Zaha Hadid Architects, she brings together the goals of engineers, economists and policymakers to create this shared vision.

“The future of innovation lies at the intersection of different disciplines. By bridging the divide between architecture and policy, I am working exactly at that intersection.”

Vera’s career at Zaha Hadid Architects began during the Master of Public Policy (MPP), when she undertook her summer project as a researcher on its Walkable London project. She carried out research and modelling for a proposed network of pedestrian routes and zones across the UK capital, and built relationships with local charities working on pedestrian safety, cycling and walking promotion, health and the environment. She extended her stay at the company to deliver an exhibition on the project, which was extended twice due to its popularity. Recognising the gap between architecture and policy during her summer project, Vera made the case for the creation of the in-house policy researcher role which she now occupies. She is also studying for a PhD in Political Economy at King’s College London, building on the economics foundation she developed during the MPP.

Vera’s year at the Blavatnik School left her well-equipped to understand the needs of public clients, who make up the majority of her work. Her projects cover an international client base, from the United Arab Emirates to China to Finland. This breadth requires Vera to quickly get to grips with policy issues, as well as deeper political and cultural contexts, to develop proposals that align with government strategies. “My favourite project so far was a proposal for the development of a concert hall in Yekaterinburg, Russia. I carried out research on the history of the city, heritage buildings in the area, and the strategy of the Russian Ministry of Culture to promote classical music.” Construction on the concert hall began in January 2020.

Vera regularly draws on skills she developed on the MPP, and in particular the Politics of Policymaking module.

“Learning how to write policy memos on the MPP was really valuable: when I brief designers and engineers at the beginning of a project, I need to be able to condense broad, deep research into concise information.”

Vera has been turning her attention to some of the most pressing challenges faced by the architecture sector, including sustainability demands and rapid urban growth. At Zaha Hadid Architects, she is developing databases on passive housing strategy – designing houses with reduced energy and water demands – and sustainable urban design, facilitating the development of evidence-based proposals that meet sustainability requirements. She has also published a policy paper advocating more flexible policy towards the development of micro-flats and co-living spaces in London; these types of accommodation, she argues, can cater to young urban professionals who are willing to sacrifice space in order to live close to the city centre.

It is this critical approach that drew Vera to the MPP in the first place. She initially considered a master’s in urban policy, but was deterred by the prescriptiveness of many of the programmes on offer: “I had seen urban renewal projects in Russia that were unsuccessful, even when neatly copied from other cities – there is no one-size-fits-all solution.”

“The MPP encourages you to address policy from a critical perspective and develop evidence-based solutions to challenges.”

Coming to Oxford was Vera’s first experience of studying outside Russia, and her first time living in an English-speaking country. She found the Blavatnik School to provide a welcoming community and immersed herself in university life, becoming president of the Hayek Society and secretary of the Ukrainian Society.

“The supportive atmosphere at the School and the social opportunities across the University far exceeded my expectations.”

As a Hill Foundation Scholar (see some external funding and scholarship options), Vera’s scholarship provided another avenue of support and community during her time in Oxford. “I still remember receiving the scholarship offer; it gave me final confirmation that I would be able to undertake the MPP.” Vera attends an annual reunion dinner in Oxford with fellow Hill Foundation Scholars, including Blavatnik School alumna Yulia Taranova (MPP 2012), who was part of the first MPP intake and is also completing a PhD at King’s College London. She has also stayed in contact with a number of her former classmates.

“At the Blavatnik School, you become part of a truly global community. It’s powerful to know that there is a worldwide network of people who I can reach out to for advice and support as I continue to build my profile as an urbanist.”

Vera was a Hill Foundation Scholar

See Vera in 2017 discuss what drew her to the Blavatnik School and the skills she gained from the MPP.