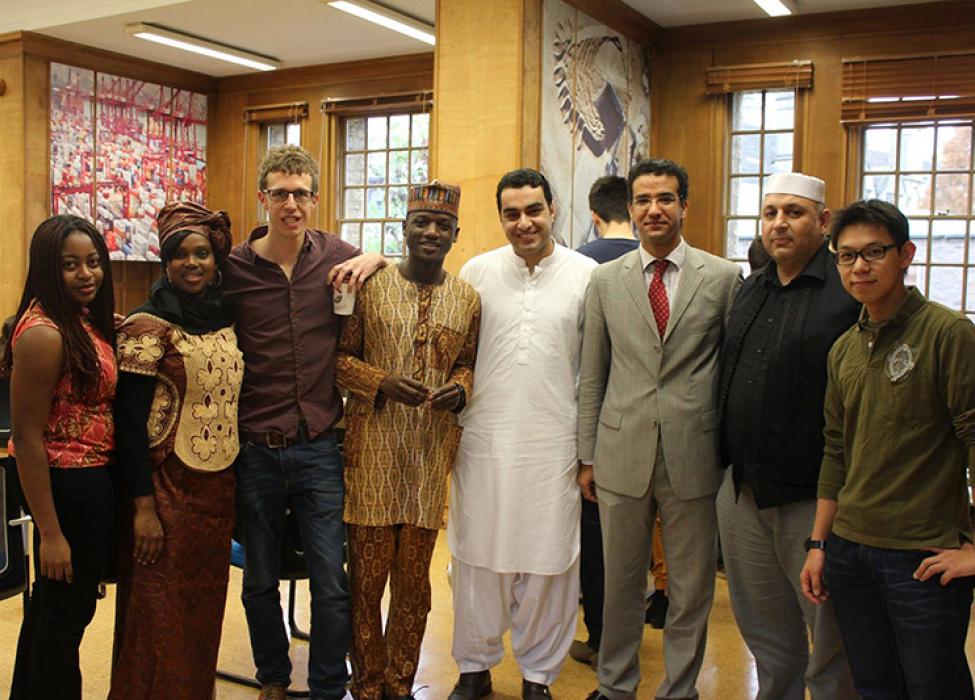 Rafiullah (5th from left) and classmates at a student social event

The road from a remote village in Pakistan to the Rhodes Scholarship and Oxford.

Only one Rhodes scholarship is awarded per year to a student from Pakistan. In 2013, the Rhodes Scholar from Pakistan is MPP student Rafiullah Kakar (MPP 2013). Rafiullah comes to Oxford from the Balochistan province of Pakistan. His village lies along the Pakistan-Afghanistan border in what is considered one of the most hostile parts of Balochistan, in an area rife with tribal feuds, drugs and religious violence.

From a family of 13 Rafiullah credits his older brothers, his family, and his regional background as his main motivation in working towards educational success. “I was the first person to go to college in my family. They have done everything for me and my younger siblings, paying for our early education and giving us was unlimited support. The more I realised about my family’s commitment to me and my background the more committed I became.”

Rafiullah has overcome many challenges in his educational career so far, and not the least was language. His early education was taught in Pashto and Urdu. He then gained a place at the top school in his region where the all the instruction was in English, a language he had barely started to learn. It was a challenging but transformative experience for Rafiullah. He explains: “I had just been learning A is for apple, B is for bus, and C is for cat, so that was a really tough and challenging time for me. I took 2-3 years to overcome the communication and language barrier and catch up with the other students, most of whom were from the great private schools where the medium of instruction was English. I regained momentum and was top of the class for the next 4-5 years.”

His successful schooling led to a place at Government College University (GCU) in Lahore, which he says: "transformed me intellectually and broadened my horizons". While there he won a Fulbright scholarship to study in the US for one semester which gave him new perspectives. “It was a brief one semester study but it was a very rich experience in terms of values. It really gave me a way to approach things from another perspective and to view my society from their vantage point. The one thing that struck me the most was that people are good everywhere. It is just the way that these governments operate internationally – they promote narrowly defined national interests. That was a good opportunity to help me shun my biases and prejudices, and it also helped the Americans I met to shun many of their biases and prejudices about us. I was a representative of my culture and the people.“

The Fulbright scholarship also opened his eyes to the idea of study abroad. “Before I went to the US I could never ever have thought that I would ever study abroad, forget about Oxford. No one from Balochistan has ever studied at Oxford and I could never have imagined it.”

Once he resolved to continue his education Rafiullah focused on winning the Rhodes Scholarship to enable his study.

“It was a tough challenge. I had a look at their criteria and what encouraged me was that they wanted all-rounders who excelled academically but also did co-curricular activities and sports, which is what I had been doing all along. I also wanted to add something more before the application process was announced, so I started writing on political issues. I published a research paper and I wrote for national newspapers and magazines, so by the time came to submit my scholarship application I had prepared a big CV.”

The work paid off and Rafiullah was awarded the Rhodes Scholarship and a place to study for the Master of Public Policy at the Blavatnik School of Government. He says, “I could never have imagined that I could come to Oxford. It is a great honor for me, my family and my region.”

Now at Oxford his focus is firmly on the demands of the MPP, though he is still managing time for a few extra activities. He recently won the elections to be Vice-President of the Oxford Pakistan Society. And he has one eye on the future; after the MPP Rafiullah plans to continue his education and study for a DPhil at Oxford.