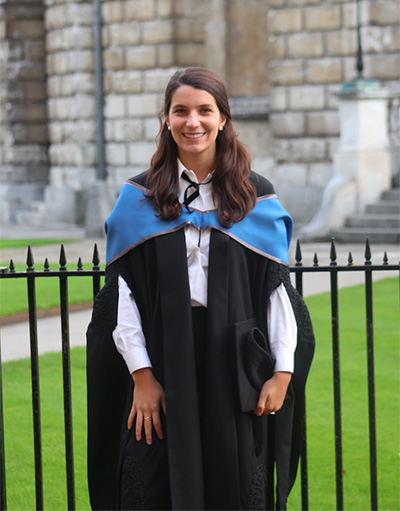 Megan Musilli (MPP 2017) joined the Blavatnik School of Government during a hiatus in her military training. Having studied Maths at the US Naval Academy, she came to Oxford on a Rhodes scholarship, and completed a Master’s degree in medical anthropology with a focus on women’s health issues in the military. After the MPP, she will attend medical school then return to the US Navy as a physician.

A university trip to Congress sparked the interest in public policy that would later bring her to the Blavatnik School.

“Sitting in front of the House Committee were the Surgeon Generals of the military services. I was fascinated because the military is controlled by citizens, but often I feel as if there’s a disconnect between what the military does and how that’s perceived by civilians. That’s very much related to public policy and links in with what we talk about here at the School. I became interested in economics because of the very large budget for military medicine, and politics, because the government’s budget for the military remains highly politicised.”

The MPP fits in well at this stage of Megan’s career, giving her insights into the decision-making process before she begins her practical medical training. “Being here now means that when I start medical school I’ll have a broader perspective, and I will be able to see earlier on where there are problems that I can address.” She hopes that the MPP will help her learn how to positively influence policymaking in the military, and support her aim of becoming a policymaker in the area of health within the military. “If policymakers are speaking a different language to the military, communication breaks down. I also hope to be actively involved in decision-making later in my career.”

However, Megan will not simply be putting the skills gained on hold after the course: she’ll be able to utilise them straightaway.

“In the military, you are both an officer and a physician, so you are also a leader in the traditional sense. You interpret and implement policy throughout your career.”

Megan has found a great deal of crossover with her professional experiences so far. “The military is a huge socialised system, so a lot of the modules we’ve taken so far have been very relevant. It’s almost a country within itself, with its own housing policy, tax policy and so on.” For Megan, another positive aspect of the course it that it teaches a holistic approach to policy, looking at the bigger picture rather than focusing on specific details. “Military officers tend to deal with breadth over depth, and that is very much how this course is organised.”

The clear structure of the course and the way the modules complement each other have also stood out to Megan as key benefits. She would recommend the MPP to anyone looking for an interdisciplinary, applied approach to policy.

*These views are those of Mrs Musilli, they do not reflect the opinions or views of the U.S. Government, the Department of Defense, or the United States Navy*