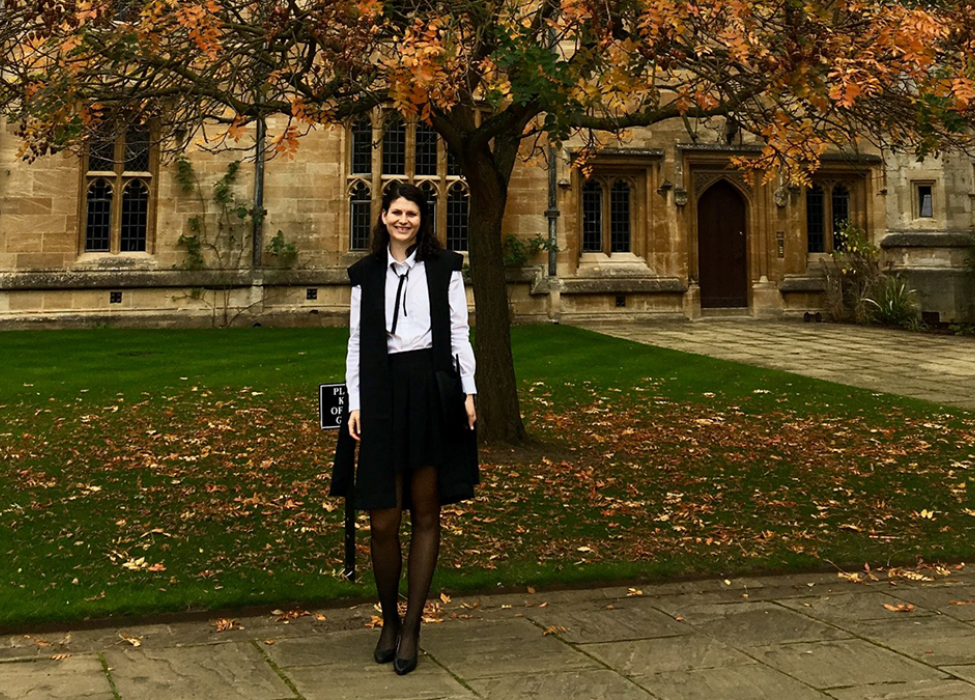 Lucy Ford (MPP 2018) joined the US Navy at 17 and was selected upon commissioning to be one of the first 200 ever female submarine officers. She chose to combine studies and military training by attending a military service academy: “I wanted to improve morally and physically as well as academically, and the Naval Academy allowed me to do that.”

Lucy proved her grit when it comes to duty during her time at the service academy and will continue to do so in the submarine force: time down on the submarine involves working seven days a week, 18–19 hours a day. She notes the importance of time management, whether working on the submarine or studying for a challenging course like the MPP. “You have to be forward-looking and make sure you’re always on top of things in order to properly take care of yourself.”

Lucy’s interests include climate change and energy policy, particularly in relation to national security and the military. She is proving her academic mettle with two consecutive degrees, a master’s in Environmental Change and Management, also at Oxford, and now the Master of Public Policy, to which she was drawn because of its applied nature.

“I wanted something practical and the MPP has allowed me to build upon aspects from my previous studies. I’ve taken classes in transnational organised crime and cyber security, so focusing more on the national security side of things, and I’m looking forward to the summer project as it’s a really valuable opportunity to combine all of my interests.”

On being a pioneer in terms of women’s representation among submariners, Lucy says: “Part of what I want to do is help lead that path – to pave the way for others to come, but also to make sure that those in the submarine service are taken care of. I think that bringing women and diversity into different units really changes culture for the better. We need that in the military and we need that overall.” On the MPP, the diversity of the class – with 49 different nationalities represented and a range of professional backgrounds – is an important reflection of the real world. “Working within a group like this demonstrates the need to respect different opinions and understand why people have come to hold certain beliefs – it’s been good to explore that.”

She has also relished delving into why we make policy and why we choose certain policies over others. “I look forward to bringing that back into the Navy,” Lucy says.

“I’m definitely not a natural-born philosopher so the Foundations module has allowed me to step outside of what I’m used to. The style of teaching on the MPP, with its grounding in philosophy, encourages you to approach different problems from a range of viewpoints.”

Alongside her studies, Lucy has been busy making the most of life in Oxford. She was on the executive committee for strategic studies at All Souls College, which involved bringing in speakers from the fields of international relations, the military and foreign affairs. “Being in such an international environment brings a lot of different opportunities,” she says. “For example, I was able to attend the 75th D-Day anniversary celebrations in Portsmouth. You also get the chance to hear from so many interesting speakers who bring a range of perspectives.”

Speaking about the relationships formed over the course of the year, Lucy says that she envisages keeping in touch with her classmates long after graduation. “I think it’s really important to continue those relationships, not just from a professional point of view, but in terms of having diversity of thought. When I’m back with the Navy, which is a global force, it will give me a better understanding of what the global view is, so I will be able to make informed decisions. On a broader level, I’ll have a better understanding of the alliances we have with our international partners.”

Lucy will be able to put the knowledge and skills gained from the MPP into practice during her summer project with the Secretary of the US Air Force, working in the field of Installations, Energy and Environment. After completing her summer project, she will attend Nuclear Power School in Charleston, South Carolina, before being assigned for Sea Duty.

The views expressed above are those of LTJG Ford and do not necessarily reflect the opinions or views of the US Government, the Department of Defense, or the United States Navy.