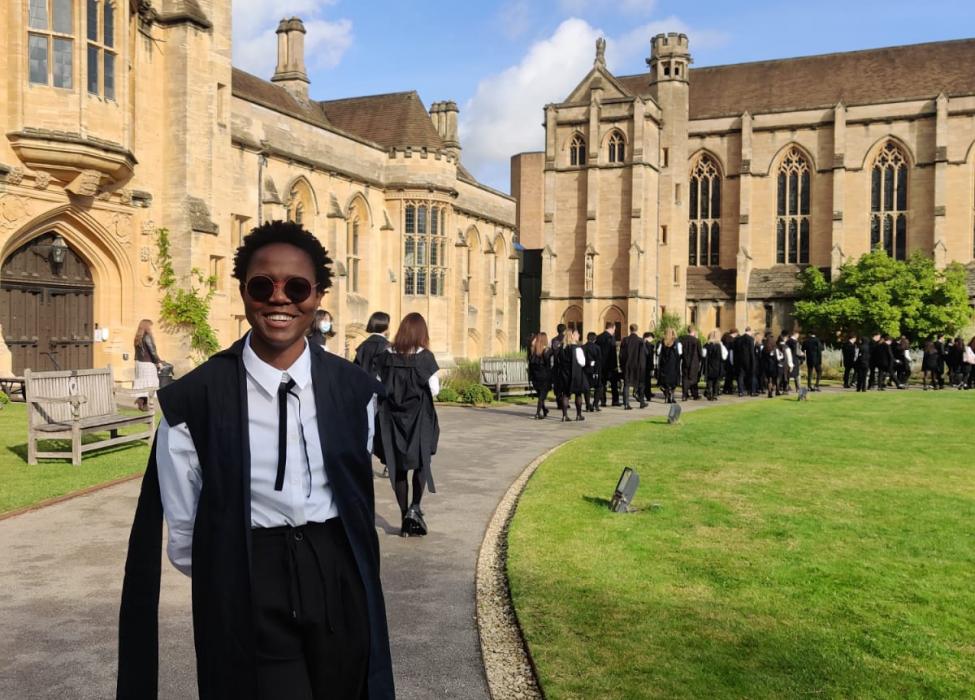 For many people globally, education has the power to bring opportunities and lift people out of poverty. Yoliswa Msweli (MPP 2021) attributes her modest progress in life to the fact that both of her parents were able to be educated. With her father’s education funded by the church and her mother’s by her older sister using her cleaning wages, Yoliswa’s parents both went on to become teachers. As a result, education has always been a critical part of her life and her parents impressed upon her the need to pursue a route of study that would afford her a way out of the poverty they had experienced:

“I was quite academic from a young age and needed to pursue a path that was going to guarantee at least material success. I first wanted to be a doctor but discovered accounting towards the end of my high school through the influence of my peers. The economic stability and international exposure offered by accountancy appeared like something that could broaden my horizons.”

Though Yoliswa’s education allowed her to access opportunities that would ultimately secure her a better life, most of her close relations and community continue to live in extreme poverty.

“South Africa faces what we call triple evils – high levels of poverty, inequality and unemployment. 64 per cent of South African youth are unemployed. These statistics quickly become someone you know. A situation which is socially unsustainable.”

In the face of these problems, rather than slipping into apathy towards the political landscape in her country, Yoliswa asked herself “How can I contribute to making things better?” When she considers the scope and scale of the issues in South Africa a common theme emerged:

“Yes, the historical injustices of the past must be acknowledged as creating a difficult base for meaningful development. The economic insufficiencies of the democratic pact need to be confronted. That said, the present weaknesses in governance are a major contributing factor to the downward trajectory the country faces. There are unacceptable leakages in the already limited government resources, serious service delivery issues – the most recent one being the energy shortages. A large part of this present situation is due to poor governance and leadership.”

Yoliswa is an accountant with 17 years of experience working across public, private and non-profit sectors through KPMG.  Her work in International Development and charities sector whilst in the KPMG UK piqued her interest in public policy.

When she returned to South Africa after four years in the UK, she established a new socio-economic development consulting service within KPMG’s Sustainability Services team. Although she felt this work was meaningful, she could see this was not leading to substantive change on a large scale. Four years ago, when KPMG South Africa suffered a crisis of trust, Yoliswa diverted her focus from development consulting to leading KPMG’s Citizenship and Public Interest portfolio, working to help restore public trust in the organisation. This work led her to be seconded to the Office of the Auditor General of South Africa (AGSA), where she was assisting the office to deepen its proximity and value to citizens, with an initial focus on civil society. A role she has been doing for 7 months prior to starting her Master of Public Policy.

This public sector experience, combined with prior public transformational programmes she undertook with the Apolitical Academy and the Young African Leadership Initiative (YALI), a programme affiliated to the Aspen Global Leadership Network (AGLN) confirmed to her that transitioning towards public service was the next step in her career as a way to contribute to better governance in South Africa. The MPP at Blavatnik, was highly recommended by the Apolitical Academy:

“Having worked mostly in the private sector, my work experience and academic knowledge on public policy was not strong. I had skills that were transferrable, but to be really robust with the scale of the problems we have in my country, I personally felt I needed to deepen what Apolitical had exposed me to. The Apolitical Academy introduced me to the Blavatnik School. In their words, they felt the School is at the cutting-edge of public policy.”

Securing funding for studying the MPP

When Yoliswa received her offer for the MPP, while excited, she knew that was only half the battle. Without securing funding, studying public policy at Oxford would be impossible for her. She applied to all the scholarships she could find for which she was eligible, but began to feel disheartened at the rejection.

“Financing my studies was a huge stress; I applied for many different scholarships but was not successful. The funding process really tested my ability to withstand rejection.”

As a young African leader with both an ambitious vision for the future of her country as well as the drive to pursue an education to help achieve this vision, Yoliswa made an excellent candidate for the Poler Family Oxford Scholarship. When she heard from the University with this offer, she was thrilled and hopeful for what the future holds.

“It is a blessing to be in this space and I do not take it for granted. I am both deeply grateful and acutely aware of the responsibility that comes with the opportunity afforded to me by the scholarship.”

Life at the Blavatnik School of Government

Since arriving in Oxford, Yoliswa has felt “a deep sense of cohesion with the environment” and has been enjoying the opportunity to indulge her intellectual side and really take the time to pause and think through all that she is learning on the MPP. At the same time, she is cognisant of Oxford’s elite reputation, which has made her even more committed to paying her education forward after graduating.

Of her classes, Foundations has been a particular highlight:

“Working in development, it is easy to be caught up in programmes and delivery with limited room to think about the principles and value systems that underpin how programmes are designed and implemented.”

In the short term, Yoliswa sees herself in a role that will utilise her skills as an accountant, development practitioner and generalist whilst tackling things she deeply cares about – economic and social justice. As many South Africans (especially, black South Africans) remain without economic resources or the means with which to generate them, Yoliswa believes substantive economic policy reform is required to address historical injustices and promote inclusive growth. Understanding the values underpinning the current policies will be essential for enacting these changes.

Outside of classes, Yoliswa has been getting involved with the student-led ‘Ready to Run’ initiative for MPP students who plan to run for elected office after the MPP. Whether at the local or national level, her long-term goal is to run for office in her home country.

“South Africa needs the energy, direction and heart to take it towards a path that we know is possible. I feel called to be in the arena and I am therefore readying myself to run for office.”