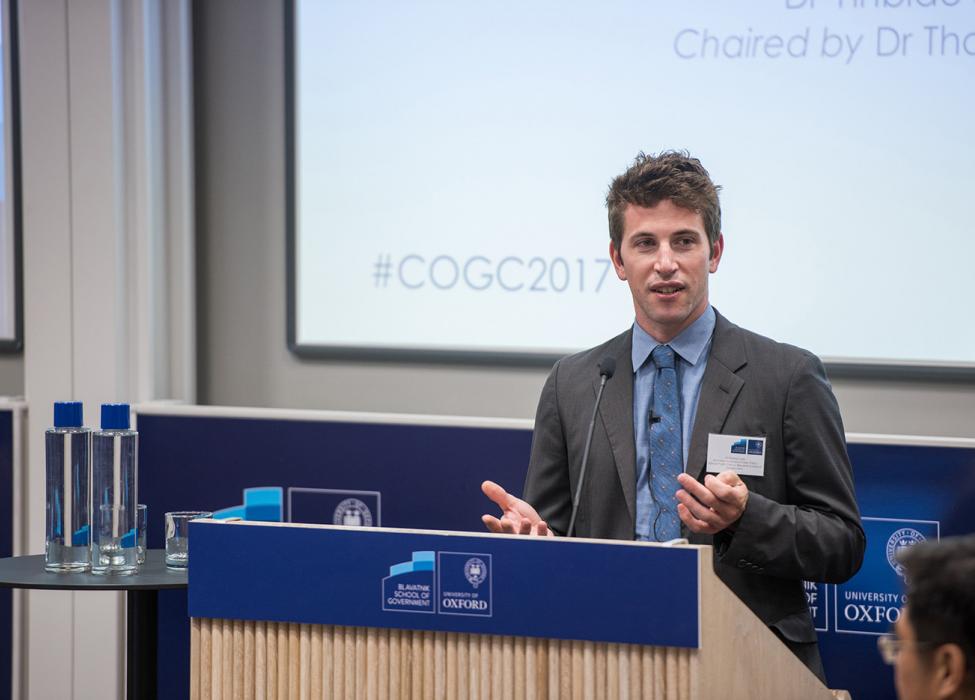 How to solve key global problems across national boundaries and how to manage the effects of globalisation and interdependence are the core issues of Dr Thomas Hale’s research. He is Associate Professor in Public Policy (Global Public Policy) at the School and specialises in environmental matters such as climate change.

One challenge facing systems of government is the need to adapt to meet the needs of contemporary global politics.

“The main problem is that we have 21st century problems and 18th century political technology and structures. The issues that an interconnected world raises weren’t issues to the same degree when constitutions were written.”

He is writing extensively about key changes in the area of climate change, and how our approach to managing climate change internationally has developed, which he sees as a rare case of innovation in multilateralism. “I’m exploring how these changes of approach come about and what they might teach us about other areas of world politics.” A particular area of interest for him is how new actors are influencing climate change governance; cities, businesses, investors and civil society are playing a much larger role alongside national governments than ever before. This raises the question of how these new forms of governance can make a difference.

‘Strengthening non-state climate action in the Global South’ is a policy-facing project within his climate change research which aims to map the actions taken by these new groups in two developing countries, India and Kenya. Non-state actors can have a huge impact in tackling climate change.

“Because climate change is something we all contribute to all the time, there’s a lot of scope for different actors to make a positive difference. For example, cities can change building codes, review their energy supplies and transport infrastructure. Private companies can alter their supply chains and the way their products are designed. And so on.”

Another successful project that Thomas has been driving is ‘Galvanising the groundswell of climate actions’, a network of organisations working on the role of non-state actors in the climate change regime. “It’s become a key venue for governments and other actors to discuss changes, it provides thought leadership and analysis, and helps to mobilise groups. We’ve contributed to some of the most interesting shifts in the climate regime, for example the NAZCA Portal the UN now uses to see what the different actors are doing and monitor their progress.”

Additionally, Thomas is involved with researching the role of China on the international arena: how the country’s role is changing over time and what this means for global governance. He helps manage the School’s relationship with China and leads a new research project analysing the geopolitics of the ‘Belt and road initiative’, a Chinese-led infrastructure plan, which is strongly related to environmental sustainability.

“The rise of China means a substantial geopolitical shift globally. We need an interactive conversation both within and outside of China, and I hope that we at the Blavatnik School can be central in hosting that conversation and taking it in a positive direction.”

His work on gridlock is an over-arching project, asking how we can best manage global politics. A geopolitical landscape characterised by multipolarity and institutional inertia has emerged because intergovernmental organisations created after the Second World War were so effective in deepening globalisation that they lost their ability to manage the new kinds of interdependence they created. These issues were covered in Gridlock, co-authored with David Held, and the book’s sequel, Beyond Gridlock, looked for ways forward. “Now we’re looking to write a more action-oriented book, asking what we can do with these findings.”

“There’s a real risk that we’ll end the 21st century in a worse position than we entered it as a civilisation. Finding a way to manage our interconnectedness is crucial to making sure that doesn’t happen. I’m optimistic that we can make real progress in finding solutions. I hope we’ll see more research into the big questions; as anyone living on this planet knows, we have to face up to them.”

Find out more about Galvanizing the Groundswell of Climate Action