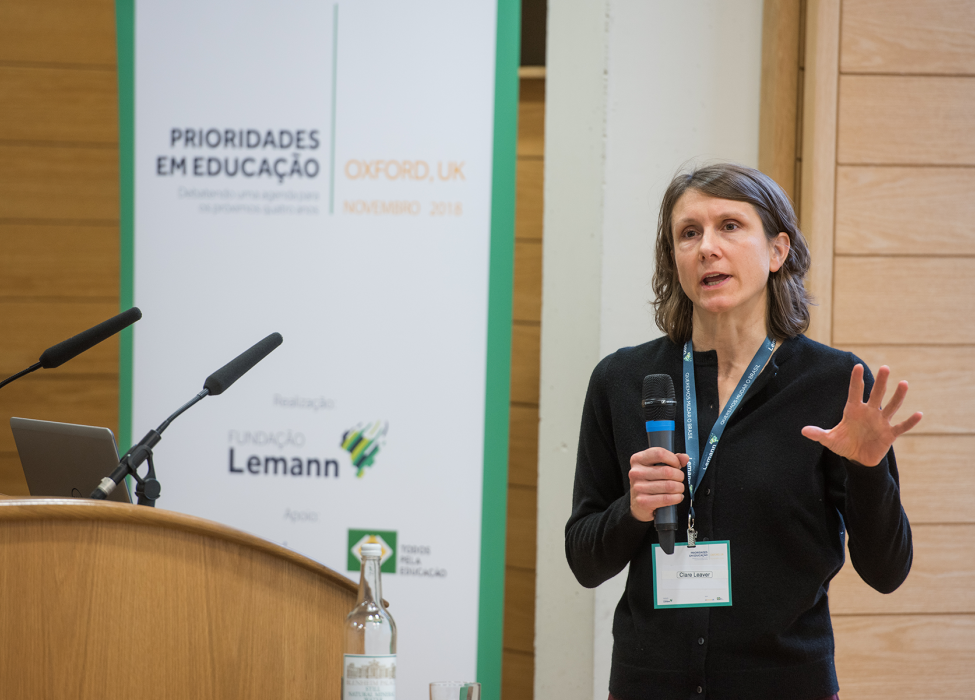 Dr Clare Leaver is Associate Professor of Economics and Public Policy at the Blavatnik School of Government, Research Coordinator of the Research on Improving Systems of Education Programme (RISE), and Research Co-Director of the Research on How to Deliver Education Reforms (DeliverEd) programme. Her research focuses on careers and incentives within the public sector, with much of her recent work examining incentives for educators in low- and middle-income countries.

Since 2014, Clare has been working closely with the Rwandan government to investigate the effectiveness of ‘pay for performance’ in teacher recruitment and retainment, and on overall learning outcomes. In a recent piece of RISE research, Clare and three colleagues partnered with the Rwanda Education Board to carry out a two-tier randomised control trial (RCT) that measured the effects of two alternative ways of increasing teacher salaries: a pay-for-performance contract that paid the top 20% of teachers in a district a bonus of 100,000 Rwandan francs (15% of the average salary), and a fixed-wage contract that paid every teacher an extra 20,000 Rwandan francs (3% of the average salary). The top 20% were identified by assessing four ‘P’s: their presence, preparation, pedagogy and students’ performance.

After two years, the study showed that pay-for-performance produced better learning outcomes than fixed wages by improving teacher presence and classroom conduct. “We wanted to separate out whether improved outcomes were down to the incentive changing how people worked, or down to pay-for-performance attracting a different type of job applicant in the first place,” says Clare. To do so, the team compared teachers who applied under different contracts and then worked under identical conditions with teachers who applied under identical contracts and then worked under different conditions. They found those recruited under pay-for-performance contracts were more ‘money oriented’ but, on average, just as effective as fixed-wage recruits. In the second year, pay-for-performance recruits outperformed their peers – and this ‘recruitment effect’ accounted for one quarter of the improvement in learning outcomes. “In Rwanda, lots of people train as teachers but don’t stay on to become teachers – instead, they quit and join the private sector,” says Clare.

“Our findings suggest pay for performance could help address the challenges of teacher recruitment and retainment in Rwanda, as well as improve the efforts of teachers while on the job.”

While the idea of pay for performance is controversial in some circles, this has been largely influenced by theories and evidence coming from research carried out in the UK and US.

“In education systems that are already performing well, it may make little sense to layer a bonus scheme on top of an already functioning system – but to dismiss the idea completely neglects the challenges in dysfunctional systems where some teachers are failing to perform even the basics.”

World Bank research in Tanzania in 2012, for instance, found more teachers absent from class than present during unannounced visits in scheduled classroom time.

While pay for performance is generally unpopular among teachers in higher income countries, results from a survey carried out by Clare in Rwanda showed over 80% of teachers approved of the system – echoing results from previous surveys in India and Tanzania.

“The success of pay for performance is highly context dependent, as it will be influenced by a multitude of factors – from the resources available to implement such incentives, to local political attitudes towards such schemes.”

The completed research paper was recently accepted for publication in the American Economic Review and, in light of the promising results, Clare and her team are continuing to work with the Rwandan government as they revise their teacher recruitment and retainment strategy.

In addition to her research on pay for performance, Clare is also developing a research programme on education reform delivery in Ghana as part of the DeliverEd programme. DeliverEd was established in 2019 in partnership with the Education Commission. The programme seeks to answer the how of education policy implementation: “We want to focus on how bureaucrats do things to ensure that once policy decisions are made, they are properly implemented,” says Clare. The project will investigate the effectiveness of ‘delivery approaches’ – an institutionalised unit or set of processes within government bureaucracy that aim to improve bureaucratic functioning and policy delivery by combining a set of managerial functions. So far, the most widely known type of delivery approach is the delivery unit – a new unit located in an executive office (such as the former Prime Minister’s Delivery Unit in the UK) that amplifies the technical oversight capacities of the executive leader.

“There’s been an assumption that this top-down approach is the most effective way of implementing policies to improve learning – but there is very little evidence that this is the case, particularly in low- and middle-income settings.”

DeliverEd’s work covers five countries: “We’ll be looking retrospectively at the existence of delivery approaches in Jordan, Pakistan and Tanzania. In Ghana, we have an opportunity to work with the government as it implements its ambitious education sector plan.” The research in Ghana will draw on mixed methods, including process tracing interviews with participants from the Ministry of Education at the top of the delivery chain down to individual schools at the frontline, and potentially an RCT contrasting different delivery approaches across a sample of Ghana’s 250 districts. Clare and DeliverEd researchers are also proposing to study the ongoing implementation of the Aspirational Districts Programme in India.

“It’s not enough to have the right policies if you don’t have an effective way of putting them in place. DeliverEd’s research is an exciting opportunity to close the evidence gap on delivering educational reform in low- and middle-income settings.”