An arresting new public sculpture installed outside the School by one of Britain’s most celebrated artists. 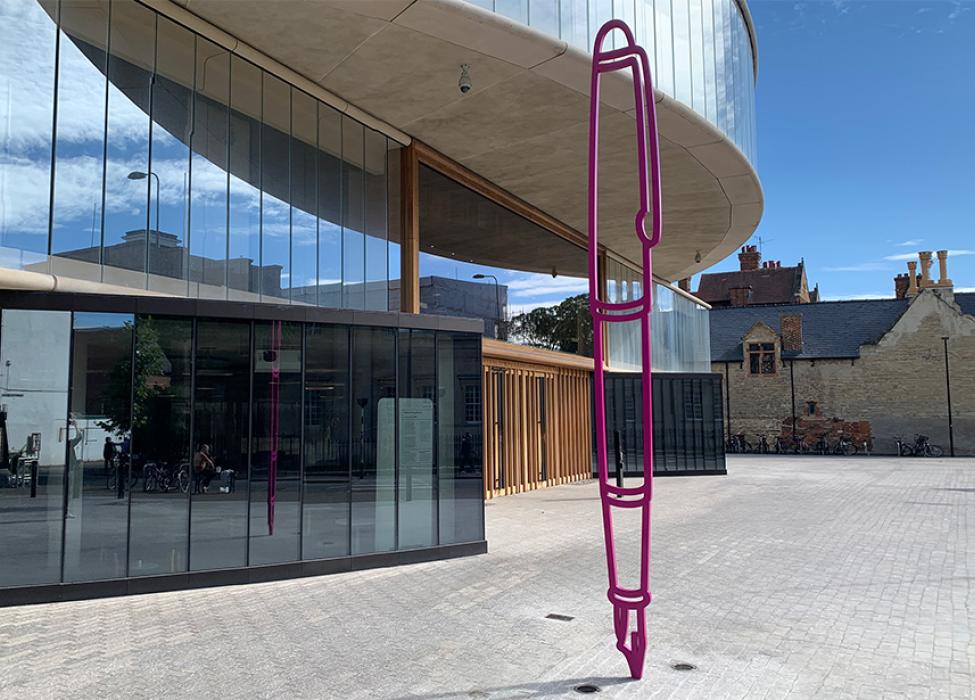 Michael Craig-Martin's sculpture Fountain Pen, 2019, was commissioned by the Blavatnik School of Government to celebrate the University of Oxford’s Radcliffe Observatory Quarter (where the School is based) and enliven the local environment. The public artwork will be accessible to all and is intended to express the unique history of research and learning carried out in the city.

The sculpture is a vivid magenta in colour and balances strikingly on the single point of the pen’s nib. Craig-Martin's sculptural works have a powerful visual impact and relationship to their surroundings and Fountain Pen echoes the circularity of the Blavatnik School building and its notable banding, designed by Herzog and DeMeuron. The modern, bold aesthetic is appropriate given its location next to the School, whilst its connotations of learning and the written word echo and emphasise the cultural identity of Jericho, whose history has been so heavily shaped by the University Press and the Radcliffe Infirmary which was influential in the progress of medical learning.

“The image I proposed for Oxford was that of a fountain pen. The image can be seen as a reference to serious study and learning, particularly to the signing of important documents, an age-old formality that connects, like Oxford itself, the past and the present, and which is recognised globally.”

“When the Blavatnik School building was granted planning approval, one of the conditions was that we would commission a piece of freely accessible public art. We’re delighted to have Michael Craig-Martin’s striking work – he is already known in Oxford for his mural at the JR Children’s Hospital and we hope his new installation will further contribute to the city’s environment and community.”

Michael Craig-Martin was born in Dublin, Ireland, in 1941 and has lived and worked in Britain since 1966. He is well known to have been an influential teacher at Goldsmiths College, London, and over the past forty-two years he has had numerous exhibitions and installations in galleries and museums across the world. His best-known works include An oak tree of 1973, in which he claimed to have changed a glass of water into an oak tree; his large-scale black and white wall drawings; and his intensely coloured paintings, installations, and commissions.