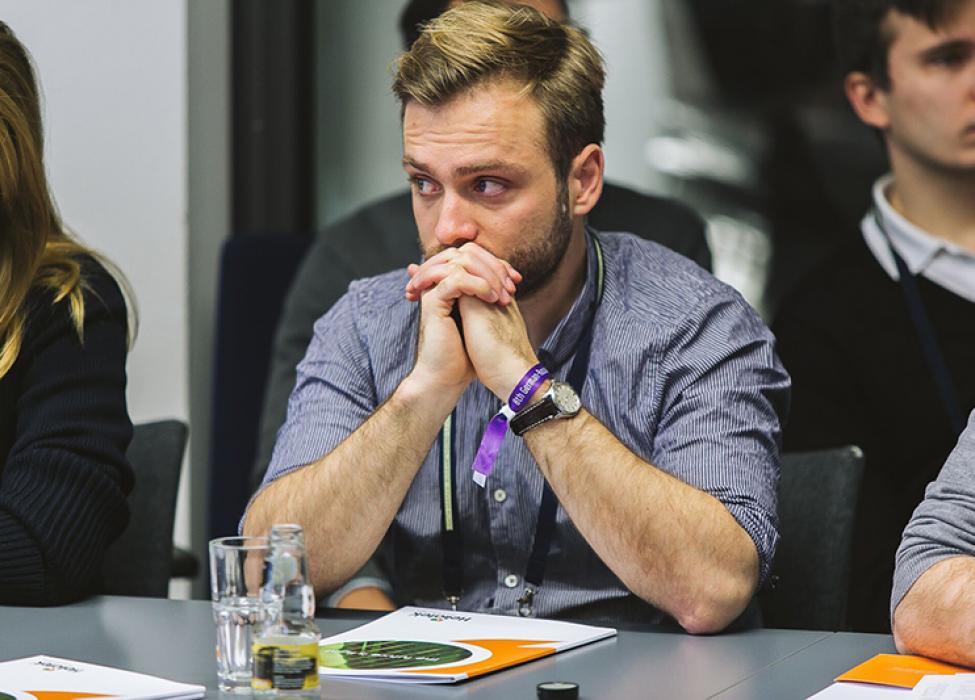 In addition to his 60+ hour week working as a resident physician in a hospital in Berlin, Sven Jungmann is Director of the Healthcare Initiative at the XU Exponential University of Applied Sciences, a freelance healthcare consultant, and Partner for Social Innovation Advisory at For Society Capital. He additionally speaks on panels advising on the digitalisation of healthcare policy, runs hospital focus groups on big data, writes articles for Mind This magazine, and is involved with promoting the value of refugees to the German economy.

“I’ve always pushed myself,” said Sven. “As a fourth year medical student I decided to undertake a 2-month elective in trauma surgery at Soweto Hospital in Johannesburg, one of the largest hospitals in the world. People told me I was mad to go and tried to talk me out of it. But the experience was transformative.”

It was while treating the continual stream of patients who’d suffered from burns, gunshots and stab wounds that he began to think that he wanted to make a bigger impact. “I remember two sisters coming to visit who’d had their faces slashed by a broken bottle, one had been defending the other from her husband. I treated them as best I could, and asked them to fill out a police report form. They both recoiled, refusing to do so. It dawned on me then that I wasn’t satisfied just patching things up and moving on to the next patient, I wanted to create lasting changes that would positively affect society and make a difference to communities.”

After discussing his frustrations with a friend who studied medicine at the University of Oxford, Sven began browsing the University’s courses and came across the Blavatnik School of Government’s Master of Public Policy. He hadn’t necessarily intended to undertake a second Masters degree, but the course description struck such a strong chord with him that he took the decision to apply.

“When I said I was applying, some people told me I was becoming delusional, and fellow doctors thought I had lost focus. But I believe so strongly that human welfare and health are complex issues that need to be considered through more lenses than just the purely medical that I took the plunge and applied. Taking a risk paid off with studying in South Africa, and it paid off again studying at the Blavatnik School of Government – my year at Oxford was invaluable.”

Sven found the modules on economics, strategy, negotiations and project management particularly useful. “These short but intensive courses have provided me with such a strong framework knowledge of how to dissect a problem, liaise with stakeholders and undertake analysis. I find myself using these skills on a daily basis to unpick issues I’m facing.” He also notes the importance of the lessons he gained from his peers, speakers and practitioners. “Interacting with a global spectrum of people from a range of industries on a daily basis was inspiring. I was afforded a unique opportunity to look at an array of problems through different lenses, and this only increased my aspirations to do good.”

He undertook his Summer Project at the European Commission’s eHealth and Wellbeing Unit, and co-authored a working paper for the Cyber Studies Programme with the Head of the eHealth and Wellbeing Unit European Commission, titled ‘From Spectators to Change Agents: Empowering European Citizens as Drivers of e-Health Innovation’. Sven describes the experience as “life-changing”, and roots his decision to return to clinical medicine in his Summer Project, as he realised that his practical experience as a medic affords his policy advice more merit: “I have a desire to shape healthier societies through meaningful insights from the frontline,” he said.

Now as a full-time doctor Sven works for the largest privately owned hospital chain in the country. The chain have just bought a number of hospitals in Spain, and hope to innovate the way healthcare is delivered in both countries based on each other’s insights; Sven has been afforded a number of opportunities to help drive change initiatives. “I’ve also been working on a project, funded by the German Ministry of Health, on health apps – having practical experience has proven vital for advising on best practice, and what will actually be useful to hospital doctors.”

“I’ve also just become involved with a newly founded university, XU Berlin, that offers corporate education and will launch bachelor and master degrees in 2017. I’m putting together courses on digital transformation and healthcare leadership which I’ll also get to teach on – it’s really exciting to be afforded the opportunity to share the knowledge I’ve gained.”

Next, Sven intends to undertake more scalable projects, and looks to focus his energies on more consultancy and policy work. “I’ve loved being involved in innovation projects within my hospital, but I’d love to be affecting change from a higher level, which could be implemented across the country’s healthcare systems. I’m excited to see what my next project could be.”