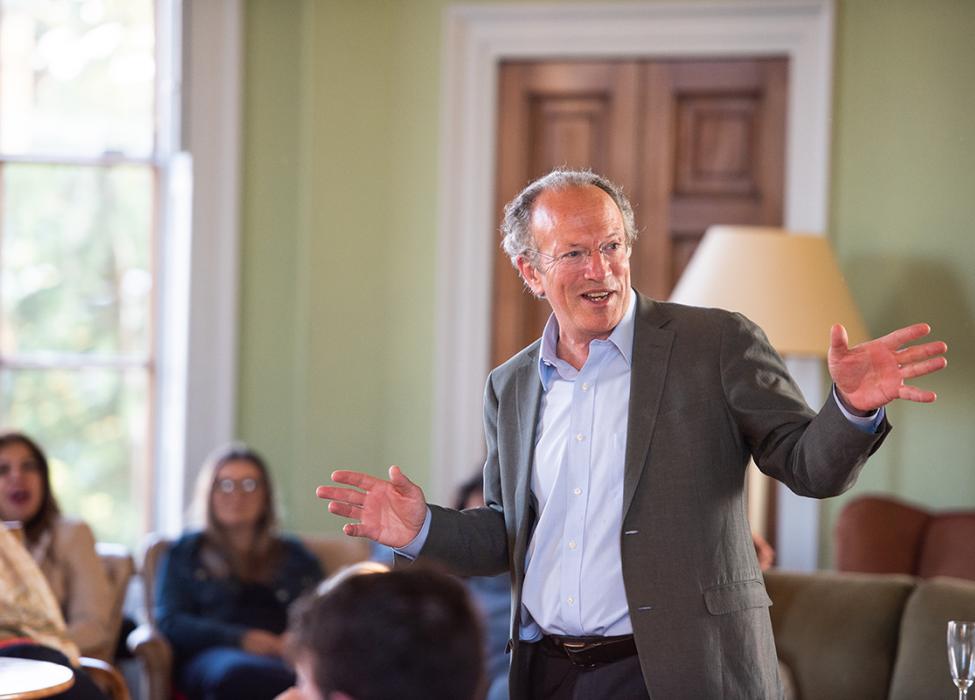 Christopher Stone is Professor of Practice of Public Integrity at the Blavatnik School of Government. With an extensive experience working with governments and civil society organisations all around the world, the overarching theme of his career is helping people in positions of authority to advance rights, justice, and good governance.

Chris interacts with people in positions of authority operating at different levels directly and through the Blavatnik School’s executive programmes. From government officials working in institutions that advance justice – such as prosecutors, attorney generals, justice ministers, judges, and duty solicitors– to those whose work is focused on specific issues (for example housing, education, or crime), they all share an ambition to create more just societies, enhance public integrity and fight corruption in government. Chris promotes, facilitates and moderates discussions among these groups and also with social activists and leaders of human rights organisations and social movements (often in partnership with Oxford’s Bonavero Institute of Human Rights).

Drawing from political theory or legal doctrine, or using practical case studies that represent the reality of political, financial and popular pressures, Chris introduces new and complex questions that these professional figures might not have come across before in their roles.

The blend of theory and practice is a common theme in Chris’s own career. A lawyer by background, he says: “When I was leaving university at the beginning of my career, I thought I’d always be unhappy, because I would constantly have to alternate between practical and theoretical work. But I’ve been lucky to find professional environments where I can mix both.”

One of his long-standing collaborations is with South Africa’s justice reform. Chris started working in South Africa in the 1990s during Mandela’s presidency, when the Minister of Justice at the time Dullah Omar asked for support in implementing an all-encompassing justice reform, which included the creation of a national prosecuting authority. Since then, Chris has been continuously involved with South Africa through different projects; the experience informed a project which looks at what we can learn about public integrity from reforms in South Africa’s government after the Zuma years.

“When a government is afflicted by corruption, we tend to put the blame on people for 80% and on structure for 20%. But we’ve probably got the proportions reversed. What we see in South Africa is that changing people and policies is not enough to rescue a government from entrenched corruption. More attention should be paid to making structural changes and, most important, building a culture of professional excellence in government.”

For many years, Chris worked with Chinese lawyers and officials to strengthen the rule of law. He learned from judges of the Supreme People’s Court how in the Chinese context they could encourage less reliance on the death penalty. He also collaborated with Chinese legal scholars on the design of practical experiments to strengthen integrity of police investigation of crime, reducing the use of torture and deception. Although no longer actively engaged in China, Chris continues to follow the further expansion of the rule of law there, including this in his MPP teaching.

A persistent theme in Chris’s professional life – and which has become particularly salient in the last year with the Black Lives Matters protests – is police misconduct. As part of this, Chris supported the School’s Case Centre on Public Leadership in preparing a case study on 'stop and search' for MPP teaching. Since the start of his career, he has focused his attention on how we can improve the experiences of people living in heavily policed urban communities.

In these communities – anywhere from Los Angeles and Birmingham, to Beijing and Johannesburg – encounters with the police are very frequent. These encounters can be benign and helpful, or they can be oppressive and dangerous – in too many countries it’s the latter, and this is not linked with the country’s prosperity or democratic credentials. Policing in a democratic system and in authoritarian regime can appear surprisingly similar – so what is the distinction? For Chris, answering this question drew on years of working with community residents and front-line police officers, as well as police and civic leaders.

“The distinction between democratic and authoritarian policing is accountability. In dictatorships or authoritarian regimes police accountability runs only in one direction – upwards, towards management or the president. In a democracy police are accountable to multiple actors: upwards, but also to community structures, courts, legislative committees, independent monitoring systems, and the media.”

Although Chris insists that a fully and truly just society is unattainable in the real world, the quest for justice is a powerful source of inspiration in itself.

“Advancing justice is always an unfinished project. The closest we get to tasting justice in the real world is participating in the struggle for justice. Whether I’ve been litigating as a defence lawyer, helping a prosecutor at the International Criminal Court, or working with judges in China, activists in South Africa or police leaders in Chile – I have always tried to work with people who are in their own way struggling for a more just society. That for me is the most rewarding work I can imagine.”