Yemen is shattered and peace seems a long way off. The world can’t just watch on 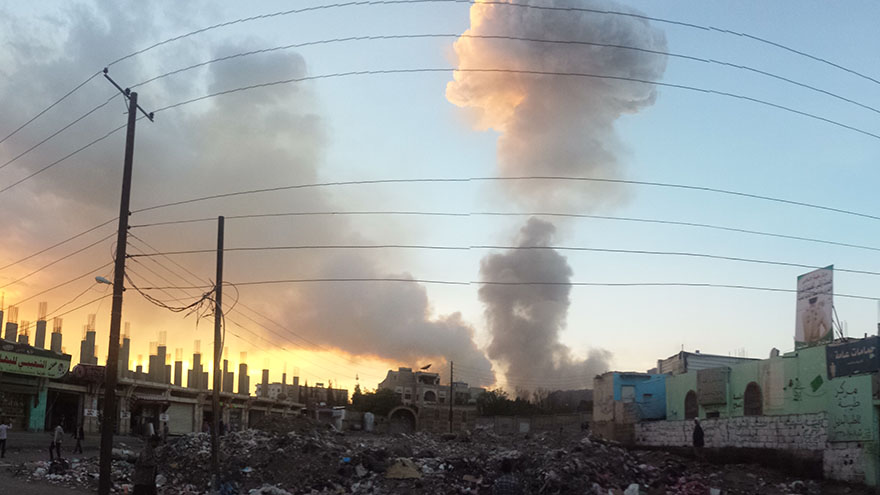 “For us, the future is lost. There is no hope.” That’s what Ali Ahmad told BBC interviewers who were trying to find out what life was like under the current war in Yemen. Ali comes from Taiz, a governorate that has for months been under siege by the militias of former president of Yemen Ali Abdullah Saleh, and those of the Houthi rebel movement.

Taiz epitomises the suffering of people across Yemen: as the city suffers not only from the shelling and siege of militias, but also from the airstrikes of the Saudi-led coalition (such as the airstrike targeting a wedding in September and killing more than 130 civilians, according to the UN high commissioner for human rights) and the wider blockade that the coalition is enforcing on commercial and humanitarian shipments to the country.

As the poorest country in the Arab world is collapsing in front of the world’s eyes, a whole generation of Yemeni youth and children are losing their future. The military campaign led by Saudi Arabia in Yemen is nearing its seven-month mark, with arms and wide-ranging logistical, technical, and intelligence support from the United Kingdom and the United States and other western allies. This war has resulted in an “nearly incomprehensible” scale of human suffering, according to the UN humanitarian chief.

The figures speak for themselves: after a few short months, the growing toll stands at more than 5,000 dead and 26,000 injured, with a staggering 86% of those killed and injured being civilians, according to the NGO Action on Armed Violence and the UN Office for Coordination of Humanitarian Affairs. Almost 2.3 million have fled their homes in terror and most striking of all: more than 21 million people (about 80% of the population) are in desperate need of humanitarian assistance. Many, if not most, of those with the means to leave the country – that is Yemen’s middle and upper classes – have already left.

Leaving the Yemen conflict unresolved isn’t only devastating to Yemen and the region, but also to British and American interests. A Yemen ensnared in war threatens many of the expected gains from the Iran nuclear deal; gains that cannot be realised in a heavily unstable region with multiple ongoing wars. As long as the conflict continues, the strategic Bab al-Mandab strait appears set to be mired in conflict; Yemen’s Gulf neighbours remain at risk of spillover.

Indeed, the only beneficiaries from an extended conflict in Yemen and the consequent collapse of state institutions are extremist groups such as al-Qaida and Islamic State (Isis). These groups have been gaining ground and filling the power gap resulting from the ongoing chaos. Since early April, al-Qaida has held Hadhramout, Yemen’s largest governorate and one of the two major oil-producing regions in Yemen. In July, the Brookings Institute said that Isis was the “one local winner” of this war.

In recent weeks this assessment has appeared to prove to be overly optimistic, as Isis, practically unknown in Yemen until this war broke out, has claimed a number of bloody suicide bombings in the capital Sana’a, and released a number of videos bragging about their armed presence in the city of Aden. On 6 October, a series of suicide attacks targeted the government’s headquarters, and the headquarters of the UAE forces in the city of Aden. Isis quickly announced responsibility for the attacks, releasing photos and videos of the suicide bombers.

One of the suicide bombers in particular sent a ripple of fear and disbelief among the residents of Aden. Moath Anwar, who was known as Abu Sa’ad Al-Adani, according to the video and photos released by Isis, was a young man in his early 20s from one of Aden’s districts. The photos on his Facebook profile, where he goes by the alias “I’m a deadly crazy dude” written in colloquial Arabic, show him as a fashionable young man with well-groomed hair and clothing in the latest trends. Those who know him still cannot comprehend how he was recruited by Isis. But we think the trend is clear: the starting point is always: “The future is lost. There is no hope.”

In 2011, Yemenis of all political stripes, including Houthis, flocked to the streets in hopes of a better future. Today, many of those who once found themselves standing side by side in protests now find themselves on opposite sides of the battlefield. It’s a tragedy that underlines the flurry of broken dreams and shattered hopes in the country.

Today the world is watching the killing of innocent civilians in Yemen every day, and it is a shame to stand as silent observers while millions of Yemenis suffer from a conflict that they have no control over.

The UK, together with its international and regional partners, needs to publicly pressure both sides – the Saudi-led forces and the Houthi rebels backed by ex-president Saleh – to agree to a ceasefire and return to a political settlement immediately. At the moment, such a peace settlement remains in the realm of the possible. But, left to smoulder, Yemen risks continuing to inflame the region for years, if not decades to come.

This op-ed is co written by Farea Al-Muslimi and Rafat Al-Akhali (MPP Class of 2012) and was first published in The Guardian's Comment is Free on 22 October 2015.
Conflict and stability