Working with Mahathir – the right thing to do? 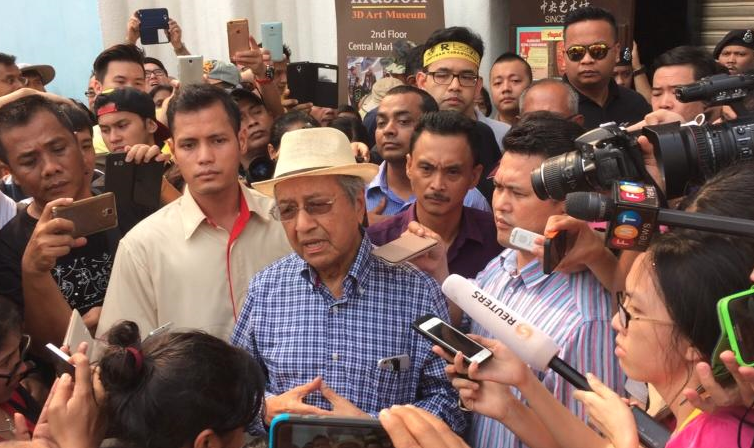 Earlier this week, a group of influential Malaysians signed a “Declaration” calling for Prime Minister Najib Razak to be removed and for institutional reforms.

This is a major escalation in the effort to remove Najib, and an extraordinary development in Malaysian politics. Najib has faced months of exposés, investigations, and rebukes for corruption relating to the 1MDB scandal.

[caption id="attachment_8158" align="aligncenter" width="754"] Dr Mahathir speaks to the press in front of the Central Market (Credit: The Star, Malaysia)[/caption]

The signing of the Declaration is the first time that Najib’s critics from opposing sides have explicitly united against him. Opposition leaders and civil society figures on the one hand, and disaffected members (and ex-members) of Najib’s own party on the other hand, have put their differences aside to “save Malaysia”.

Opposition and civil society leaders who signed the declaration are still “coming to terms” with working alongside Dr Mahathir Mohamad, the leading figure of the Declaration effort, who they opposed for decades for his authoritarianism during his Premiership. Many supporters of opposition and civil society leaders have been left questioning this cooperation.

Is working with Mahathir the right thing to do? I believe this question consists of two elements. The first element is strategy, and the second element is morality. I will not present a definitive conclusion for either element, but I hope to highlight what I think are the main arguments for both.


Firstly, is working with Mahathir strategically sound? I suggest that the answer depends most heavily on one consideration. The consideration is not just whether the cooperation will remove Najib, but instead whether it will change institutions.


You may think that ousting Najib is so important, that any other consideration is secondary. This is a risky position to take. As Prime Minister, Mahathir distorted Malaysia’s institutions. Accountability mechanisms were weakened, while Prime Ministerial powers were strengthened. When Mahathir stepped down in 2003, many were optimistic that things would be different under new leadership. Instead, Abdullah Badawi attempted reforms but was unsuccessful, and Najib further exploited the distorted institutions.

Here’s one example to illustrate the point. As Prime Minister, Mahathir increasingly “personalised” the police force, the most important enforcement institution in the country. The police force became less of “a neutral regulatory regime” and more of a “personal instrument” of the Prime Minister (as described by Lee & Nesadurai in a chapter in the 2010 book, Political Change, Democratic Transitions and Security in Southeast Asia). Fast forward to the present: the very same police force ignores police reports against Najib, and instead arrests the individual who lodged the reports. The man (Mahathir) left, but the institution remained.

The importance of institutions is universal. Political Scientist Sven Steinmo, in a 1989 essay in World Politics, argued, “institutions provide the context in which interest groups, politicians, and bureaucrats define their policy preferences.” To continue our example: if Najib knew the police force would act neutrally, he may have been less disposed to act unlawfully.


You may then ask: if institutions are so important, and Mahathir distorted institutions, then can working with Mahathir improve institutions? Only time will tell for sure; however, two points can be made at present.

One point is that Mahathir is still one of the most influential figures in Malaysia. His involvement likely increases the chances of reaching the tipping point needed for any leadership change – in this case a necessary condition for institutional change.

The other point is that Mahathir at present is not the same Mahathir who distorted institutions. I do not mean that his character has changed, but rather his incentive structure has changed. Mahathir-the-Prime-Minister had an incentive to consolidate power around his office, while Mahathir-the-retired-politician does not.


The second element in deciding whether opposition and civil society leaders are right to work with Mahathir is that of morality. Is working with Mahathir morally acceptable?

Some may argue that Mahathir acted unlawfully and wronged many during his Premiership, and to work with Mahathir would then be morally wrong, for two reasons.

The first reason involves justice. Any outcome jointly devised by Mahathir could absolve him from his past wrongdoings. Not only would he escape punishment, he may even be ultimately rewarded through a more positive legacy. The second reason involves loyalty. Cooperation with Mahathir in and of itself could be immoral, because it would be a betrayal of those he had wronged.

The issue of justice is not easily resolved, but I suggest two considerations. One consideration is that it is not unusual for justice to be sacrificed to obtain better outcomes. For example, countries transitioning from conflict often choose peace over justice – Myanmar's political transition is the latest instance of this trade-off. Another consideration is that we may have to choose between bringing Mahathir or Najib to justice.

The issue of loyalty is more easily resolved. First, because loyalty itself is of limited moral worth. And second, because – as constitutional lawyer Syahredzan Johan has pointed out – those who were most wronged by Mahathir have themselves signed the Declaration and agreed to work with him.

On the other hand, there is an urgent need to change the course of the country. Not changing the course of the country would lead to continued losses and suffering for Malaysians, current and future. If working with Mahathir can help bring about this change (in other words, it has strategic value) then working with Mahathir also has clear moral benefits.

It seems to me that the moral benefits are potentially enormous, while the moral costs are smaller.

You may or may not agree with this assessment. But in any case, the Declaration has already been signed. What must be done now, is to insist that any change includes the institutional changes demanded in the Declaration, which are:

“A repeal of all the recent laws and agreements that violate the fundamental rights guaranteed by the Federal Constitution and undermine policy choices … a restoration of the integrity of the institutions that have been undermined, such as the police, the MACC, Bank Negara and the PAC … [and] to restore the important principle of the separation of powers among the executive, legislature and judiciary.”

Additionally, Malaysians must not accept empty promises of institutional change. Let us learn from the shortcomings of the 2011 Egyptian revolution, captured by this Tahrir Square protestor: “Our mistake was to leave the square before our demands were met. We should have stayed until they were.”

The opportunity to change institutions does not come often. If Malaysians don’t insist on it when the moment of change comes, it may never happen at all.

Yu Ren Chung is a Malaysian human rights activist. He is currently pursuing a Masters degree at the Blavatnik School of Government at the University of Oxford. Follow him @renchung. This blog was originally published as an op-ed on Malaysiakini.