Why has Dilma Rousseff promoted so few women? 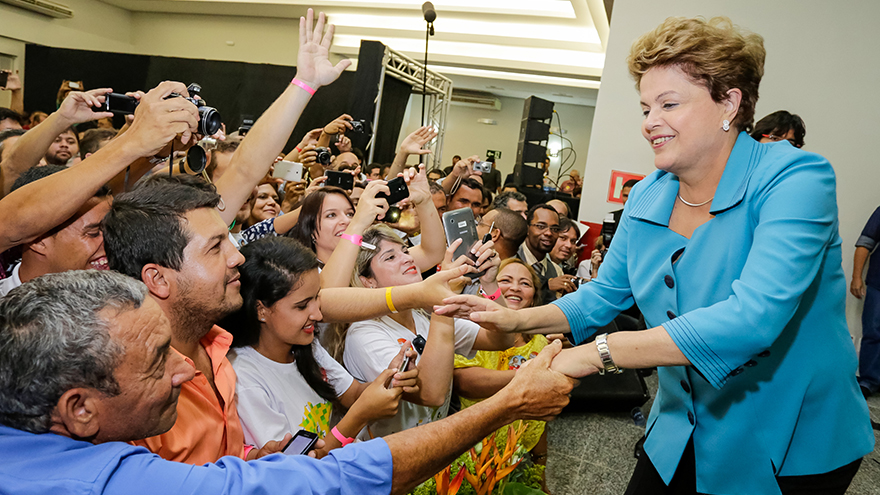 Brazil’s President Dilma Rousseff will soon submit nominations for senior positions to the Congress for approval. Positions up for nomination include directors at the Brazilian Central Bank (BCB) and a judge on the Brazilian Supreme Court (Supremo Tribunal Federal – STF). But Rousseff, one of the world’s most powerful women, seems scarcely inclined to address the very poor gender balance in her government.

Among the names put forward, both formally and informally there are no female candidates for the BCB and very few for the STF.

Unfortunately, Dilma’s Presidency has done little to change the role of women in Brazilian politics.

Rousseff’s government has failed to come up with a robust policy for women’s inclusion in political power, and its attempts during her first term had only short-lived effects. What initiatives were taken were more symbolic than anything else, and unsurprisingly, they have failed to secure lasting and effective institutional change in Brazil’s very male politics.

And true to form, Rousseff’s second term has begun with setbacks. Within the executive branch, far fewer female appointments were made to ministerial positions than in the first term, with only six (15%) in 2015 to 11 (28%) in 2011, out of a total of 39 appointed positions.

Since the beginning of her administration, Rousseff has appointed 92 political leaders to ministerial roles and posts with the same status – the BCB governor and the Attorney General. Only 15 of those appointed have been women (16%). Overall, men have been more likely to be re-appointed, and women were more likely to be replaced by male appointees. Women occupied only 12 of the 39 Brazilian ministerial posts.

In the judicial branch, Dilma appointed a total of 16 ministers to the STF and to the Brazilian Superior Court of Justice (STJ), of which only three were women.

By comparison, in Chile, Michelle Bachelet’s second term saw nine of 23 Ministries led by women, after ten in her first. Outside the executive, Isabel Allende now leads the Chilean senate (although the overall progress in the legislature is slow yet).

Diversity issues go further than gender. Among the 18 Brazilian women chosen for the executive and for the judiciary, only two are black, and both were nominated for the same department: the Department of Racial Equality Policies. Again, this suggests that the Rousseff administration’s attempts at inclusion and diversity are more symbolic, rather than furthering genuine institutional change.

Beyond simple numerical analysis, the nature of the appointments also reveals the roles that tend to be assigned to the few women in political power.

Among those departments with greater political and economic impacts, only the economic planning and chief of staff offices were managed by a woman during the Dilma government. And even this achievement was not carried into the second term.

The ministries of justice, foreign affairs, defence, health and social security, as well as the BCB and the attorney general’s office, have never had a woman at their highest position throughout their entire history. Although the BCB has had two women on its executive board, it represents only 1.6% of the total number of the BCB executive directors over 50 years.

The ministry of agriculture, perceived as a very traditional department, is finally being led by a woman under this present Dilma administration – but the specific policy areas reserved for women tend to be related to human rights and social communication.
Lagging behind the competition. EPA/Fernando Bizerra Jr
In Brazil, justice and economic policy are still dominated by men – even though globally, there are important advances in female leadership in the economic system. Think of Christine Lagarde leading the International Monetary Fund (IMF), Janet Yellen atop the US Federal Reserve, Zeti Akhtar Aziz commanding Malaysia’s central bank and Linah Mohohlo running the Bank of Botswana.

The endurance of low representation of women in Brazil doesn’t stem from the paucity of female appointees selected by Rousseff – though this is a sobering measure of the underlying problem, especially since there were higher hopes for her government than for any other in Brazilian history.

No, the real problem is a deep structural one.

The idea that Brazil simply does not have enough well prepared women for high-ranking political positions is far too simplistic; the limited representation of women in Brazil’s politics is in large part a product of a masculine social culture and underlying structural institutions that are not equipped to welcome women.

Getting women into representation in leadership positions is critically important for public policy in general – not just because it can increase economic growth, but because it means women’s interests can be better protected in lawmaking.

This is very relevant in Brazil, especially considering the current socially conservative bent of the National Congress. The legislature’s leaders frequently make strident public statements on issues such as abortion – which remains illegal – and appear to have little inclination to improving the harsh reality that Brazilian women face.

The Rousseff government’s progress has been paltry, and there have been disappointing setbacks. What Brazil needs are effective institutional actions, real policies to make office more accessible to women, and high-ranking appointments that are not merely symbolic.

This op-ed was originally published in The Conversation and in Carta Capital (in Portuguese).

Camila Villard Duran is the Oxford-Princeton Global Leaders Fellow at the Global Economic Governance Programme and assistant professor of law at Universidade de Sao Paulo. Barbara Simão and Maria Luciano, researchers at the “PET” group on Sociology of Law at the USP supported by the Brazilian Ministry of Education, also contributed to this piece.
Inclusion