We must speak out to protect our democracy 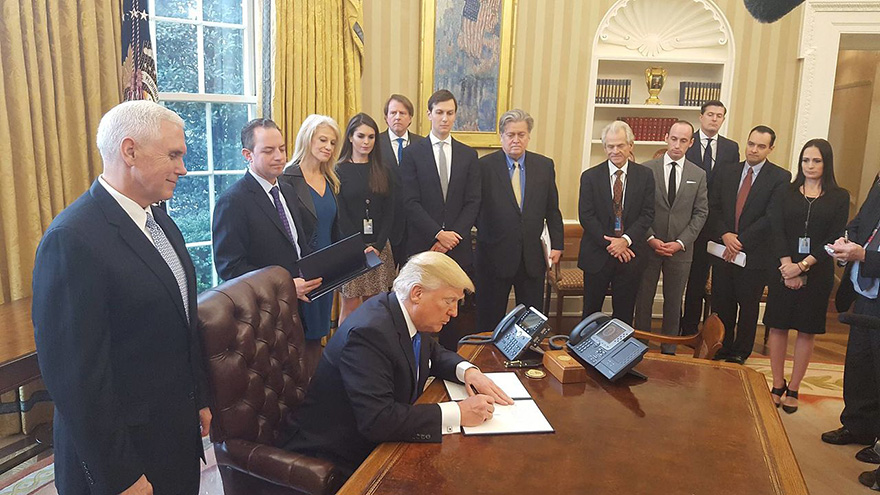 Auden wrote that line as part of an extended poem in 1939 during a period of rising upheaval with the onset of World War II.  In the midst of another period of political upheaval in the US, Auden’s words may well serve as a stark reminder for us. In just two weeks since his inauguration, President Trump has already signed seven executive orders and 11 memos (information correct as of 31st January, as reported in CNN).

From immigration policies that reduce refugee admissions to the of banning certain nationalities’ entry to the US, we have witnessed upheaval policy changes that immediately affect hundreds of thousands of people and has further induced worry on longer lasting global implications. It is in times like these that the importance of speaking out becomes more pressing than ever, especially in speaking out against lies, injustice and abuse of power.

We need to speak out against lies with truth

It comes as no surprise that one of the first rhetoric spin from the Trump Administration is that of “alternative facts”. Expect more “alternative facts” to be dished out, just as we have already seen in immigration policy with wild and undue claims made about the threats from refugees or deficiencies about the current vetting process (case in point see here). The onus is on us to do our homework, to present the evidence that dispels fact from fiction and to speak truth to power. Websites like factcheck.org offer good political fact checking for starters (and a simple Google search is never that hard) but more importantly it’s on us to encourage more evidence-based discourse to immediately call out the lies that cause fear. Because truth is, speaking out against lies is easy to do if we put in the effort and it forms the bedrock to speaking against injustices or abuse of power.

Many individuals have been concerned or angered at Trump’s various executive orders that some would claim as unconstitutional or even un-American. Simply put, many are most worried at the violation of the values we hold dear and the social injustices that may result from the new policies. We need to counter such injustices by not just speaking up to maintain our values but to speak with actions that demonstrates those values. Showing our support on social media is a great first step, but don’t stop there. Showing our solidarity with protests and movements is vital too but let’s challenge ourselves to go one step further by finding ways in which we can genuinely help those affected by the injustices we see. For example, one way is to identify civil society organizations working on these issues and to find ways to support them (for example, this organisation here). We have to remember we are the best embodiment of the values we hold dear.

The final and perhaps most dangerous threat that we need to speak out against is the abuse of power. Many have commented on the ways that the Trump administration is circumventing the checks and balances of the US system. From the shakeup of the National Security Council to the sacking of Attorney-General Sally Yates, these events have led to fears of how Trump is testing and trying to change the democratic structure built in place to ensure accountability. It is this dangerous potential abuse of power that we most need to be careful of. We need to respond with our power as citizens by first becoming aware of such incidents. It’s not enough to just understand the social injustices but equally important to recognise the nuances in executive changes that may affect the future of our democracy and by extension our freedom.

It’s no coincidence that 1984 is back on the best sellers list again. It would serve us well to learn from the lessons of history and to be the “anxious guardians of our democracy” by speaking out today. Because as Edmund Burke once said, “the only thing necessary for the triumph of evil is for good men to do nothing.”

Alexander Chan is an MPP alumnus (Class of  2013) from Hong Kong and is currently a Schwarzman Scholar at Tsinghua University.