Walking in fear as a Muslim 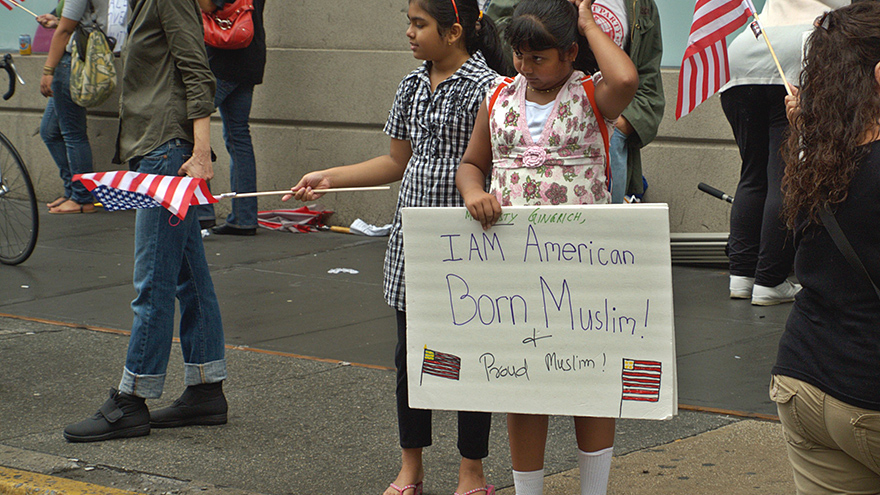 A 12-year-old girl is beaten at school in New York, is called “ISIS” and nearly has her hijab torn off by her classmates. A 16-year-old Somali American dies in a fall from a six-story building in Seattle that his family and the Muslim community in the city suspect was the result of foul play. Rocks are thrownthrough the windows of a Muslim family’s home in Plano, Tex.  A shop owner in Queens, N.Y., is attacked at his business by a man shouting, “I’ll kill Muslims.” This is only a small sampling of the recent violence and hate crimes against Muslims, which have reached record highs.


These days, sermons at mosques in the United States, rather than focusing on community and religion, conclude with advice about how Muslims can protect themselves from attack. The fear that any non-Muslim American feels about his or her safety in the face of terrorism is felt tenfold by Muslim Americans. I am 6-foot-1 and 175 pounds, a Rhodes scholar and student at Harvard Medical School. I am not used to feeling so afraid for my body.

I am afraid that on the train home from the hospital, someone will think my backpack contains a bomb. When I walk through a crowd, I fear being accosted by young men calling me “Arab” or “terrorist.” I am afraid that all the talk of Muslim registries, rabid dogs and closing mosques will lead to someone shooting at the mosque that my mother attends every day. If I feel this way walking down the streets of Boston, with the privileges of a well-educated, English-speaking male, I can only imagine the fear of the many people who share my religion without such privileges.


In his book “Between the World and Me,” Ta-Nehisi Coates writes of the centuries of violence committed against the black body in the United States. As a Muslim at this moment in the United States, I sympathize. I have never been so aware of my body — the feeling of its not belonging, the knowledge of the violence perpetrated every day against those who share my body.

Republican presidential front- runner Donald Trump has been widely criticized for proposing that Muslims be banned from entering the United States. But Trump is not alone. The rhetoric of the Republican field has lifted to new heights the level of bigotry that’s acceptable in the public sphere. Despite his professed love of the Constitution, which explicitly states that “no religious test shall ever be required” as a qualification for public office, Ben Carson has suggested that I, a natural-born American, should never consider running for president. Ted Cruz has stated that the kindness and generosity of our nation should be shared with innocent Christian Syrian refugees — but not innocent Muslims.

The Nov. 13 Paris attacks hold special importance for me, as the following week was the anniversary of my father’s passing. The founder of the first mosque in Oklahoma City, he aspired to be a part of a United States in which that building would belong as much as any church or synagogue. I am pained to imagine his sorrow, if he were alive, at the realization that the American Muslim condition today is worse than it was in conservative Oklahoma in the 1980s.

Muslim leaders should indeed answer the calls to work to improve our communities. But to suggest that the solution lies solely with Muslims is deeply unfair. There are no calls to reform white Christian communities after mass shootings such as the one allegedly carried out by Robert Dear at Planned Parenthood in Colorado Springs. Of course we must ensure our youth are not attracted to radicalization and that all members of our community have sufficient mental-health resources. The same should be said of all religious groups, of any community.

What we, as Americans, need now is solidarity. The physical and political violence perpetrated against Muslims in this country will only worsen unless we stand together against this fear-mongering. No one should be a bystander on a train or at a school as Muslims are assaulted and our rights questioned. We need others to speak out and stand with us.

I am given hope by my friend from Alabama, the son of a pastor, who called me to say he was there for me and was scared for me. I am inspired by my classmate from Compton, Calif., who texted me to ask how we can combat Islamophobia. We need more of these gestures. We need alliances at the community level, within our government and in the media. If we truly believe in liberty and freedom, the time has come to defy hateful rhetoric and immediately begin to make America great again on our own terms.

I don’t know how this story ends. Each night I pray that there will be no more attacks in the name of Islam. I pray that all Americans can come to realize that Muslims are not, by definition, terrorists. I pray for the day I don’t need to pray for these things.

This article first appeared in the Washington Post on December 13, 2015. Mubeen Shakir is a BSG alumnus (MPP Class of 2014) and can be found on Twitter.
Inclusion